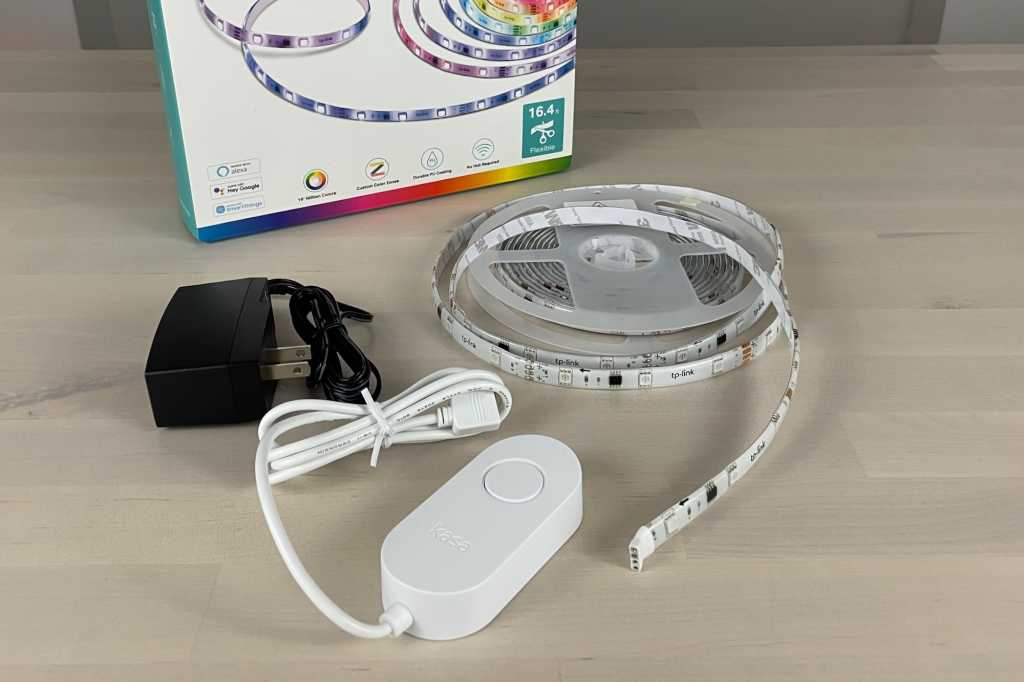 Ben Patterson/Foundry
At a glance

This mid-range, multi-color light strip is easy to set up and use, and it comes with a bevy of scheduling and automation features courtesy of the sleek Kasa Smart app.

Durable, affordable, and easy to use, the Kasa Smart Light Strip KL420L5 is a great way to add splashes of color to your home. Capable of glowing in multiple colors at once, the KL420L5 boasts a sturdy design, easy installation, and Wi-Fi connectivity, meaning no need for a hub. Meanwhile, the Kasa Smart app offers a bevy of scheduling, grouping, and automation features, along with the ability to create your own animated lighting scenes.

The $40 KL420L5 does have its downsides, however, including the inability to string multiple strips together or reuse snipped-off portions. And while it works with Alexa, Google Assistant, and Samsung SmartThings, the KL420L5 isn’t compatible with Apple’s HomeKit platform. For those features, you’ll need to step up to something pricier, such as the HomeKit-compatible Philips Hue Lightstrip Plus.

Like many other LED light strips, the 16.4-foot Kasa Smart Light Strip KL420L5 (we’ll just call it the KL420 from here on out) arrives on a reel that’s wrapped inside a plastic bag. Unspooling the KL420, the 3mm-thick strip has a solid, premium feel thanks to its polyurethane coating, which offers IPX4-rated protection against splashing water from any direction (ideal for under-cabinet use near a kitchen sink, but not outdoors). Incidentally, the more affordable Kasa Smart Light Strip KL400LE (which we’ve also reviewed) lacks the KL420’s polyurethane coating, and it feels cheaper for it.

Besides the light strip itself, the box contains a palm-sized, one-button controller that connects to the strip via a delicate four-pin interface. Also included is a chunky wall wart, although as we’ll see in a moment, its right-angle plug makes up for the bulky design.

The LEDs on the KL420 light strip can shine in up to 16 million colors, and unlike the step-down KL400, the KL420 can glow in multiple colors at once. Indeed, the strip boasts 50 separate color zones, although the number of zones will shrink if you choose to cut the strip to fit. 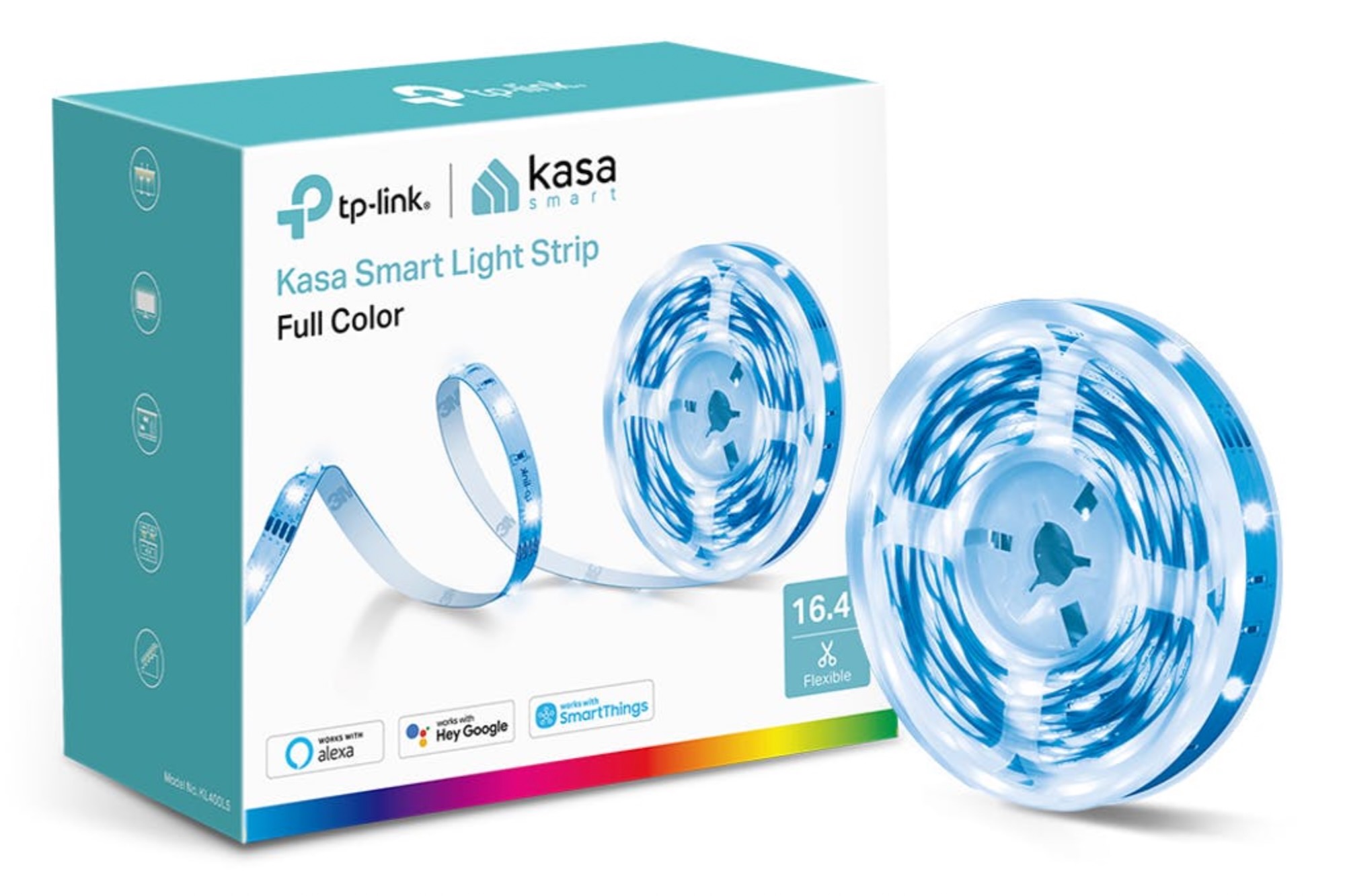 TP-Link says the KL420 can emit about 550 lumens, which (unsurprisingly) isn’t bright enough to light up a room. That said, the strip could light a kitchen counter, or splash enough color on a wall to illuminate steps on a staircase.

The KL420 connects to Wi-Fi networks, which means it doesn’t need a hub. The strip is only compatible with the 2.4GHz Wi-Fi band, but that’s common for smart lights (and other Wi-Fi-enabled smart devices, for that matter).

Setting up the Kasa Smart Light Strip KL420 should be a familiar process for anyone who’s dealt with LED light strips before. The strip has a peel-and-stick backing; you just peel off the thin plastic covering and press the sticky adhesive side on the surface where you want the light strip to go (ideally cleaning the surface first).

Like most smart light strips, the 16.4 foot-long KL420 can be cut to fit, but you must cut the strip at one of several designated cutting points. Those cutting areas (just look for four short gold stripes) are roughly four inches apart, so you’ll need to plan accordingly. If you cut anywhere else on the strip, you run the risk of damaging it.

While the KL420 can be cut, the snipped-off pieces can’t be reattached or reused. Some pricier smart light strips, such as the latest version of the Philips Hue Lightstrip Plus, do let you reattach cut segments, but at $100 for six feet, the Hue light strip is considerably pricier.

I elected to install my test unit on the back of a bedroom dresser, with the strip running along the rear top and sides. Making the KL420 (or any LED light strip) navigate right angles can be a tricky proposition, given that you don’t want to crimp the LEDs. For its part, Kasa suggests twisting the strip in a clover-leaf shape; doing so worked for me, but it also leaves the strip prone to gradually peeling off the surface it’s attached to. Careful surface cleaning and light strip application are key in such a right-angle scenario.

As I mentioned earlier, the KL420’s power supply is a chunky wall wart, but thanks to its right-angle plug, I was able to plug it into a socket directly above another big wall wart.

Once the light strip is powered up, you can connect it to Wi-Fi using the Kasa Smart app. Doing so involves connecting your phone to the KL420’s private wireless network from your devices Wi-Fi settings; once that’s done, you return to the app, pick out your home network, and enter your credentials. That’s a fair number of hoops to jump through, but the process worked on the first try for me. The app then lets you name the light strip, and if you haven’t already installed the strip itself, the app will even guide you through the steps.

As I previously mentioned, the Kasa Smart app lets you group multiple Kasa light strips together–and in fact, you can group practically any Kasa smart devices, including smart bulbs, security cams, smart plugs, and so on. I grouped the KL420 with Kasa’s KL400 lights strip, both of which are installed in my bedroom. I was able to turn the group on and off, as well as change the color, brightness, and effects of the grouped strips. That said, I couldn’t put the group on a schedule, nor could I include the group in Kasa Smart scenes. But as I’ll describe in a moment, you can create a single Kasa Smart scene with multiple Kasa Smart products and then put that scene on a schedule.

To control the KL420 on its own, you navigate to a multi-tabbed screen in the Kasa Smart app. Tapping the Power tab, for example, reveals a large, friendly looking power button, while the Brightness tab serves up a round brightness slider, and the Color tab boasts a large color wheel. Beneath those three tabs are three more tabs; one for the strip’s various color effects, another for scheduling, and a third that shows the strip’s power usage. All those tabs can be confusing at first, but eventually you’ll get the hang of it.

At the top of the screen are five small bubbles that serve as presets; tap one, and it will save the currently selected color and brightness, then tap it again to activate those color and brightness settings. Tapping and holding a bubble will clear out the preset, allowing you to start over. This quintet of preset bubbles is among the Kasa Smart app’s best features.

You can put the KL420 on a daily or weekly schedule using the Schedule tab. There are no “wake up” or “go to sleep” schedules, nor is there a vacation mode, but the app does offer “sunrise” and “sunset” triggers. Even better, you can access those aforementioned preset buttons from the scheduling tool.

The Effects tab lets you apply one of more than a dozen animated lighting effects, from “Aurora” and “Bubbling Cauldron” to “Rainbow” and “Valentines.” If you like, you can create your own animated or static effects with custom colors and speeds–and yes, the strip will indeed glow and pulse in multiple colors at once. The effects tab also boasts 10 basic color swatches, as well as the five preset bubbles.

Besides adding the KL420 to a group, you can also add it to a “Scene,” which can be triggered by a Smart Action in the Kasa app. So (as I mentioned earlier) while you can’t put a Kasa light group on a schedule, you could add several Kasa devices, including the KL420 and other lights, to a scene, and then put that Scene on a schedule. For instance, you could create a Scene that sets a pair of KL420 strips to a certain lighting effect or preset, and then have that scene triggered at 5 p.m. each day. Scenes can also be triggered by other events, such as a button press on a Kasa switch, a motion alert from a Kasa security camera, or an auto-off timer.

The Kasa Smart Light Strip KL420L5 works with Alexa, Google Assistant, and Samsung SmartThings, and getting the strip up and running in those ecosystems was no problem. Once you have the KL420 set up with Alexa or Google Assistant, you can control it with voice commands, such as “Alexa, set the light strip to green,” as well as use it in routines.

It’s also worth mentioning that any scenes you create in the Kasa Smart app are immediately recognized by both Alexa and Google Assistant, which means you can put scenes that include the KL420 in Alexa and Assistant routines, as well as trigger them with voice commands.

On the minus side, the KL420 does not work with Apple’s HomeKit platform, as does the pricier Philips Hue Lightstrip Plus.

If you want to add some colorful light strips to your home and you’re not invested in the Hue or HomeKit ecosystems, the Kasa Smart Light Strip KL420L5 makes for a good choice. It’s affordably priced, it works with Alexa, Google Assistant, and SmartThings, it’s easy to set up, and the Kasa app offers loads of scheduling and automation options. If you don’t need the KL420’s multi-color capabilities, you can always step down to the cheaper, single-color KL400, which lacks the KL420’s polyurethane coating but is otherwise equivalent in terms of design and features.

Updated shortly after publication with additional details provided by TP-Link, including an IP rating and brightness specifications.