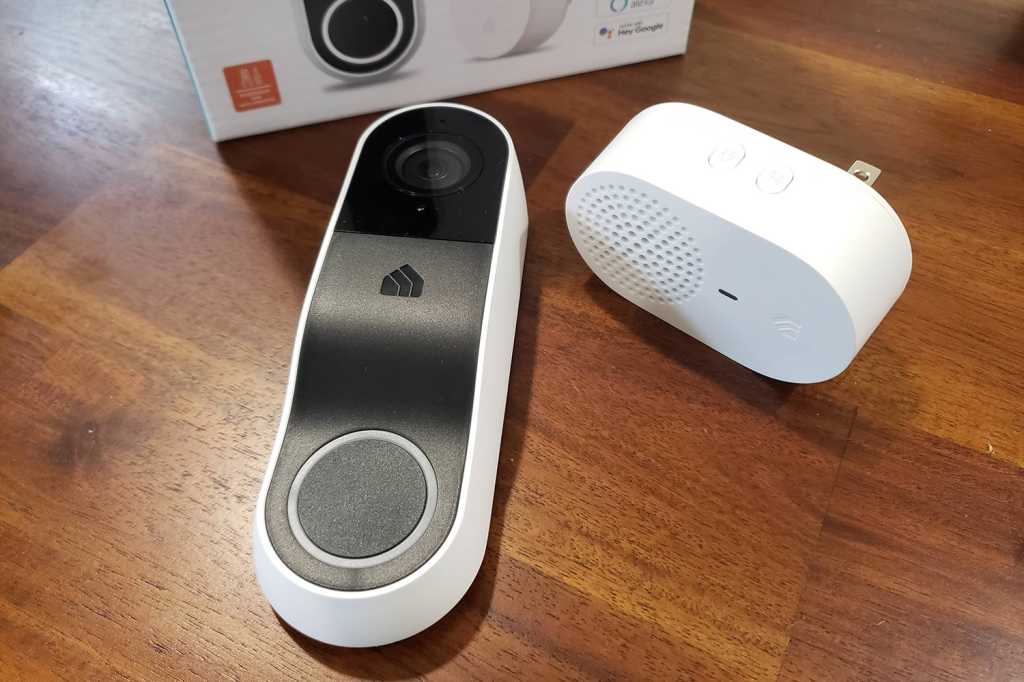 Image: Martyn Williams/Foundry
At a glance

The Kasa Smart Doorbell offers a great picture, plenty of settings, and comes with the option of 24-hour recording onto a memory card, but a cloud subscription is required to share recorded clips via the app.

The Kasa Smart Doorbell from TP-Link is the latest in the manufacturer’s long line of home security and automation products. It’s compact, offers great image quality, and boasts a variety of customization options, but you’ll need a cloud subscription to make the most of its many features.

At $60 (at time of review), the doorbell offers some features that are unusual in this mid- to lower-end price range, such as the ability to continuously record onto local storage.

I tested the Kasa Smart Doorbell, which works with Alexa, Google Assistant, and Samsung SmartThings (through the “Works with Kasa” program), over the course of a week. The installation process was simple and the app didn’t give me any problems. The unit did suffer from a few mysterious and momentary connection glitches, but it always managed to recover on its own.

The doorbell relies on wired power, which (typically speaking) means using your existing doorbell wiring. With power in place, installation was easy. The doorbell clips onto a plastic bracket that attaches with just a couple of screws. The wires connect directly to terminals on the rear of the doorbell. Once the doorbell was powered up, I added it to the Kasa app and connected it to Wi-Fi. Installing the indoor chime is as simple as plugging it into a wall outlet. To sync it with the doorbell, I had to press a sync button for three seconds, and the rest happened automatically.

The chime unit offers seven different audible chimes, and the selection is … interesting. The default chime is “Jingle Bells,” which wasn’t a very seasonable choice for April. There are also a few other basic doorbell chimes, along with one that sounds like the chime before a broadcast at an airport, the Big Ben chime, and another chime that resembles the T-Mobile jingle.

The doorbell itself is IP64 rated, which means it offers protection against dust ingress and splashing water. In other words, it should be fine outside in both rain and snow.

The doorbell camera offers a sharp, well balanced image with good colors and a 160-degree viewing angle, which is comparable with competitors and enough to see everything going on around your porch. During standard use, the corners of the video frame are slightly cut off due to the wide-angle lens, but that didn’t affect image quality or use.

Several different settings allow you to customize when and how the camera records. There’s a basic setting to enable standard motion detection, while a separate setting lets the camera differentiate between a person and another moving object, such as a passing car or a tree branch blowing in the wind.

There are a couple of further adjustments: one for sensitivity, which is pretty common on security cameras, and another for the length of motion, a less common but quite helpful setting that allows the doorbell to ignore brief (up to 5 seconds) periods of activity. The camera can also be set to trigger on loud noises, although you’ll want to turn this setting off if you live near a road.

The Kasa app lets you create a “Do Not Disturb” schedule that will keep the doorbell from ringing or triggering push notifications. There’s also a button that lets you toggle Do Not Disturb mode on and off at will.

When someone does press the doorbell, the indoor chime unit will sound (assuming the doorbell isn’t silenced), and you’ll be able to see and hear the person through the app. At that point, you have the option of chatting with your visitor via two-way audio, or having the doorbell play one of several pre-programmed messages, ranging from a friendly “I’ll be there in a minute” to the more aggressive “You are trespassing; police have been called.”

During my tests, I set the doorbell’s motion sensitivity to 6 (out of 10) and found the camera to be reasonably responsive to motion, but not to the point of triggering on small movements, such as bugs flying in front of the lens. At one point, I moved the sensitivity up to 8 and woke up to a bunch of movement alerts that, as it turns out, were triggered by car headlights on a garage door. Setting the sensitivity setting back to 6 eliminated the false alarms.

If constant alerts are a problem, they can always be cured with motion zones. The device allows several to be set to limit detection to certain parts of the video frame.

One of the benefits of the Kasa Smart Doorbell is that you can slot in a microSD card and enable 24-hour recording. This negates–for the most part–the need for a cloud subscription, and during my test I relied exclusively on the memory card.

If you do decide to subscribe, there are two subscription levels, one for $3 per month and another for $10 a month. The former covers a single camera, while the latter covers up to 10 cameras on a single account. Both plans offer up to 30 days of video storage. It’s worth noting that unlike just about every other doorbell maker, Kasa requires a credit card number to access a free trial.

While you can skip paying for a subscription if you use local storage, there is a key benefit to Kasa’s storage plans: the convenience of easily sharing clips of motion events. Although you can jump to the action in the 24-hour timeline stored on a local microSD card (assuming you have one inserted and recording is enabled), a paid subscription is required to share or download clips using the Kasa app.

Now, there is a workaround, but it’s a hassle. The Kasa Smart Doorbell stores video clips on its microSD memory card as a series of minute-long MP4 files, organized into folders by day and hour. That means you could remove the memory card, find the video files using File Explorer on a PC, and then save or share the raw MP4 files. If that sounds like a pain compared to simply sharing recorded clips from the app, it is.

The KD110 Kasa Smart Doorbell is a well made doorbell that worked reliably during my testing, capturing sharp images and successfully catching motion events without going overboard (thanks in part to its detailed motion detection settings). I also liked the bargain price and 24-hour recording options. The only downside is the inability to easily download without paying extra, which could be a big disadvantage for those looking to share captured video clips.