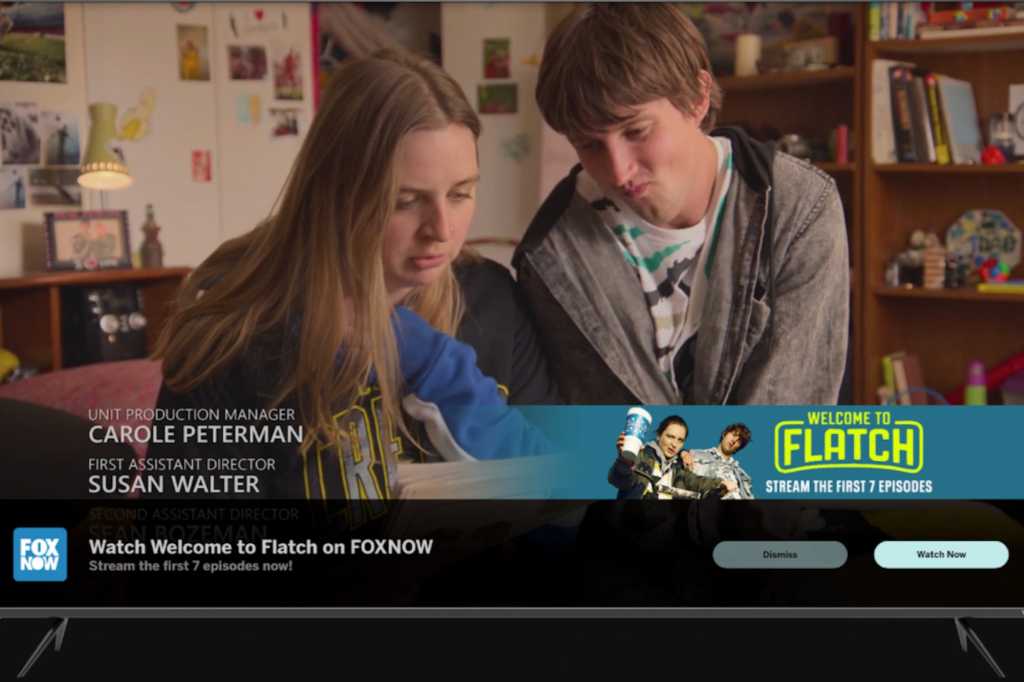 The next time you watch a live Fox show on a Vizio TV, you might see an “interactive” ad overlay delivered by the TV itself.

Fox is the first network to test Vizio’s new Jump Ads, and it’s currently running the overlays at the end of the premiere episode of “Welcome to Flatch.”

The banner ad sits at the bottom of the screen, with a “Stream the First 7 Episodes” promo and a message that reads “Watch Welcome to Flatch on FOXNOW.” In the bottom-right corner of the screen are “Watch Now” and “Dismiss” buttons.

Responding to a query from TechHive, a Vizio rep said that Jump Ads are a “viewing solution … meant to solve problems like content discovery and navigation.”

Asked whether the ads might be used for other purposes, such as hawking products or other TV programs, the rep said: “When it comes to advertisers outside the programming world, VIZIO’s still taking a content-first approach. Rather than ads [for a product], this means exclusive content and viewing options specifically for that viewer and presented by a brand.”

The new Jump Ads are powered by Automatic Content Recognition, or ACR, a popular (with smart TV manufacturers) and controversial (with viewers) technology that scans the pixels on a TV screen to determine what program is being viewed.

In the case of Jump Ads, Vizio says it’s using ACR to detect when a participating show is being watched, while “additional proprietary Vizio software” serves the ad overlay at the appropriate time.

Vizio isn’t the only smart TV manufacturer to employ ACR; in fact, most of them do, partly to collect and sell data about viewing habits, but also to help personalize a TV’s user interface. We’ve previously noted that Roku TVs use ACR tech to show users where they can stream episodes of live TV shows, similar to Vizio’s Jump Ads experiment (albeit without the live overlays).

Most TV manufacturers that use ACR allow users to turn the technology off. For Vizio SmartCast TVs, the procedure is to press the Menu button on the remote, then select System > Reset & Admin, highlight Viewing Data, the press the right arrow to turn the setting off. Toggling off the Viewing Data setting will disable the Jump Ads, Vizio confirmed.

Earlier this year, there was a brief kerfuffle when Roku users spotted ad overlays for random products on top of live TV shows, including at least one NFL football game. Roku eventually blamed a bug for the issue, which doesn’t appear to have recurred.

Updated shortly after publication with comments from Vizio.