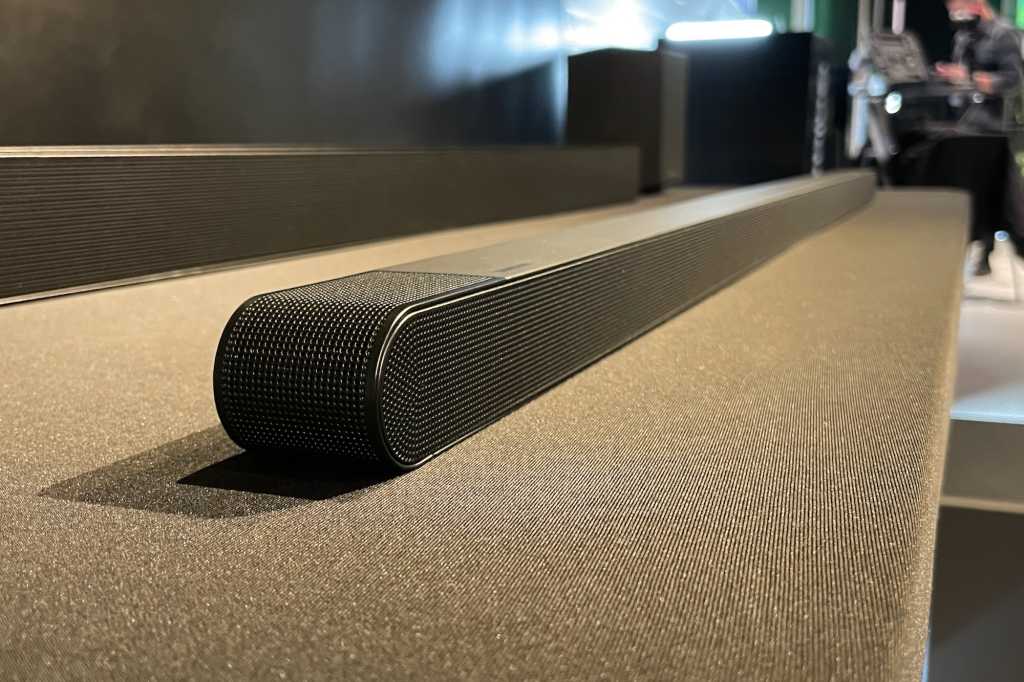 Samsung already revealed at CES back in January that its upcoming–and aptly named–Super Slim Soundbar would be just 1.6 inches thick, but that figure didn’t really register until I saw the ridiculously thin speaker in person last week.

Seeing it up close and personal at a hands-on event in Manhattan’s Meatpacking District, I was quite simply floored by the Ultra Thin Soundbar’s svelte, delicate design. It’s not so much a soundbar as a soundstick. I’ve never seen a soundbar quite like it.

While the Ultra Thin Soundbar is about the same width as a conventional soundbar–say, roughly 40 inches across–it’s only slightly thicker than your average closet rod. The Samsung exec I chatted with wasn’t quite sure of the soundbar’s exact weight, but after hefting it, we agreed that it couldn’t weigh more than eight pounds, if that.

Despite its super-slim and light design, the Ultra Thin Soundbar manages a 3.1.2 configuration, with the low frequencies coming courtesy of a compact, 6.5-inch wireless subwoofer. You’ll be able to upgrade the soundbar to a full 5.1.2 channels with a wireless surround speaker kit.

Two upfiring drivers for Dolby Atmos and DTS:X height cues are visible through the top speaker grille on either side. That means the soundbar bounces height effects off the ceiling rather than relying on virtualization for the height channels. I inquired about the quantity and size of the soundbar’s other drivers, but was told that Samsung “isn’t talking about that yet.”

While the Ultra Slim Soundbar was on prominent display during Samsung’s hands-on event, it wasn’t actually demonstrated, so I can’t offer any initial impressions about its audio performance. With its slim but wide design, however, the Ultra Slim Soundbar may well have the edge on other compact soundbars that go for a narrower design, which means they often depend on virtual sound modes to widen their soundstages. I’ll need to actually hear it to be sure.

The Ultra Slim Soundbar can be wall-mounted, and at the Samsung event, one of the super-thin units was mounted under the latest version of The Frame (here’s our review of an earlier model of The Frame). The soundbar also comes with an appropriately slimmed-down remote that can sit unobtrusively on top of the speaker.

Not only is the Ultra Slim Soundbar’s remote small, its selection of inputs is small as well: specifically, there’s one USB-C-style HDMI-ARC port, and that’s it. A nearby microUSB connector is only for installing firmware updates.

Alongside–and in stark contrast to–the Ultra Slim Soundbar at the Samsung showcase was the manufacturer’s new, and massive, Q990B soundbar, an 11.1.4-channel behemoth that replaces 2021’s flagship, the Q950A.

The Q990B retains the basic design and channel configuration of the Q950A, but its wireless surround speakers will come with a redesigned, slightly vaulted top, while its subwoofer comes with a new “acoustical lens design” that’s designed to deliver, deeper low-frequency performance.

The soundbar will also ship with Samsung’s revamped SpaceFit room calibration feature, which no longer needs help from a Samsung TV to detect the acoustics of a room.

Samsung has yet to reveal pricing for any of its 2022 soundbars, including the Ultra Slim Soundbar and the Q990B. That said, the units are expected to ship in the coming weeks. 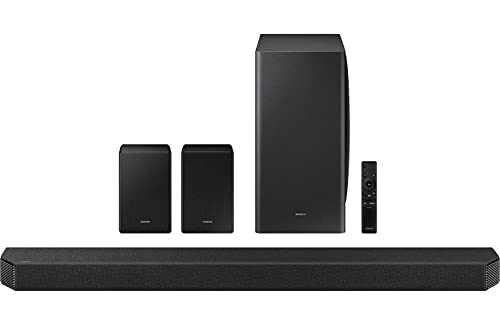