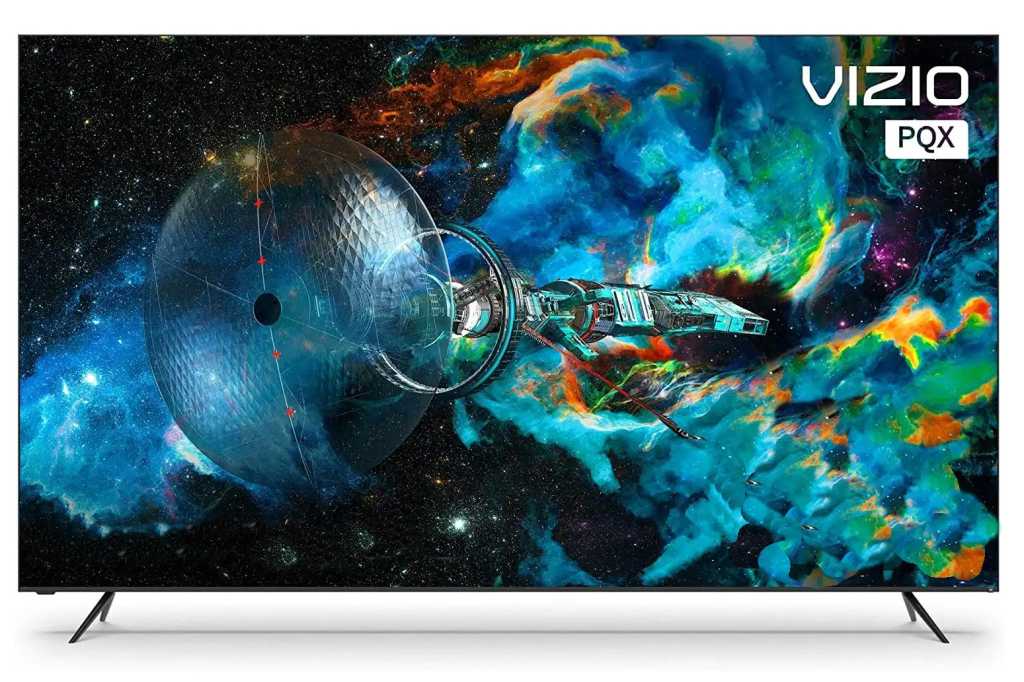 Image: Vizio
At a glance

Vizio’s PQX-series smart TV (the 85-inch P85QX-J01 is reviewed here) is the unique beast in the product line we mentioned in our earlier PQ9-series review, delivering three times the brightness of that 65-inch model. For about $1,000 more than entry-level TVs of this size, it delivers both a tremendous number of nits and quantum dot color. The picture is very good with real world material, especially HDR, though a few rough edges showed up in our stress tests.

The P85QX-J01 is an 85-inch class (84.5 inches diagonally), 16:9, 4K UHD (3840×2160 pixels) display. It’s large by most standards, and definitely more in line with home theater than bedroom use. Then again, I don’t know what you do in the bedroom, so ignore my comment. Suffice it to say that It’s a big TV requiring a fairly large amount of wall space.

Keep in mind that the prescribed viewing distance for any TV is 1.5 times the screen size, or about 10.5 feet in this instance–move your couch back if you buy one. The P85QX-J01 weighs in at around 100 pounds, and sports a 400 x 400mm VESA mount pattern if you do plan to marry it to the wall.

The refresh rate is 120Hz, there are 210 backlighting zones, and the TV will push approximately 3,000 nits (we measured slightly less). That level of brightness makes for an impressive HDR experience. On that front, the P85QX-J01 supports Dolby Vision, HLG, HDR10, and HDR10+.

Ports include two 4K/120Hz HDMI 2.1 ports, plus two of the more mundane HDMI 2.1 ports, one of which supports eARC. Also onboard is a USB 2.0 Type-A port, composite video, and L/R RCA analog audio inputs, L/R analog audio outputs, optical S/PDIF audio out, as well as coax and ethernet ports. The Wi-Fi is 802.11ac and there’s Bluetooth on board.

You can, of course, control the TV with Vizio’s own SmartCast voice commands, or employ either Google Assistant or Amazon Alexa with the relevant smart speaker. Apple’s HomeKit smart home ecosystem is supported, too.

To help out gamers, the  P85QX-J01 supports variable refresh rate (VRR) as well as AMD FreeSync, and then there are those 120Hz ports.

I don’t normally talk much about setup; however, the last couple of Vizio TVs I’ve tested have had difficulty grabbing an IP address over the ethernet in our lab. In this particular instance–difficult means I never got the P85QX to connect to the internet using a cable.

There were no issues with Wi-Fi, as long as it wasn’t portal-based (i.e., logging on using a web browser). Ethernet is a piece of cake with most TVs, or at most requires power cycling. I like wired connections, and Vizio needs to address this issue.

Beyond connectivity, there was simply the bulk and weight to deal with. You’ll definitely want at least two people on hand to manipulate the TV without damaging it. A third to clear the way and spot the primary lifters wouldn’t hurt either.

Vizio has updated its SmartCast user interface to the point where it’s the best thing going when it comes to organizing content. It uniquely (to my knowledge) merges all streaming, curated, and cable/OTA (over the air) content into the channel guide, which is very cool. Most channel guides are limited to curated and OTA content. It won’t work, however, unless you connect to the internet (see above).

Vizio’s XRT140 remote control is minimalist in terms of buttons, but it works well in conjunction with the SmartCast interface. There’s also a microphone on board if you want to use Vizio’s, Google’s, Amazon’s, or Apple’s voice assistants.

Vizio’s SmartCast app is available for iOS and Android. It’s not as focused or quick as the dedicated remote, but phone-centric users might prefer it. It’s also a good backup for those times you lose the physical remote in the couch cushions.

Overall, the P85QX-J01 delivered a very good picture with real-world material at its default settings. It was especially good at reducing moiré and other artifacts that generally appear in detailed areas that are shifting or being panned.

When I kicked up the brightness a bit, however, there was noticeable blooming around bright objects on dark backgrounds. To be fair, at 2,660 nits (our measurements) the TV produces a lot of peak brightness.

There are a lot of dimming zones, approximately 790 according to Vizio, and they’re smoothly transitioned; indeed, the zone counter I use was basically useless because the dimming was so smooth. That said, there’s still a lot of light leakage.

Besides the leakage (typical of LCD panels), the TV fell short in the Spears & Munsil benchmark tests that display angled fine lines–there was a great deal of distortion here. The TV also had problems with non-uniform gray backgrounds: The backlighting tended to add what we perceived as a slightly yellowish clouding anywhere there weren’t bright objects.

Three of use observed this, and it was disconcerting to say the least.

When we switched display modes (“vivid,” “gaming,” etc.) and viewed the same light gray backgrounds, random purple patches would appear. Fortunately, you won’t encounter a lot of gray screens outside of benchmarks. We also noticed odd artifacts during some other rendering tests. The good news is that none of this affected any of the movies or other video material we watched.

Motion compensation was top notch, although I had to knock it up a degree or two from the default for my taste (I hate judder). Color and screen uniformity were both generally good, although getting close to the TV did reveal some exceedingly minor clouding that you’ll likely never notice.

The sound from the unit’s dual speakers and 15-watt amplifier is meatier than average, and it can get loud while remaining clean. Still, I’d count on augmenting the audio at some point for the best movie and TV-show experiences.

For everyday TV and movie viewing (especially with HDR material), the Vizio P85QX-J01 is a very good set,. That said, the smaller (65-inch) PQ9-series TV did a much better job of processing overall. But then, its workload is much easier, because it has fewer dimming zones and less brightness to manage.

The Vizio P85QX-J01 is an impressive TV

I was impressed with the Vizio P85QX-J01’s real-world image quality, especially its HDR, though it suffered more problems in stress tests than the 65-incher. This can probably be laid at the feet of the increase in dimming zones and three times the brightness. Leave it at the defaults and you’ll like it.