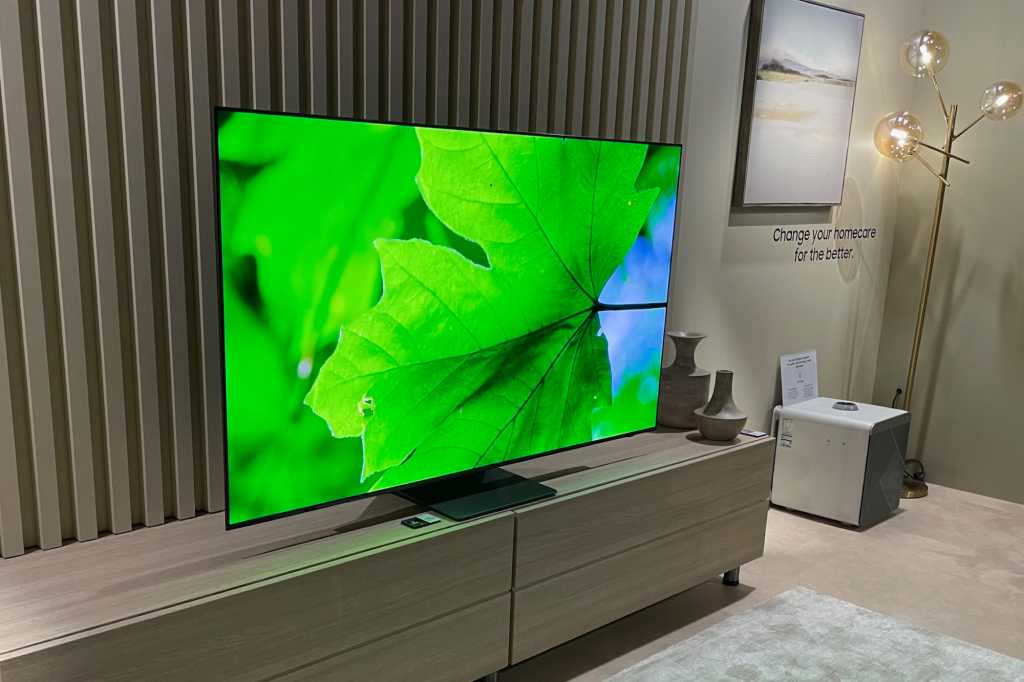 Seeing is believing, and we’ve finally had a chance to lay eyes on Samsung’s new QD-OLED TV, a set that promises to deliver brighter, more accurate colors than existing OLED panels by utilizing quantum-dot technology. We also spent a little time with Samsung’s new and improved The Frame, a “lifestyle” TV designed to hang from your wall like a work of art.

Slated to ship next month in 65- and 55-inch sizes, the Samsung S95B 4K TV aims to boost the brightness of its OLED panel with red- and green-emitting quantum dots resulting (theoretically) in purer and more accurate colors. Existing RGB+W OLED panels, on the other hand, use white sub-pixels to boost brightness, which desaturate the colors.

The news of Samsung’s QD-OLED panels marks an exciting development for the TV industry, and we’re anxious to get the S95B into our lab to find out just how accurate its colors are. In the meantime, I had the chance to see the S95B in person last week during a Samsung hands-on event in Manhattan’s Meatpacking District.

Naturally, I wasn’t able to properly evaluate the set’s picture quality in Samsung’s brightly lit, showroom-like setting, and in only a handful of minutes. But studying the 4K images of swimming turtles and gently swaying tree branches (as one usually sees during these demos), I can say that the S95B’s screen looked about as bright and vivid as one could expect from an OLED, with plenty of detail and colors that pop. Whether the S95B’s colors are more accurate than those of conventional OLED TVs remains to be seen until we can evaluate one using our usual criteria and in our own test environment.

Looked at from the side, the S95B has an impressively razor-thin profile with a thin but nonetheless noticeable bezel. A protruding module in the back of the set houses the TV’s 60-watt, 2.2.2-channel speaker system, which supports Dolby Atmos. The S95B’s stand appears narrow (handy in terms of both placement and soundbar cable management) but solid.

Disappointingly (and similar to Samsung’s other TVs), the S95B does not support Dolby Vision, which means you’ll need to settle for garden-variety HDR10 when it comes to such streaming services as Netflix and Disney+. The set does support HDR10+, however, which is employed by the likes of Amazon Prime Video.

Meanwhile, I also checked out Samsung’s revamped version of The Frame, which arrives with a new, anti-reflective coating and a 10-percent boost in its color gamut.

While the older, glossier The Frame made Monet’s Garden at Sainte-Adresse look like a print sitting behind glass, the newer frame with its anti-reflective surface looks almost like the canvas itself. You can see the pixel structure if you get up close, of course, but from six feet away, the illusion is quite impressive. Again, however, I should note that I only spent a few minutes with the revamped The Frame, so our final word will have to wait for our full review.