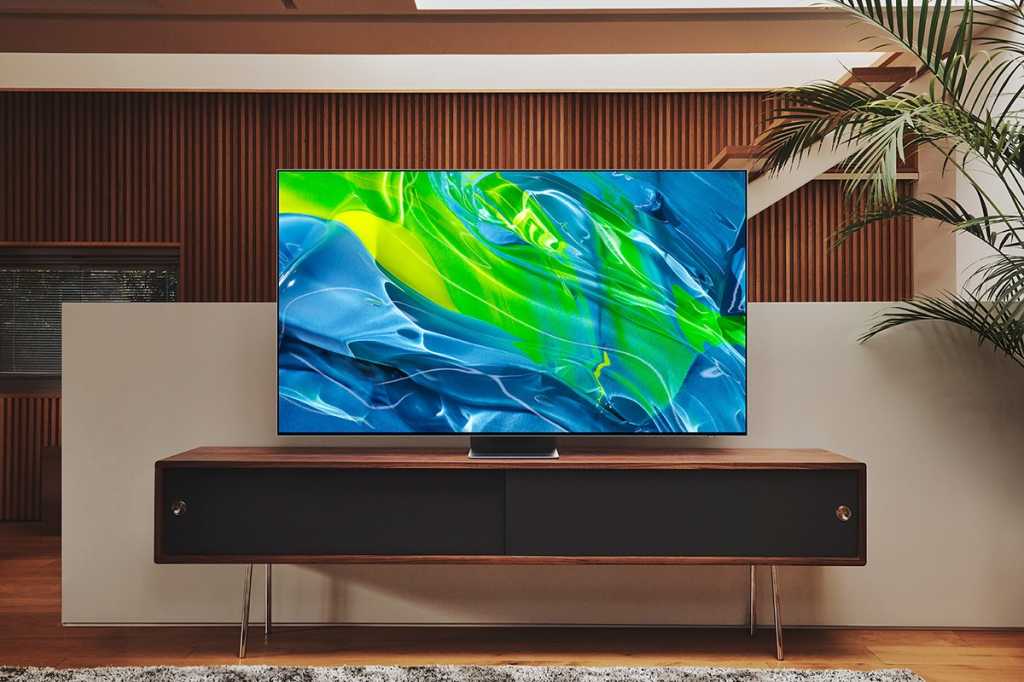 We were jazzed by the news back in January that Samsung was prepping an OLED panel that uses quantum dots to boost color accuracy, and now comes word that consumers will get their first taste of the new OLED sets next month.

The arrival of the S95B is a big deal in the OLED TV market, and while they’re pricey compared to typical OLED sets–$2,199.99 for the 55-inch version, or $2,999.99 for the 65-inch model–they promise the kind of bright but pure colors that are typically reserved for those in the video production industry. We’re eager to get eyes-on with the S95B ourselves.

Besides its QD OLED tech, the S95B arrives with Samsung’s Neural Quantum Processor 4K for picture upscaling, 4K@120Hz support with VRR (variable refresh rate) on all four of its HDMI 2.1 ports, a single HDMI eARC port, an integrated 60-watt 2.2.2-channel speaker system with Dolby Atmos, and Samsung’s Q-Symphony technology for syncing its speakers with Samsung soundbars. HDR10+ is supported but not Dolby Vision, which is typical of Samsung sets.

Samsung also announced sizes and shipping dates for its other 2022 TVs, most of which were announced back in January during CES.

The company’s 2022 Neo QLED line, which boasts improved mini-LED backlighting zone control as well as the ability to identify and highlight the focal object in a scene, will arrive starting this month.

Also coming soon are Samsung’s 2022 soundbars, including its new flagship, the Q-Series HW-Q990B, and the 1.6 inch-deep Ultra Slim Soundbar.

Besides adding side- and up-firing drivers to more of its Q-Series soundbars this year, Samsung is adding Dolby Atmos Music support to its Atmos-enabled models, a new “Dual Atmos” feature that allows for a Dolby Atmos audio to be played from a Samsung TV and soundbar simultaneously, and wireless Atmos support coming to new Q700 and higher-end models. Improvements to Samsung’s Q-Symphony and SpaceFit room calibration have also been promised.

Samsung says its 2022 soundbars will ship between late April and early June. Pricing hasn’t been announced.

We’ll have full reviews of Samsung’s latest TVs and soundbars, including the QD-OLED-equipped S95B, once we check out some review units.