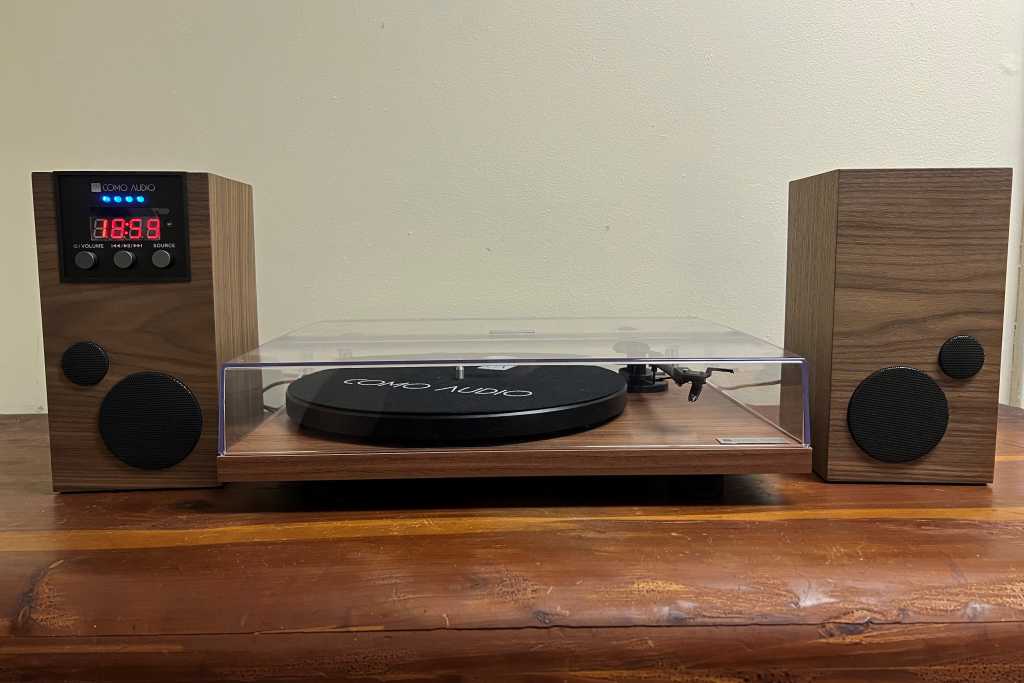 This review will dive into the turntable first, then the Bluetooth streaming and, finally, describe how the two devices integrate when used together.

The Como Analog Turntable is also called the Turntable Analog on the company’s site. Pick which term works for you and know that this dead-simple turntable is a great mid-level solution for vinyl listening.

How simple is it? The belt-drive turntable comes with an integrated phono pre-amp and its tonearm is pre-balanced, so novices can plug and play right out of the box. A three-setting power switch on the left side of the plinth selects 33rpm, 45rpm or off positions. There’s a lever to raise and lower the tonearm, but you’ll need to physically return the tonearm to its rest.

The turntable is available in either a walnut or piano black gloss (vinyl in both cases) and measures 16.3 x 4.65 x 12.6 inches (WxHxD) with its removable transparent cover in place; it weighs 11.68 pounds. The plinth is made of MDF but the walnut vinyl on our review unit looked great.

Como Audio ships the turntable with Ortofon’s OM 5E cartridge, a solid choice given this turntable’s retail price. If you’re someone who likes to test things out for themselves, the Analog Turntable comes with a Pro-Ject tracking force gauge/protractor for more detailed alignment or installation of future cartridge upgrades. The company touts its 300mm heavy steel platter and an included audio cable with a foil shield to reduce RF interference and 24K gold-plated RCA connectors.

The built-in preamp allows you to plug the turntable into any amp or speaker with an Aux input. If your preamp has a phono input, switch to the Phono Out setting under the chassis near the RCA outputs and you’re all set.

Como Audio has also included a full-color setup guide with photos (and not too many words) that makes setup remarkably clear and easy. What seems like a nice bonus for experienced users will make life much easier for newcomers to vinyl, especially since it shows exactly how to set up the belt-drive system.

The Blu streaming stereo system has one foot in the wireless present and one foot in the analog past. The left speaker acts as a Bluetooth receiver and amplifier, while the right-hand speaker connects to the left with a wire.

We may live in a world overpopulated by Bluetooth speakers that promise to pair up and stay synced, but all too often, the technology can’t seem to keep a music source and multiple speakers playing without dropouts. The engineers at Como Audio embraced an elegant and practical solution: Use speaker wire to connect a pair of speakers that will ideally be placed 6 to 8 feet apart.

Guess what? No dropouts ever, at least over the several weeks I’ve been testing the Como Blu. The system uses Bluetooth 4.2 and can remember connections with up to five devices. Once you’ve connected to a source, you can stream music from a subscription service, play songs from your personal music library, or listen to radio or podcasts.

There’s also an Aux input that allows you to plug in a CD player, MP3 player, cassette deck, turntable, or anything else that pumps out music through an audio cable. A Source knob on the front of the left speaker switches between Bluetooth and Aux when you press it.

That’s it. You’ve got two playback options. Of course, you can switch out Aux input devices as much as you might like, but the Como Audio Blu is really designed for listeners who prefer to focus their options on what’s in front of them.

In addition to the Source knob, there an on/off knob that also controls volume and a third knob that plays and pauses the music or skips forward and backward when you turn it. Once again, simple, clear design and function makes this system a joy to use.

The Como Blu is perfect for use in an office or living area because the system’s left speaker has a digital clock display that displays in either 12- or 24-hour format. Pair the system with an iPhone and the time automatically sets itself. The good news for light sleepers is that the time disappears when you power down the Como Blu. The unit doesn’t have any alarm clock function, so constant display of the time isn’t needed.

I tested the Como Blu with a power supply plugged into the wall, but you can buy an optional battery pack for $29.95 if you want to use the speakers as a portable system. The 2200mAh, 14.8V Li-Ion battery pack promises 8 hours of playback on a charge. Since these speakers come genuine walnut veneer, I’d hesitate to carry them out of the house since that veneer could easily chip once you’re banging them around.

The cabinets are made of MDF. Rear bass ports double as carrying handles for each speaker. There’s a knob to adjust bass level on the rear of the left speaker and a headphone jack for private listening. One nice feature for those who like it loud is a mute button on the top of the left speaker that’s perfect for those times when someone wants to talk to you right now and scrambling for the pause button in your music app would just take too long.

The Como Blu system accurately reflects the quality of the source. That means these speakers don’t do much to cover the flaws in old 128Kbps mp3 files or the output from streaming services that offer less-than-lossless quality. Even though the Como Blu doesn’t support the most advanced streaming protocols, lossless or better music sources sound exceptionally good on the system.

The Como Blu speakers really shine when paired with the Analog Turntable. They make an excellent no-fuss system for anyone who’s devoted to today’s most popular listening formats: vinyl and streaming. Switching between the two sources is easy and reliable and there’s no fuss when it comes to powering up and slapping an LP on the turntable.

Ease of use counts for a lot for anyone who new to home audio. Como Audio has created a system that can be set up by almost anyone in just a few minutes and sounds good enough that it should provide listening pleasure for years to come.