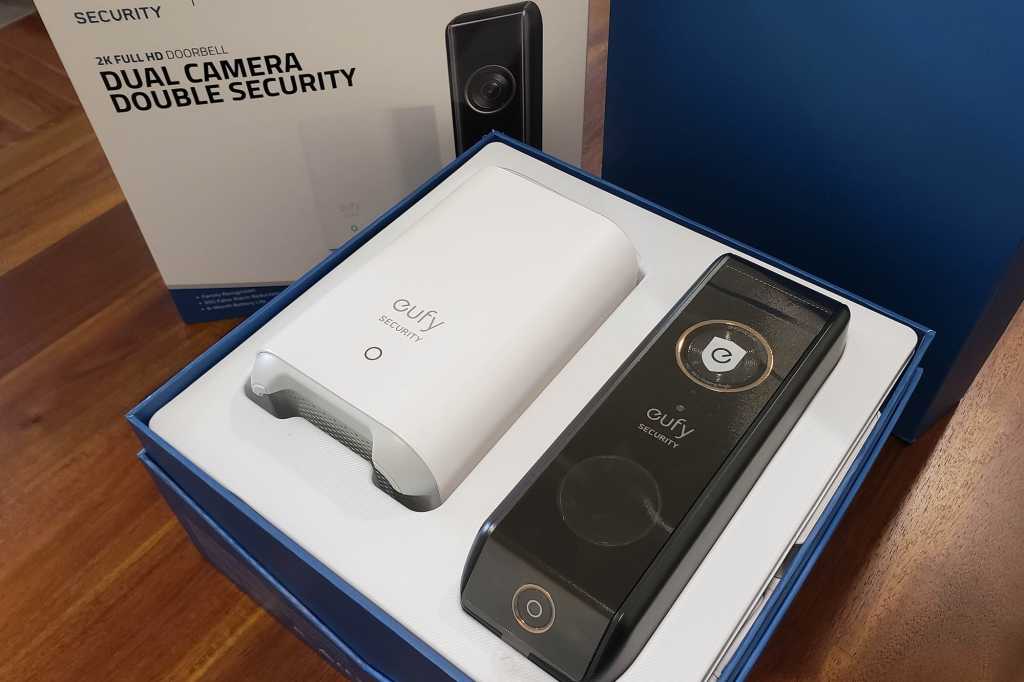 Martyn Williams / Foundry
At a glance

The dual-camera design on this clever video doorbell is no gimmick, and the local video storage makes it an even better value.

There’s a lot to like about the innovative Eufy Video Doorbell Dual. The device packs two cameras: one to look out over your porch and another that looks down at packages. It also comes with some clever AI functions and a base station that provides local storage for video clips, meaning no monthly fee.

The battery-powered doorbell clips into a mounting unit that you can secure to your wall with two screws. Eufy says the battery should last for six months with average use, and there are power terminals on the rear of the device for connecting it to existing doorbell wiring to keep the battery at full charge.

The doorbell comes with a second unit called a HomeBase, which manages communication between the doorbell and your home network. The HomeBase also includes 16GB of local video storage space, meaning there’s no need for a cloud storage subscription. The hub requires a wired Ethernet connection, so it can’t be installed just anywhere, but you can tuck it out of sight since you don’t have to regularly access the device.

The Eufy Video Doorbell Dual provides a sharp, well balanced video image that looked good during the day and at night. In the Eufy app, you can pinch and zoom on different parts of the image to get a closer look, a feature that definitely benefits from the 2K video resolution. I didn’t have any problems with the video during my testing.

The doorbell was consistently triggered by movement at my front door, and it didn’t suffer from frequent false positives or get triggered too easily by wind or weather. Once or twice the camera triggered too late to catch action, but those were outlying cases.

The app offers a wealth of configuration options, some of which are quite clever. First are the basic detection settings. You can choose between all motion and humans only as well as select the sensitivity. There are user-definable activity zones for both cameras, plus an additional option to set alerts if someone loiters in front of your house. You can even determine what you consider to be loitering; for example, someone standing within 6 feet of the front door for 15 seconds or more could trigger an alert.

The app offers several ways to display both cameras. You can stack the two camera views so they’re identically sized, or put the package camera in a small window inside the main camera view. If you opt for this latter option, you’ll get a larger view from the main camera.

One of the smartest functions is the package detection. When the camera detects a package being placed on your porch, it will send an alert telling you something was delivered, and the camera will keep watch over that package. You’ll then get a second alert when you or someone else picks up the package up. The camera can also be programmed to play audio of your choice should someone approach a delivered package, and it will remind you if a package has gone uncollected.

The device includes a facial recognition feature, which is switched off on by default. If enabled, it will attempt to detect faces when people come to your door, and you can teach the doorbell the identity of each person, so it knows the difference between (say) a stranger and your neighbor.

The app allows you to share access to the camera or your entire Eufy home (should you have other Eufy security products) with other people.

The biggest downside to the doorbell is limited smart home support. If you’ve gone all-in with Alexa or Google Assistant, this doorbell won’t offer quite the same level of integration as Amazon’s Ring or Google’s Nest devices, although it can be controlled with some Alexa and Google Assistant voice commands. Meanwhile, Apple’s HomeKit platform isn’t supported at all.

Admittedly, I initially thought the Eufy Video Doorbell Dual’s downward-facing camera was merely a gimmick, but after testing the doorbell’s smart detection features, I found it really useful to get alerts when packages were picked up and delivered. The addition of the included HomeBase’s local video storage in the HomeBase makes the Dual an even more attractive package. If you’re in the market for a video doorbell, this is one you should take a look at.