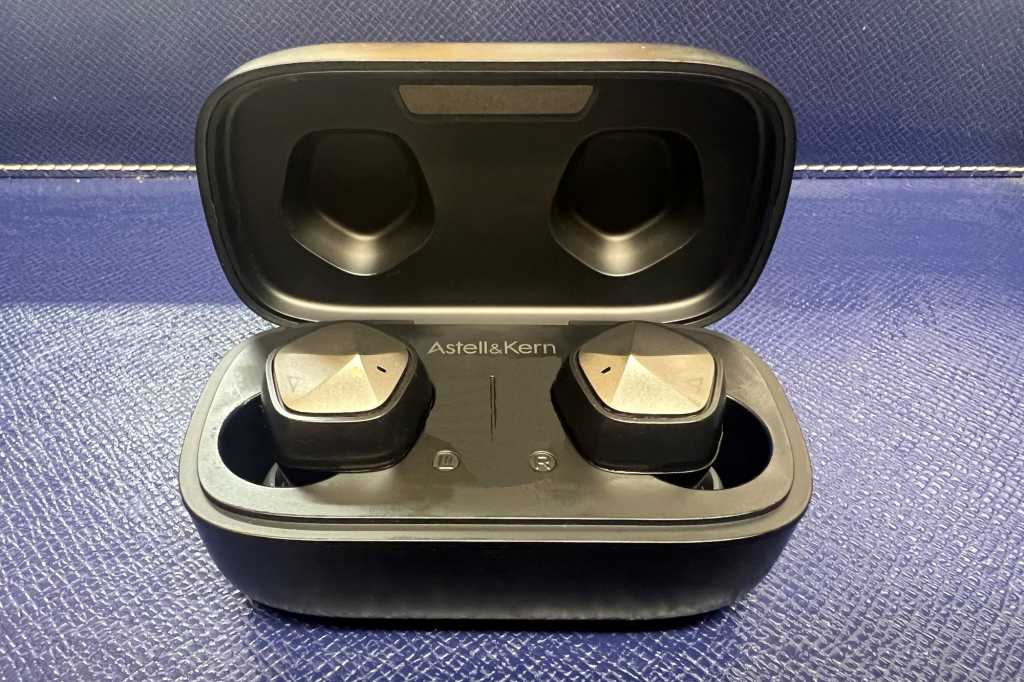 Astell&Kern has a well-earned reputation for building audiophile-grade high-res digital audio players. Now it has surprisingly affordable in-ear monitors worthy of pairing with that high-priced gear.

Astell&Kern has a sterling reputation in the audiophile world, so you have to think they carefully considered the decision before they put the A&K name on a pair of wireless in-ear headphones priced for a broader market. The AK UW100 utilize technology originally developed for the company’s hi-fi gear and certainly qualify as a product that deserves the Astell&Kern name.

Building high-quality in-ear headphones is quite the challenge. Sure, there are plenty of inexpensive earbuds that will keep a Bluetooth connection and there are also plenty of listeners who can’t tell the difference or don’t care.

When a manufacturer aspires to something better, they’re usually tripped up at the digital-to-analog converter (DAC) stage. Most choose low power consumption DACs to maximize battery life, but that trade-off severely limits the audio quality they can deliver.

Astell&Kern believes it has solved the problem by tapping amplifier and audio circuit technology originally developed for its digital audio players. The AK UW100 uses an Asahi Kasei AKM AK4332 32-bit DAC to deliver a much better audio experience than the competition.

Each earbud has a pentagon-shaped face with the speaker post protruding from the bottom of the earbud. They’re not small devices by any stretch, but they sit comfortably in the ear with the proper eartip. Users with very small ears may find them to be too bulky, but AK UW100 earphones offer a distinctive look that’s in line with the other gear that Astell&Kern manufactures.

Astell&Kern touts its passive noise isolation (PNI) as an improvement over the active noise cancellation (ANC) virtually every other noise-cancelling wireless headphone uses. The company says it’s better at blocking noise in the mid and high ranges, whereas ANC concentrates on low frequencies and ignores everything else.

In practice, PNI delivers an effective noise-blocking experience with none of the eardrum suck and music distortion common to even the most highly rated ANC earbuds and headphones. I didn’t hear outside noises, and the music sounded like there was no processing at all. This is a significant accomplishment. With these headphones, noise isolation is achieved physically, versus electronically, so there’s no on or off state. But when you do want to hear what’s happening around you, you can turn on one of four four levels of ambient sound.

I’ve found that headphones with touch controls can be irritatingly finicky and very hard to master. That’s not the case with the AK UW100—the touch controls here are better than any other headphone I’ve tested.

A&K’s engineers used the pentagon shape of the earbuds to develop a great solution. Five flat panels on the surface that meet in a raised point on the earbud. That point is the location a user taps to control the AK UW100 earphones.

A single tap on the left-hand earbud engages ambient listening mode and a single tap on the right is supposed to pause and restart play. You can also pause music by removing on of the earbuds from your ear. This seems like an obvious solution, but credit A&K for removing one of the most frustrating pain points for anyone who’s struggled with Bluetooth in-ear headphones.

Fully charged earbuds offer 6 hours of playback and up to 24 hours with a full charge to the case. That’s not as long as other popular earbuds, but it’s an impressive number when you consider how much better the AK UW100’s DAC is. In a pinch, a 10-minute charge will give you 1 hour of playback. The case charges with either a USB-C cable or wireless charging. The earbuds come with five sizes of ear tips.

You can pair the AK UW100 earphones to multiple devices at once and multipoint technology will allow you to watch a film on your tablet but seamlessly answer calls to your phone when both are connected to the earphones.

Astell&Kern has developed an AK TWS app that’s available from both the iOS and Google Play stores. The app gives an exact battery level for each earbud, allows you to engage and disengage the Ambient mode, and set its level. There’s also an equalizer and you can adjust the tap settings from within the app.

Aside from default mode, the in-app equalizer offers bass emphasis mode, high emphasis mode, vocal emphasis mode, and game mode. These earbuds are so perfectly tuned that I couldn’t really figure out a reason to use any of the other equalization settings.

The AK UW100 offer an impressive amount of bass in that the bass is always present but never over-emphasized. These will not suit anyone who’s still in love with the original Beats tuning, but they’re versatile enough to shine with almost every genre of music.

There’s an impressive amount of detail when turning to a wide variety of guitar music, such as Prince’s Originals album, Radiohead’s The Bends, Slayer’s Reign in Blood, or Angel Olsen’s My Woman. The designers have managed to hit a sweet spot that makes these a fantastic choice for anyone with broad taste in music or even someone who’s devoted to a single genre.

The Astell&Kern AK UW100 true wireless Bluetooth earphones are an impressive combination of technology and taste. The balanced armature drivers and high-quality DAC certainly contribute to the outstanding quality of these headphones, but it’s ultimately the ears of the people who tuned the AK UW100 that deserve the credit for making these such an exceptional choice. They are truly special.

You’ll be able to pre-order the Astell&Kern AK UW100 starting Monday, March 28. The earphones will be available for purchase from authorized A&K dealers on April 11.