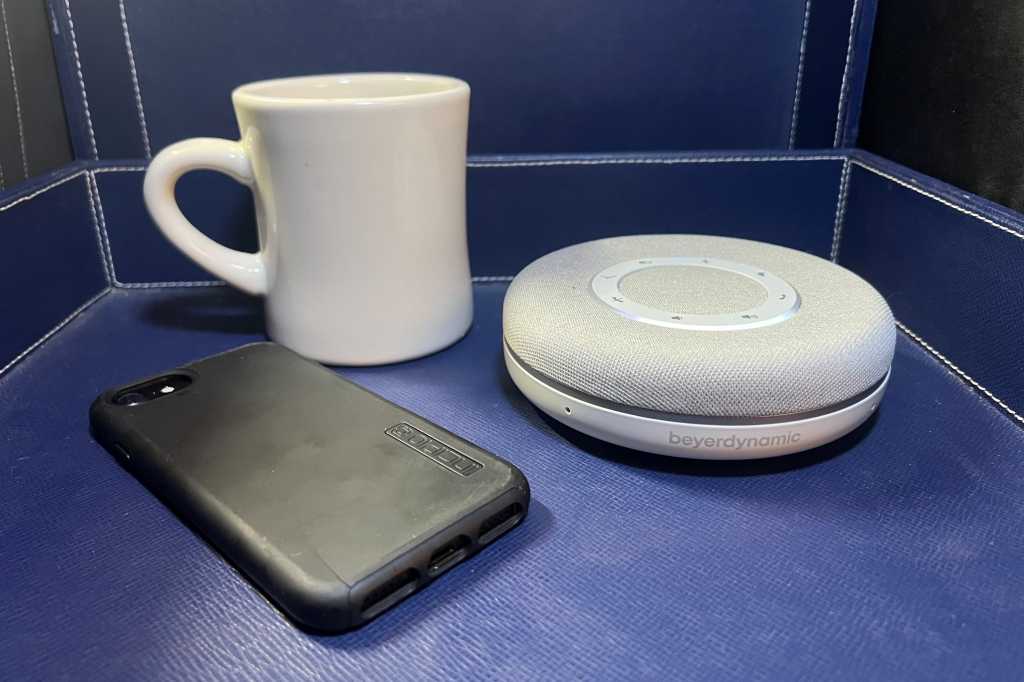 The Beyerdynamic Space justifies its price with outstanding industrial design and stellar call quality. Its good-but-not-great qualities as a music speaker don’t detract from the overall experience.

Beyerdynamic wants you to think of its new Space as a high-quality speaker that doubles as a speakerphone. The device lives up to that ambition and features a stylish design that will look great on your desk.

On startup, a voice tells you the battery percentage and announces if the speaker is pairing or connected. The Space can pair with two devices at the same time and never failed to reconnect with my phone and computer after powering on.

The Space is designed for personal use, so the volume ceiling isn’t as loud as other Bluetooth speakers in this price range. It also doesn’t support AAC or AptX streaming, so it’s also not making claims to be an audiophile speaker. The Space streams via Bluetooth 5.0 and supports the HFP and A2DP streaming profiles. Its 1.5-inch full-range speaker has two passive radiators and the speaker works with both Siri and Google Assistant.

Still, it makes an excellent desktop companion. There’s no distortion at max volume and Beyerdynamic has created a discrete music mode to maximize playback quality. There’s also a speakerphone mode and the device switched seamlessly between the two when taking a call.

Although I tested only a single speaker, Beyerdynamic says the Space supports True Wireless Stereo when paired with a second unit. When you consider the company’s heritage as a manufacturer of first-rate microphones and headphones, it seems likely that a pair of Space speakers will offer an attractive and excellent-sounding alternative to a regular Bluetooth speaker.

I normally use a variety of headphones or earbuds for phone calls at my desk, most commonly AirPods Pro. I tested the Space with a variety of people I call on a regular basis and got a unanimous verdict that my voice sounded much better than usual when using the speakerphone.

Virtually any modern Bluetooth speakerphone sounds better than the old-school conference room speakers that have plagued corporate meetings over the past few decades, but the Beyerdynamic Space is a cut above any other portable speakerphone I’ve used.

The speaker includes what Beyerdynamic call its 360-degree smart mic technology. Up to six people can simultaneously participate in a call using the Space. The speaker promises full-duplex audio, allowing callers to speak and be heard at the same time with no dropouts or vocal cutoff. That feature doesn’t work perfectly, but it works better than on any other speakerphone I’ve tried.

There are four MEMS (Micro-Electro-Mechanical Systems) microphones designed to automatically processes audio to reduce background noise and boost voices. I’ve used the Space with a space heater running in my office and it did a great job of reducing the fan noise on my calls.

My review unit was in “Nordic grey;” you can choose from two other colors: Charcoal or aquamarine. The device comes with drawstring bag to protect it during transport and a QuickStart guide.

The speaker measures 5.2 inches in diameter and 1.5-inches high and weighs just 0.75 lbs. A full charge takes 2.5 hours and promises 20 hours of use on a charge. If you’re out of power, a 10-minute charge will give another two hours of use.

The Space also has a color-coordinated USB-C cable and USB-C to USB-A adapter. That USB-A adapter is made to snap into place in an opening on the underside of the speaker, offering secure storage for a small part that can be easy to lose track of.

The Beyerdynamic Space is an excellent speakerphone that features a truly striking design, one that goes a long way towards justifying its price. It’s a genuinely beautiful object that recalls the best of mid-century modern design.

It’s quite good as a music speaker, even though it’s missing the ability to stream music at higher resolutions. If you’re looking for something on your desk to stream podcasts or news and enjoy a bit of music, the Space is a terrific option. If the stereo capability is as good as one would expect from Beyerdynamic, a pair of Space speakers should be a nice (if expensive) upgrade.

A big part of what’s on offer here is design and ease of use, both of which support the Beyerdynamic Space speaker’s premium price.