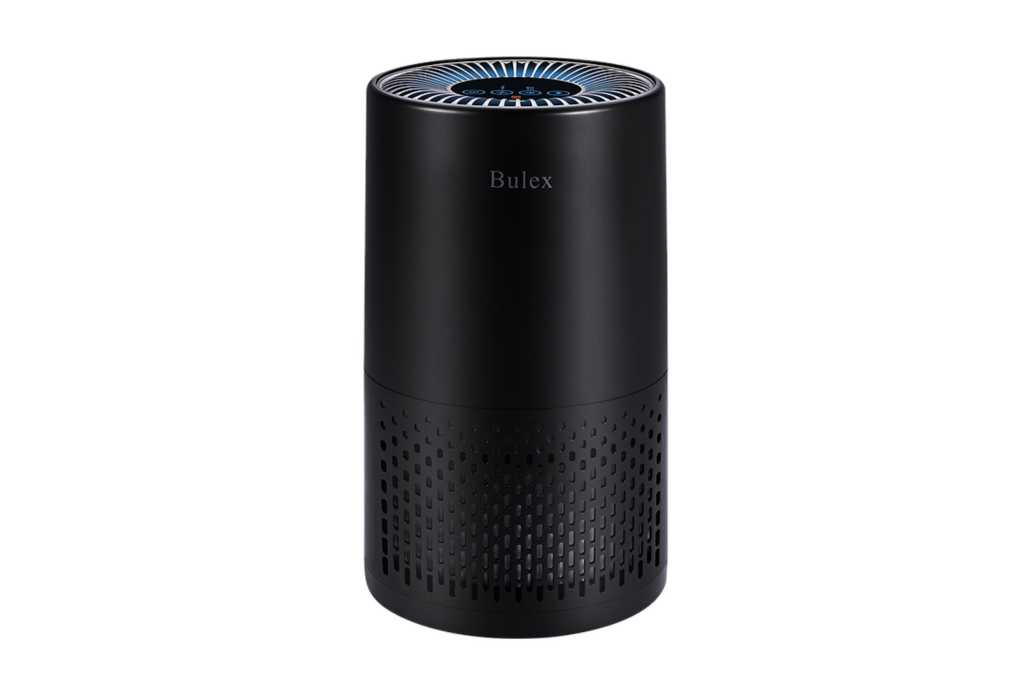 Image: Bulex
At a glance

The Bulex AF-3222’s size and price are right for personal use, but this purifier is so loud that it is virtually unusable.

You’ve might think you’ve seen the Bulex AF-3222 Tower True HEPA Air Purifier before–or, at least, a product or two that look an awful lot like it. Decidedly familiar in design, this 14-inch tall cylindrical purifier is designed for personal use in a small room, with a 220 square-foot coverage zone specified. The unit’s minimum CADR rating (or “Clear Air Delivery Rate”) of 80 cubic feet per minute is on the low side, but not inappropriate for a small space.

The simple device (it lacks any smart features) pulls air in through all sides of the base, filters it through a small, disc-shaped filter, and emits clean air up top. At 5.7 pounds, the AF-3222 is extremely portable and easy to place just about anywhere. The unit is available in either black or white, though stockouts of either color seem common, depending on where you shop.

The purifier’s filter is primarily a HEPA H13 system, but Bulex says it also includes an activated carbon filter for removing foul aromas as well as a “degerming filter” (the latter of which I’ve yet to fully comprehend). The filter is accessed by loosening a hatch on the base of the purifier, allowing it to be quickly popped out. Replacement filters cost just $30. A filter reset indicator lights up after 2,000 hours of operation; holding it down for 3 seconds resets it.

Controls are simple and intuitive. Aside from the power button, you get a speed setting button that cycles through four modes, including a sleep mode, while a timer button lets you cycle through 2, 4, or 8 hours before shutting the unit off. There’s also a night light button that activates a pale “lagoon blue” glow (created by a trio of “color experts,” according to Bulex) from inside the device. Note that whether the nightlight is on or off, the backlit buttons remain constantly lit and can’t be disabled, making the AF-3222 a difficult fit for nighttime use.

I loved everything about the AF-3222–until I turned it on. Upon firing it up to its initial level-1 speed setting, a magnificent rumbling began echoing throughout the room. The ratting sounded like a ball bearing had escaped from inside the fan housing, or the fan was knocking against something, like a playing card in the spokes of a bicycle wheel. Even on its lowest speed, the unit was too loud to concentrate while it was nearby.

I tried removing and replacing the filter (which is about all you can do when troubleshooting an air purifier) several times. Eventually the ratting stopped, only to be slowly replaced by a rhythmic whirring that grew increasingly persistent over time, as if the motor was off balance, causing it to make a kind of oscillating sound. After a few more minutes, a scratchy grating sound was invariably added to the mix.

All this noise was on the lowest speed setting, mind you. Cranking things up to max made it sound like there was a dirt bike rally in the room. Even on sleep mode, the AF-3222 was untenably noisy, akin to a small car idling one room over.

Ultimately, the Bulex AF-3222 is so deafening that it’s hard to imagine any environment where it might be appropriate, save for an auto body shop. Too bad you can’t activate that nifty nightlight without also turning on the fan.