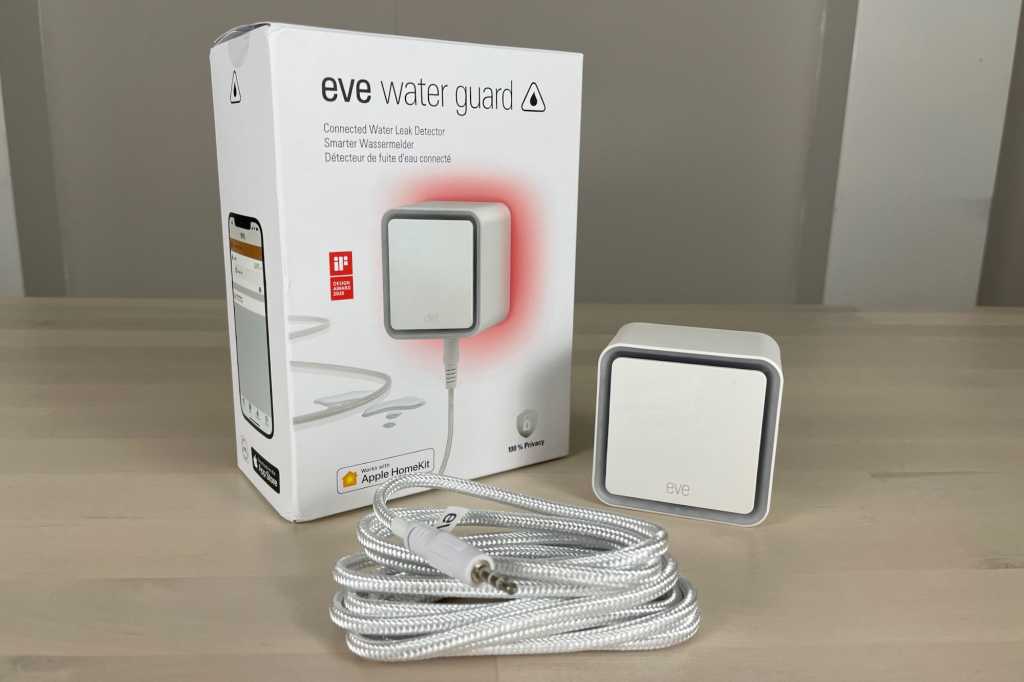 If you’re in the market for a Thread-enabled water leak detector that works with HomeKit, the second-gen Eve Water Guard is your best–and only–option. This updated version adds a Thread radio to the Water Guard’s bag of tricks while retaining the same design, including a power adapter with a built-in siren and LED warning light, along with a plug-in sensor cable that detects moisture where it shouldn’t be.

Eve Water Guard does what it does well, but you’ll have to decide for yourself if it fits your particular needs. With its wired design and lengthy sensor cable (you can stretch it to nearly 500 feet if you buy enough extensions), the Water Guard could provide reliable leak detection over a wide area of your home, provided you’re willing and able to snake the cable across floors, inside cabinets, and under potentially leaky appliances. But if you want to detect moisture in hard-to-reach places, you might be better off with a traditional leak detector with wireless sensors.

Another factor to consider is that while the HomeKit-enabled Eve Water Guard fits nicely in Apple’s smart ecosystem, it’s a non-starter for Android users; it doesn’t work with Alexa or Google Assistant, either.

Finally, the $99 Water Guard is more than double the price of our top pick, the Phyn Smart Water Sensor.

This review is part of TechHive’s coverage of the best water leak detectors, where you’ll find reviews of the competition’s offerings, plus a buyer’s guide to the features you should consider when shopping for this type of product.

Measuring 2.6 x 2.6 x 1.8 inches (HxWxD), the main Eve Water Guard module is a compact as far as smart home gear goes, but it’s also a wall wart, and on those terms it’s fairly chunky and guaranteed to block nearby outlets. On the back of the Water Guard is a circular slot for attaching a plug that’s compatible with the outlets in various regions; adapters for Australia (type I), Europe (type E and F), the U.K. (type G), and the U.S. and Canada (type A and B respectively) are included.

Also in the box is the 6.5-inch sensor cable, which is protected by a water-absorbent woven-fabric jacket. One end of the cable has a 3.5mm plug that snaps into the main Water Guard module, while the other end has a female 3.5mm port for attaching an extension. You can daisy-chain the 6.5-foot extensions (which cost about $20 each) together all the way up to an impressive 490 feet.

The physical setup process for Eve Water Guard is pretty simple: Just plug the main unit into a power outlet, plug in the sensor cable, then run the cable in the area where you’re worries about water leaks–say, under a washing machine, along a basement floor (I strung my sensor on the floor in my basement office, where we’ve had frequent leaks after strong summer thunderstorms), or beneath a sink. If you spring for one or more extensions, just daisy-chain them to the end of the first cable.

The Eve Water Guard is different from competing water leak detectors in that its sensor is physically connected to the main unit, while other detectors use wireless sensors that (generally speaking) connect to a hub. The beauty of wireless sensors is that they’re easy to place in spots that aren’t necessarily in reach of a power outlet, such as inside a bathroom vanity.

Of course, wireless water leak sensors have their downsides, starting with the fact that their batteries will eventually run out. The Eve Water Guard, on the other hand, uses wired power, meaning you’ll never need to worry about replacing batteries. And while wireless sensors can be placed in hard-to-reach spaces, Eve argues that the Water Guard’s sensor cable is better for “wide-area” monitoring rather than just “spot protection,” and that you can snake the cable all around your home if you add enough extensions (although at $20 a pop, those extensions will add up).

In any event, you’ll need to think about your use case before springing for any type of water leak detector. If you’re mostly worried about “spot” water leaks under sinks, you might be better off with a wireless model. But for those of us with leaky basement floors, a lengthy sensor cable like the Water Guard offers could be a better option.

The second-gen Eve Water Guard is a HomeKit device, which is great news for iPhone and iPad users invested in the smallish but growing HomeKit ecosystem. The bad news is that the Water Guard (like other Eve smart products) isn’t compatible with Alexa or Google Assistant, nor will it work with Android. In other words, the Eve Water Guard is all about Apple, for better or worse. 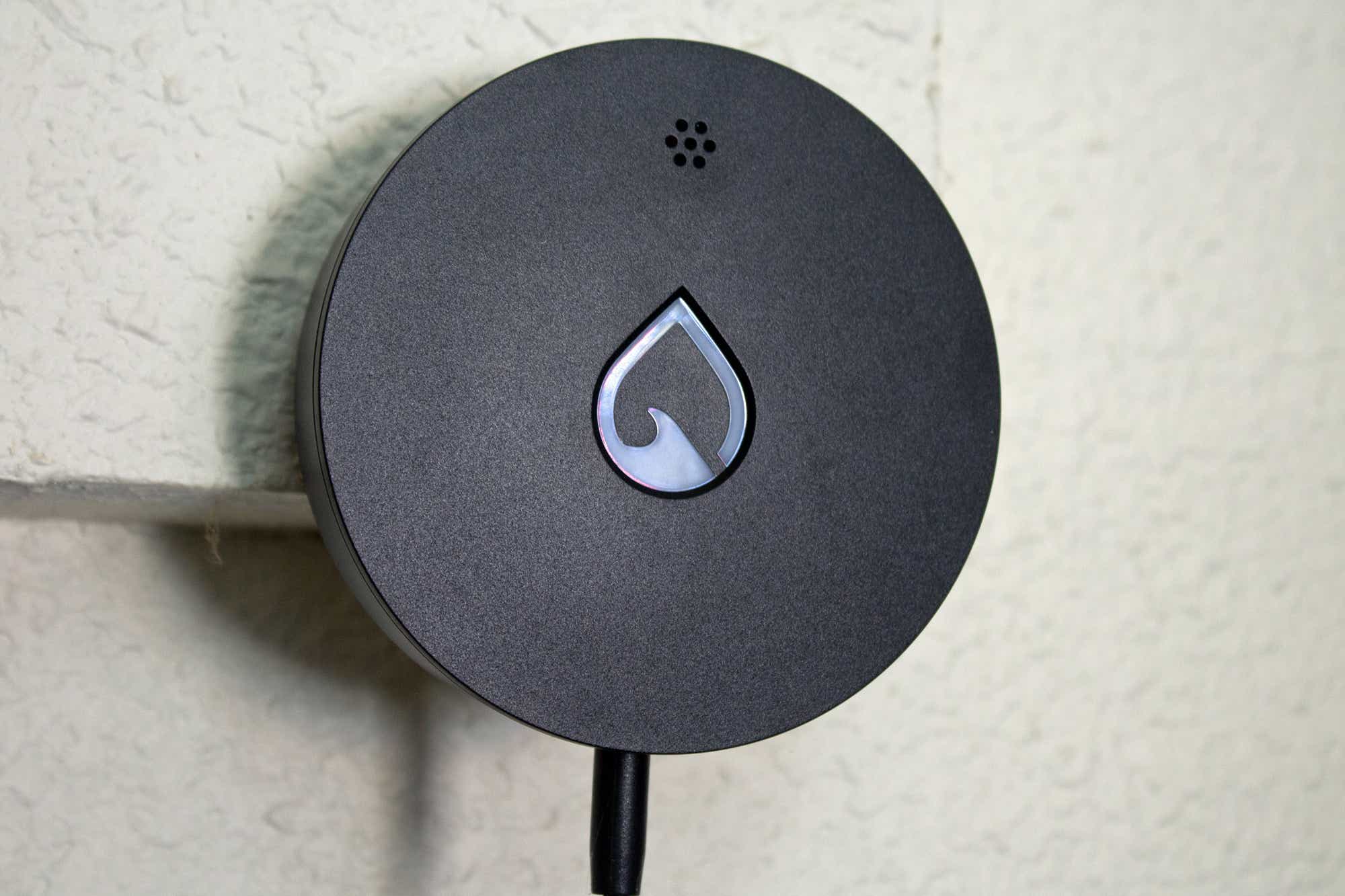 Now, the Eve Water Guard will work just fine over Bluetooth, but the latest version gives you a new connectivity option: Thread, an IP-based, low-power wireless protocol that’s slowly gaining popularity (and it’s also a pillar of Matter, a potentially unifying smart home standard that is supposed to arrive later this year). Because it uses wired power, the Water Guard can act as a Thread router, which means it can help to connect other nearby Thread devices (such as Eve’s own Energy smart plug and Door & Window sensor) to each other, thus strengthening your local Thread network. But to connect to the internet, the Eve Water Guard needs help from a Thread border router, and that means two specific home hub devices: a HomePod mini (not the older, full-size HomePod) or a second-gen Apple TV 4K (neither the first-gen Apple TV 4K nor the standard Apple TV will do).

Whether you end up using Bluetooth or Thread with the Water Guard, the HomeKit setup process is the same: You simply open the Apple Home app, then use your device’s camera to scan the HomeKit configuration icon stamped on the back of the unit. Once you add the Water Guard to a room within the Home app, it’s ready to go.

On the most basic level, the Eve Water Guard works by detecting moisture on the sensor cable. If it does, the Water Guard unit emits a piercing 100db alarm, and an integrated red LED will flash. The Water Guard will also trigger a notification on your iPhone, iPad, or Mac via the Home app.

Besides the Home app, there’s also the Eve app, which (like Home) lists all your connected HomeKit apps in their various rooms. From the Eve app, you can silence the Water Leak’s siren before you go hunting for leaks. The app also lets you view a history of events related to the sensor, such as when leaks were detected, when tests were performed, and whether the cable ever became loose or disconnected. But while the app will let you mute the Water Guard’s alarm once it’s sounded, you can’t disable the alarm altogether, nor can you change the volume level or the behavior of the LED indicator.

The Eve app also lets you test the Water Guard, which you can do by dipping its sensor cable in a bowl of water; in testing mode, the Water Guard’s siren will be (thankfully) much softer. Eve recommends testing the sensor cable once every three months, and the Eve app will let you set reminders for doing so (with the frequency ranging from once every 30 days to once a year).

If you’re feeling ambitious, you can add the Eve Water Guard to automations, allowing alerts from the unit (either from a leak or an aforementioned loose or disconnected sensor cable) to trigger HomeKit scenes. One example given by Eve is using an automation to cut the power to an Eve Energy-connected washing machine if the Water Guard’s sensor cable detects a leak under the appliance. Another option would be to make the HomeKit-enabled lights in a room change color if Water Guard detects moisture, or if the cable jack slips out of the unit.

Luckily, there were no actual water leaks in my basement during the time I was testing the Eve Water Guard, but the sensor cable spread across the floor did an excellent job at sniffing out water.

Spilling a small pool of water on the floor, the sensor cable quickly soaked it up, and within seconds, the Water Guard’s alarm was blaring (the siren beeps about once a second, and yes, it’s loud) and its red LED began to flash. The Water Guard also triggered a HomeKit alert on both my iPhone and iPad, just as advertised.

Like I mentioned at the top, the Eve Water Guard does what it does well, but you’ll have to decide for yourself whether it lines up with your needs. In my case, I like the idea of a wired cable that watches over a swath of my basement floor, where leaking (and sometimes even flooding) is a frequent and upsetting problem. But if I was only worried about moisture under a sink where a power outlet was less accessible, I’d probably prefer a wireless leak sensor.

And then there’s the compatibility issue–namely, no Android, Alexa, or Google Assistant support, or at least not until Matter (a potentially unifying but delayed smart home standard) comes around.