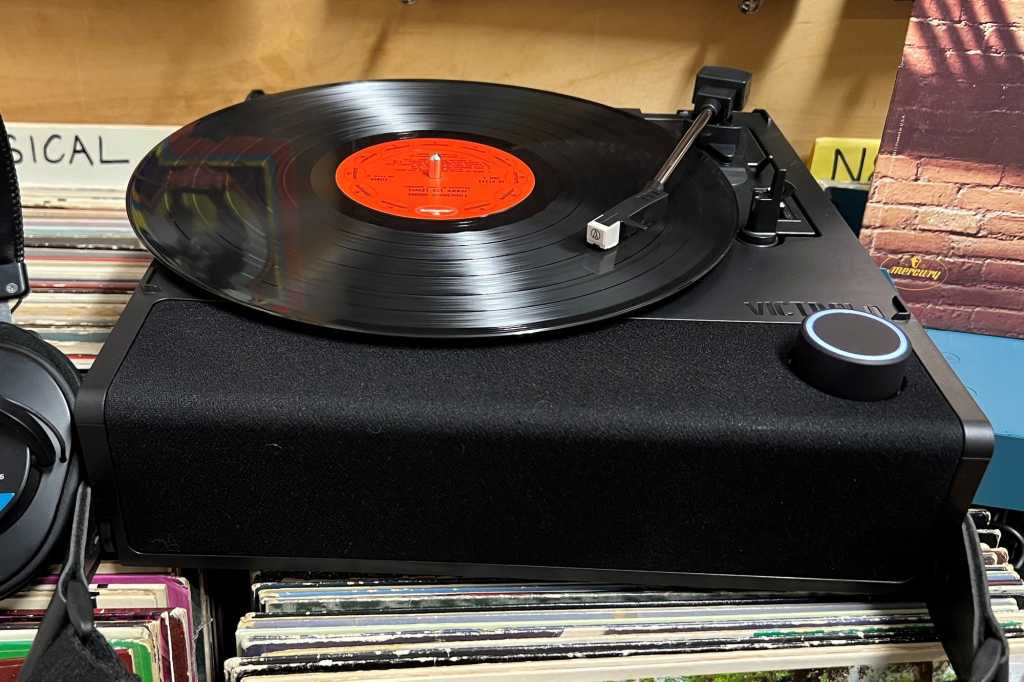 This portable device is just the ticket for crate-diggers; it would also be a great inexpensive first turntable for new vinyl listeners.

Being a music fan is supposed to be fun, and listeners of a certain age almost all have fond memories of their first portable record player. Back in the 1960s and 70s, compact turntables with built-in speakers were usually a kid’s first playback device that allowed them to choose when to listen to their own music.

Cassette tapes replaced the record player before portable CD players came along and took over. MP3 players and the iPod were next, setting the stage for our current streaming era.

Victrola is a modern company that has revived the name of the most famous first-generation manufacturer of devices that played music on a circular flat disk. They’ve made a name for themselves with turntables and record players aimed at listeners who are just getting started with vinyl.

What attracted me to the Revolution Go was its potential as a tool for record collectors and crate diggers. If you’re at a record fair or a thrift shop, it’s hard to know sometimes just how clean a used record might play. There’s also the question of whether you need to take a chance on all 25 of those LPs you’ve never seen before.

There are dozens of relatively inexpensive, suitcase-style record players on the market, but very few are battery-powered, and I haven’t found another that has both a battery and a headphone jack. It’s that combo that made the Revolution Go the perfect tool for a record-buying expedition.

The Revolution Go is a three-speed turntable that plays 33, 45, and even 78rpm records. The entry-level Audio Technica AT-3600LA cartridge is good enough to let you hear the surface noise on a potential purchase without doing any damage to the record.

The player weighs a manageable 6.8 pounds and measures 4.8 x 12.8 x 13 inches (HxWxD). That’s heavier and bigger than most suitcase players, but you’re getting an internal lithium-ion battery and a lot more going on with the internal electronics than most other players.

The Revolution Go comes with a guitar-style strap for carrying over your shoulder if you prefer that to the flip-out carrying handle. The included power adapter tucks neatly behind a storage door on the bottom of the Go, giving you an easy backup if the player’s 12 hours of battery power runs out while you’re in the field.

Victrola currently selling the player in either blue (as pictured here) or black. They have plans to introduce six new colors (citrus, green, pink, yellow, light blue, and slate) later this year. The lid of the case is removeable and designed as a stand that can store up to five LPs while the player is in use.

There are RCA line-out jacks on the back of the player, so you can use the Revolution Go as a turntable with powered speakers or plug it into a receiver. The headphone jack offers excellent audio quality.

One two-second push on the volume knob turns on the player and activates playback through the internal speaker. If you’re using the built-in speaker, it’s nice to report that you get reasonably good stereo sound. That speaker might not be the Revolution Go’s best feature, but it’s significantly better sound than what you’re going to get from most of its competition in the suitcase player category. 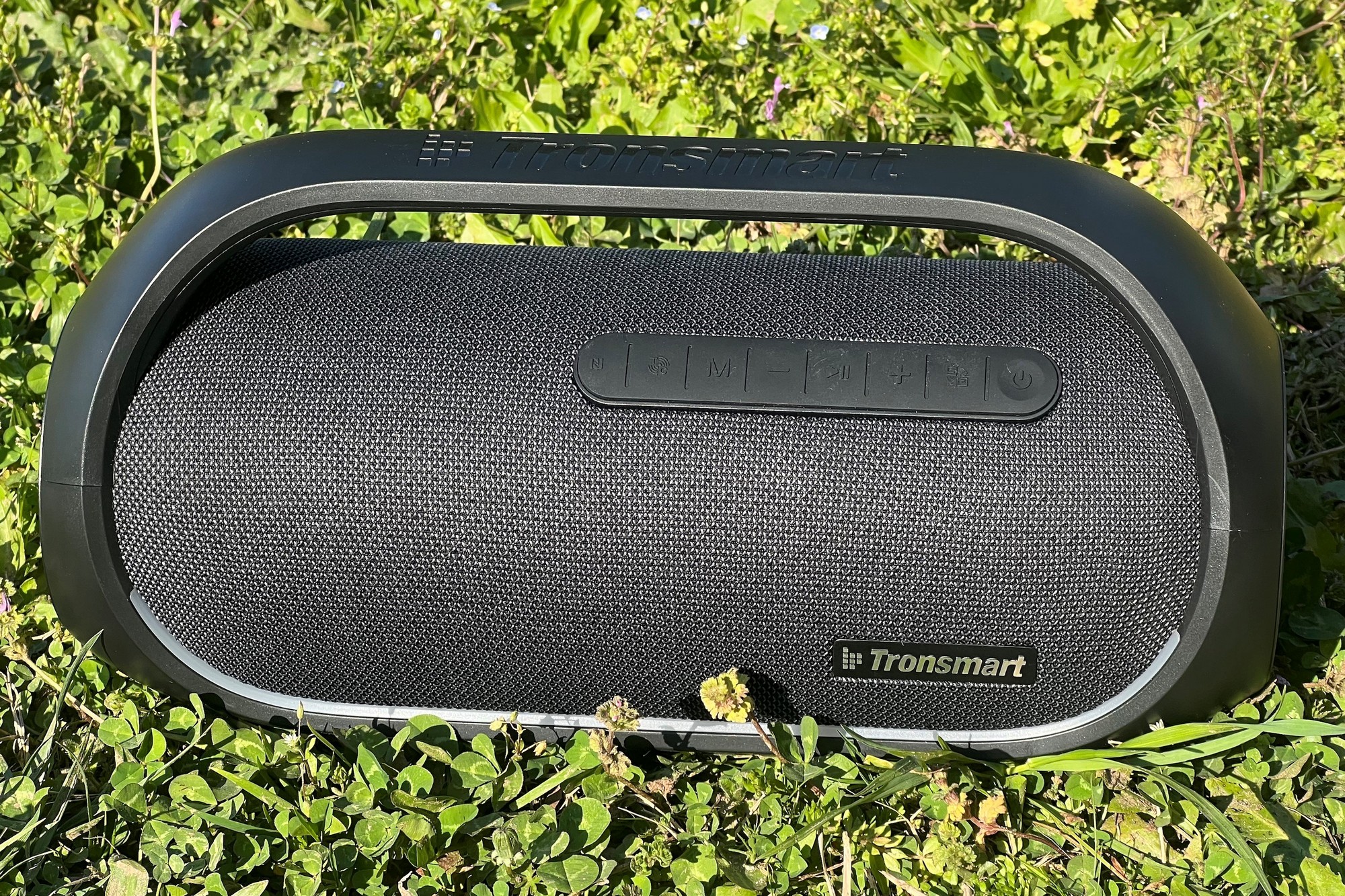 A second push on the volume knob switches playback to the Vinyl Stream setting. That Bluetooth streaming option offers a chance for a serious upgrade. The Revolution Go hunts for a Bluetooth speaker in pairing mode and, once it connects, your vinyl playback comes through that paired speaker.

While researching this review, I spent a lot of time using the Revolution Go with the Tronsmart Bang party speaker, a mid-priced outdoor speaker with excellent stereo separation. It sounded great and the two devices stayed paired when they were 30 feet apart.

I also tested it with a Mass Fidelity Relay Bluetooth receiver connected to my home stereo system. Taking into the consideration the good-not-great quality of the cartridge, the Revolution Go performed remarkably well.

A third push of the volume knob turns this record player into a Bluetooth receiver. You still get that true stereo separation and reasonably good audio quality. Considering that it’s a bonus feature on a device primarily designed to play vinyl, it’s a nice addition to the package.

There’s a lever to lift and lower the tonearm, because it’s never too early for a new vinyl listener to learn best practices when it comes to record playback. You get a clear plastic needle guard to protect the cartridge during transport and a standard tonearm lock clip. There’s also an adapter for 7-inch 45rpm records with a large hole.

Should you buy a Revolution Go?

At $200, the Revolution Go costs quite a bit more than most suitcase players, but it has features that justify its price. You get a better cartridge, a built-in battery. and the ability to use this record player with a first-rate Bluetooth speaker.

If you’re looking to buy a record player for someone who’s just learning about vinyl, the Revolution Go is an excellent choice. It’s easy to use, its needle won’t destroy their expensive new Record Store Day pressings, and they can use the player’s Bluetooth receiver to play music from a phone.

The Revolution Go should be even more exciting for record collectors. Faced with a huge stack of mystery vinyl at an out-of-the-way thrift store, the player and a pair of headphones can quickly help a crate-digger figure out whether they’ve found a rare vein of jewels or a pile of junk without alienating everyone else in the store.