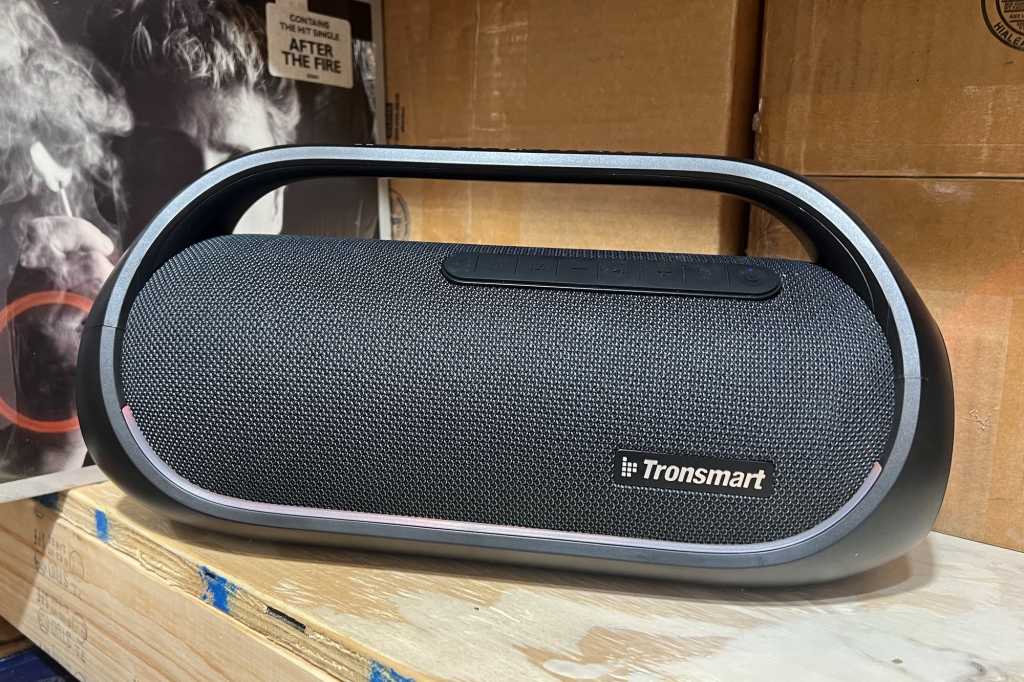 The Tronsmart Bang party speaker packs a lot of punch for a speaker its size, pumping out 60 watts of true stereo from a rugged, waterproof case. The Bang gets mighty loud without distorting, making it a great choice for outdoor parties.

This Bluetooth 5.0 speaker has some heft, weighing almost 7 lbs. and measuring 14.2 x 7.2 x 5.9 inches (WxHxD). Its IPX6 water resistance rating means it can easily survive splashed water but not necessarily a drop in the pool. You can learn all about IP codes by clicking the preceding link.

Tronsmart has an excellent logo that looks like it was designed for a Silicon Valley startup in the early 1980s. There’s a badge on the front that has the name and logo in a silver finish. These are also stamped into the top of the handle. For those old enough to remember the days before computer-aided design, the Tronsmart logo might remind you of the days when companies used Letraset transfer lettering to brand themselves.

The throwback vibe extends to the speaker itself, which adds a flat bottom and arched handle to a cigar-shaped speaker housing. The cylinder itself is covered with a cloth grille that at first suggests that the Bang is a 360-degree mono Bluetooth speaker. That’s not the case here, though, as Tronsmart has designed a true stereo speaker and half of that cloth covering is for looks.

The result is a speaker that wouldn’t look out of place displayed next to early personal computers, office machines, cassette players or boom boxes from the 80s. That design won’t work for everyone, but the Bang’s retro vibe holds a definite charm for me.

The Tronsmart Bang has two tweeters, two woofers and a passive radiator on each end. While all of those drivers are crammed into a relatively small package, the Bang offers remarkable stereo separation for a portable speaker this size.

A listener usually needs to invest in a much larger speaker or two Bluetooth speakers that pair in True Wireless Stereo mode to get anything but mono. The Bang’s stereo imaging is really good.

I streamed Enoch Light & the Light Brigade’s 1969 psychedelic easy-listening LP Spaced Out as a stereo test. The LP was recorded with exaggerated stereo separation, so that audiophiles could show off their hi-fi gear while enjoying some distorted guitars with their instrumental dinner music. Enoch’s version of the Beatles’ “Ob-La-Di, Ob-La-Da” has some of the most extreme stereo effects ever committed to tape and the Tronsmart Bang easily keeps up with the left-to-right (and right-to-left) movement of the sounds.

There’s a strip of controls across the front of the speaker. If your device offers NFC pairing, you can tap the NFC logo for instant connection. There are three LEDs that display the level of battery charge.

An M (mode) button on the front strip allows you to switch input modes. If you press it for two full seconds, you’ll activate your paired devices voice assistant. There are volume-up and -down buttons that also skip forward and back one track when pressed twice in succession. The Play/Pause button can also be used to answer calls or disconnect from Bluetooth (with a 3-second press).

The power button on the right-hand side can also switch lighting modes with a single press. There’s a button to activate Tronsmart’s bass-boosting SoundPulse EQ settings and a light that displays when that EQ is engaged.

The TuneConn button makes it easy to engage Tronsmart’s Broadcast mode that allows you to share the music with up to 100 Tronsmart speakers at once. You’ll clone the sound to a second speaker, since the Bang doesn’t offer TWS (True Wireless Stereo). However, since the stereo imaging from the Bang is so good, that feature isn’t really necessary for this model.

A thick rubber cover on the back of the speaker protects a series of inputs. There’s a pinhole you can use to reset the Bang to factory settings. There’s a USB port that allows a user to charge a mobile device from the Bang’s battery. Users can also plug in a USB drive loaded with music and use that as a playback source.

Finally, can use a 3.5mm aux input or a TF slot that takes a microSD card as an alternate audio source. (TF is an acronym for TransFlash, the old-school name for microSD flash memory storage.) There’s a USB-C input to use for charging. The Bang comes with a USB-C chagrining cable and a 3.5mm audio cable.

Tronsmart has developed an app for iOS and Android that allows the user to control both the speaker’s light and EQ settings. In addition to the Sound Pulse EQ setting that’s accessible from the on-device control panel, Tronsmart has created Deep Bass, 3D, Hi-Fi, Classical, Vocal and Rock EQ profiles. There’s no custom tweaking of settings, so you’re limited to the eight created by Tronsmart.

It’s easy to hear the difference between each profile, but I personally found the standard profile and Sound Pulse options to be the only two I’d ever choose. The Bang is a not a speaker designed for careful acoustic or classical listening, so the quieter EQ profiles don’t do much to improve the sound of those genres of music.

The app also lets you switch between the Bang’s four play modes: Bluetooth, Aux, TF-Card, U Disk. TF-Card is the microSD card input and U Disk is for the USB drive input. You can also activate broadcast if you’re looking to add more Tronsmart speakers to your setup.

You can control the color of the LED lights and their display mode, choosing solid, vary with beats, or off. Finally, there’s a button in the app that allows you to power off the speaker and disconnect it from the phone source. It’s a simple thing that proves useful in practice. The ability to power down from across the room seems like an option that every Bluetooth device should have once you’ve had a chance to use it.

Battery life is good but not great. The 10800mah battery takes about 4.5 hours to fully charge via a USB-C port and offers around 8 hours of playback with the light show turned on. You can squeeze a few more hours out of a charge if you turn off the lights. Using a USB drive or a microSD card as your music choice instead of Bluetooth will also extend your battery life.

The Tronsmart Bang is a good value

There are quite a few reasonably priced speakers designed to pump out the volume in a party environment, but the prices usually go way up when you’re asking for stereo imaging to go along with the loudness. The Tronsmart Bang delivers on both fronts.

I spent a day with the Bang on a construction project at an LP storage warehouse, both sorting music indoors and building shelves outdoors. The speaker was a gift, loud enough to be heard over all the pounding and hammering, and the stereo imaging held up no matter the distance or how many shelves of records blocked the audio path. If you want something that’s not too large but still a step up from the standard outdoor Bluetooth speaker, the Tronsmart Bang is worth a look.