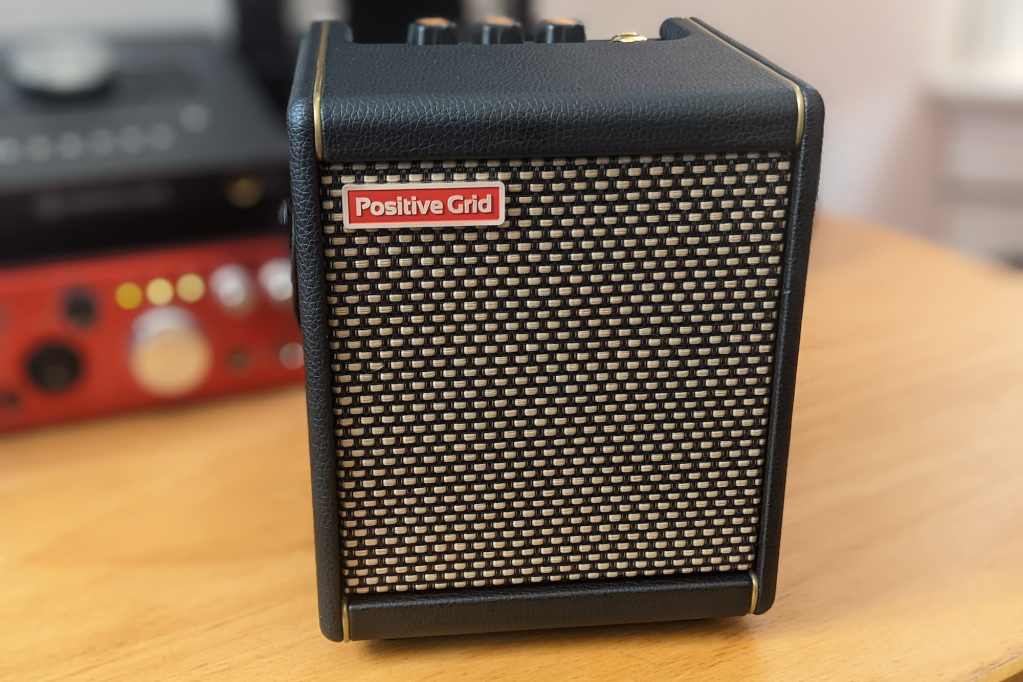 The stylish, compact, and great-sounding Spark Mini may be pricey, but it also doubles as an uber-portable practice amp.

Guitar amp vendors are known for selling the best-sounding consumer audio devices, and given the target audience–musicians–I suppose that shouldn’t come as a surprise. Marshall and Fender, for example, both deliver the sonic goods, and now comes Positive Grid with its fantastically portable, yet beefy sounding Spark Mini Bluetooth speaker.

The $229 (retail) Spark Mini is a great sounding little speaker considering its diminutive proportions, which do impose some sonic limitations. It’s also a stellar, super-portable practice amp for guitar and bass players if you happen to know one. (The latter functionality is still pre-release.)

Originally a software company, Positive Grid created waves two years ago with its first hardware product, the Spark practice amp. It was small by amp standards, but large for a Bluetooth speaker, and it lacked a battery for true portability.

Enter the Spark Mini, which at 5.76 x 4.84 x 6.49 inches (WxDxH) is considerably smaller than the original Spark amp, and therefore closer to the size that the average consumer (or touring/vacationing musician ) is looking for.

Of course, the 3-pound (including a 3000 mAh/8-hour battery) Spark Mini doesn’t quite disappear in a backpack. But it’s a heck of a lot easier to carry around than many speakers, not to mention any practice amp worth its salt. The removable strap (shown above), which is quite reminiscent of a guitar strap, makes the smaller Spark easy tote on its own.

The Spark Mini comes wrapped in black or pearl Tolex (a textured vinyl used on many amplifiers) with either a brown grill, or an optional red one. The speaker is styled like a real guitar amp, which in point of fact it is.

Inside the Mini are dual 2-inch full-range speakers angled 8 degrees to each side, plus a passive radiator on the bottom. The Class D amp delivers 10 watts total, or 5 watts per speaker.

The only control on top of the Spark Mini that will interest non-musicians is the rotary Music knob. It controls the volume of music arriving via Bluetooth or the 3.5mm stereo auxiliary connector on the back of the unit.

A second knob controls the volume of the guitar signal delivered via the 1/4-inch phone plug jack, while the third determines which of the four presets–rhythm, lead, solo or custom (clean/crunch/lead on most amps)–is being used by the guitar amp section.

These presets only affect the guitar/bass signal, not normal Bluetooth playback. The guitar and music can be mixed together.

Besides the 3.5mm auxiliary input, other rear inputs and controls include the power button, a Bluetooth pair button, a USB-C connector (for the computer audio interface and charging), and a 3.5mm headphone jack/line level output.

While there’s a Spark app that controls the practice amp functions, there’s no EQ function for the Mini as a pure Bluetooth speaker at this time. It’s promised for the official release, though to be perfectly honest, the speaker doesn’t really need one.

Sound as a portable speaker

In terms of frequency reproduction, the Spark Mini is exceptional. The thump (bass) is definitely there, albeit slightly compressed sounding, but the amount of sub-bass the Mini produced was a pleasant surprise. The porting and down-firing passive radiator do the job. It won’t rattle your trunk, but it gets the point across.

The high-end was well-represented, and the mid-range nicely defined, though it became a tad more strident as volume increased. Speaking of which, the Mini can get plenty loud–louder than is comfortable when you’re near it.

In the end, my only complaint is that despite the angled speakers, there’s only a bare minimum of stereo separation. That’s endemic to single-box units with forward-firing speakers and no side-firing radiators. In other words, it’s the nature of the beast. There are plenty of similar speakers that don’t do as well as the Spark Mini.

Minimal stereo separation aside, If you’re looking for a cool-looking, conversation-starting Bluetooth speaker that sounds good, the Spark Mini is quite possibly what you’re looking for. At $229 (but currently on sale for $189), it’s pricey to employ solely in that role, but not outrageous if you look at the competition. And if there’s a hint of musical talent in anyone you know, the next bit makes it a steal.

The Spark Mini delivers far beyond what you might expect as a practice amp, especially given its diminutive stature. Sitting on a night table in a bedroom or hotel room, and at low volumes, it’s nigh on perfect. Crank it up, and well, it’s good, but size does matter. Think Stonehenge and Spinal Tap. (I kid.)

As I mentioned earlier, Positive Grid began as a software company–specifically, it started out as a guitar amplifier simulation, a.k.a. modeling, software vendor. Its first software products were the much-hyped Bias FX and Bias Amp, which are available for Windows, macOS, iOS, and Android. In truth, the Spark series are simply the same software simulations in a box containing a processor, amp, and speakers.

The same arrangement is found in any number of practice/small gig amps out there, including the Marshall CODE, Boss Katana, Yamaha THR10, and the Fender Mustang GT. The best thing about the modeling approach is that you can have the same amplifier emulate any number of others: clean Fenders, crunchy Voxs, distorted Marshalls, metal Mesas, and so on. In total, the Mini can mimic 33 different guitar/bass amp types (heads and speakers are married), and 43 effects.

Along with playing back through the speakers, the Mini can also output a line level signal (see below) from the line/headphone jack, or via USB as an audio interface (44.1 kHz/16-bit). There’s also an $109 optional Bluetooth Spark Control floor unit that allows you to tap switches with your foot to change presets or effects. It too is configurable via the Spark app.

The app allows you to create your own custom amp setups, save them online, and assign them to the four presets on the amp. You can also peruse and download presets from Positive Grid as well as other users. For new players, there are play-along and educational features, as well as in-app purchases for more amp models. An “Experience Jimi Hendrix” expansion pack, for example, sells for $20.

The Spark Mini offers up some great sounds, though I wasn’t in love with the stock presets. Tastes vary. Once I’d dialed my own in, I was extremely happy with what emanated from the speakers and headphones.

I must also say that I felt more comfortable playing through the Spark than many modeling amps. Response seemed silkier somehow. I don’t know whether it’s due to reduced latency (the time it takes to process the input signal and output the result), or some other factor, but it felt real enough to report it.

Alas, I ran into two recording issues, though hopefully they will be sorted out by the time you read this. I like to dial in my tone when listening through my recording software and high-end studio monitors. You can’t connect with the Spark app when you’re using the USB interface, so I used the line level output into my audio interface.

July 11th 2022: The issue just described seems to effect only Android users such as myself. According to Positive Grid’s forum users, the iOS version can connect via Bluetooth and USB at the same time, albeit only to edit sounds. There are separate Bluetooth tone control and audio connections.

Said line output from the guitar signal (not Bluetooth or auxiliary input) was extremely low (-28 dB with output and inputs cranked to the max), and I could find no adjustment for it. The other issue was occasional digital garbage from the USB audio interface. The app also had a tendency to disconnect while the Bluetooth was still paired.

Positive Grid promised a firmware update to fix the USB issues, but I hadn’t heard about a resolution for the low guitar signal output issue as of this writing. I’ve seen neither of these glitches reported on the larger Spark. I’ll revisit the review when there’s news from the company.

Issues or no, the Spark Mini is already a great practice amp and Bluetooth speaker. Hopefully a firmware fix will make it a great recording amp as well.

On July 18th 2022, Positive Grid released the v1.8.2.19 firmware which finally produces enough volume through the line level output to make it usable for recording. It’s still only approximately -12 dB on the meters, so there’s not a lot of headroom, but it’s now workable.

As of June 10th, 2022, despite a firmware update, the Spark’s line level output of guitar signals remains extremely weak. It may be an early production hardware issue with no firmware fix. There’s been no fix for the Andoid app’s inability to connect via Bluetooth and USB simultaneously either.