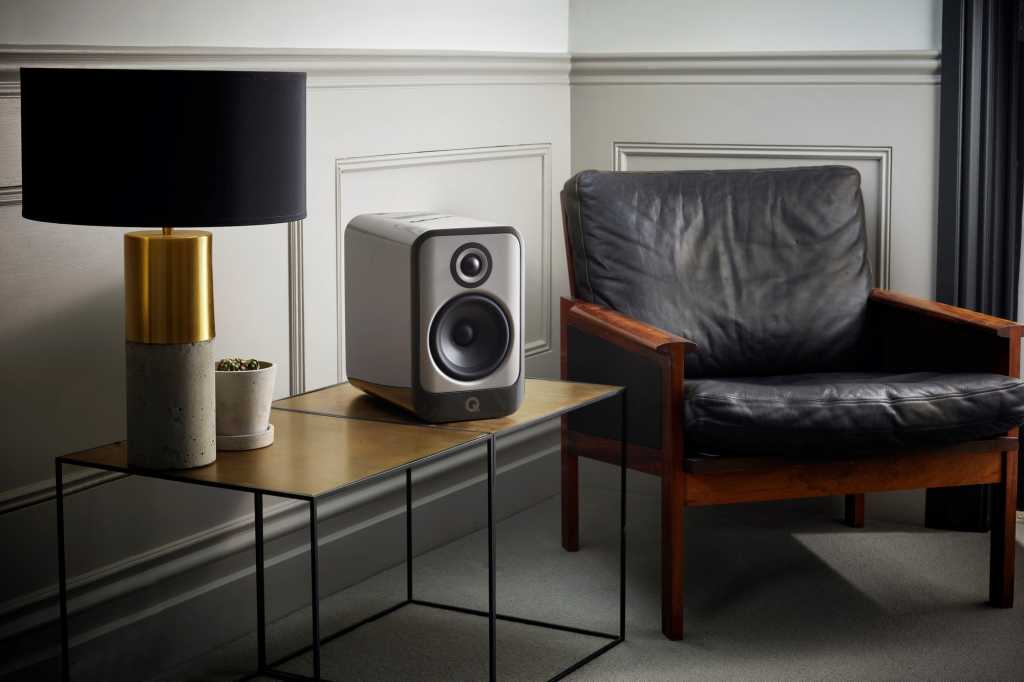 The Q Acoustics Concept 30 are outstanding loudspeakers that are as beautiful to look at as they are to listen to.

The Q Acoustics Concept 30 bookshelf speakers borrow technology and design concepts from the company’s far more expensive Concept 300 and Concept 500 lines and blend it with acoustic innovations of their own to deliver outstanding performance at a much more modest price.

Q Acoustics emphasizes these new speakers are inspired by and incorporate technology from its more expensive lines rather than augmenting the design of their highly rated entry-level Concept 20 loudspeakers. Think of it as trickle-down tech, reasonably priced speakers that have more in common with the company’s high-end offerings.

The same internal bracing system, introduced in the 500 series, prevents low-end vibrations from coloring the sound. The speakers also have a sprung baseplate suspension system that isolates the cabinets from external vibration interference.

The speaker itself is comprised of one 5-inch woofer and one 1-inch tweeter that deliver frequency response of 54Hz–30kHz. These are brand-new designs specifically for the Concept 30, 50 and 90 loudspeakers. A 3.0mm aluminum baffle plate is affixed to each drive unit before they are attached to the cabinet, forming an acoustic seal while dampening vibration and reducing structural coupling.

The Tensegrity-inspired FS75 stands are stunning. The magic of their floating compression design makes for what can be a rather complicated setup. The stands won’t seem stable and sturdy until all the screws are in place, so patience and faith are required during the assembly process. The final result is worth the hassle.

Each speaker weighs 17.4 pounds and measure 7.1 x 11.2 x 12.6 inches (HxWxD). The speakers are available in a gloss black, silver, or white finish. A cloth grill attaches to the speakers via magnets, but the front baffle plate is so striking that most listeners will want to show off the design.

What does all this dampening give the listener?

An original UK CD pressing of Talk Talk’s 1986 album The Colour of Spring really demonstrates why the Concept 30 speakers are so special. The recording itself is flawless, and there’s a remarkable amount of definition for each instrument in the mix. The album sounds great at any volume and the speakers effortlessly fill a large space, but sound equally great as near-field monitors at low volume.

The drum kit in the hit single “Life Is What You Make It” is mixed almost as if it’s the lead instrument, and it’s a track known to turn lesser speakers to audio mud. The sound here is exactly right.

A Columbia stereo LP pressing of the soundtrack to the 1966 movie The Quiller Memorandum composed by John Barry, is another album that can challenge a pair of loudspeakers. Barry used the flexatone, a percussion instrument with a sound sometimes mistaken for a theremin, as a key instrument throughout the score. The Concept 30 come through again, giving discrete definition to each instrument in arrangements that sometimes get a bit crowded in the midrange.

The Concept 30 also shine with a CD of Lucinda Williams’ Grammy-winning classic 1998 album Car Wheels on a Gravel Road. It’s also an LP that went through multiple sets of producers and engineers, beginning as a co-production with Steve Earle and Ray Kennedy before getting handed off to the E Street Band’s Roy Bittan before ending up with Rick Rubin and Jim Scott for a final mix. Car Wheels is a great reference disc because many lesser systems blur Williams’ lead vocals into the guitar. It’s a tight sonic fit in some places on the album, but there’s never a moment when that sometimes tiny space between the vocal and the instruments isn’t easily heard on the Concept 30.

Logically, there’s going to be a more pronounced low end with the Q Acoustics Concept 50 floor-standing speakers, but the Concept 30 deliver enough thump for anyone except the most dedicated basshead. If you’re living in an apartment or condo building, these speakers will give you what you need while keeping peace with the neighbors.

As I listened to the Concept 30 over the last few weeks, I often thought about how much I’d like to use them as reference speakers on a mixing project. It’s not that they’re flat in the way that made Yamaha NS-10 speakers a standard studio choice for so many years. There’s a definite signature Q Acoustics sound going on here, but it’s a balanced one and delivers the kind of transparency so critical in a studio mix session.

The Q Acoustics Concept 30 passive loudspeakers sound equally great with classical, jazz, or rock music. They’re an exceptional choice as bookshelf speakers in a small room, but they have enough punch to hold their own as the primary speakers in a home audio system if you don’t have the budget for the much larger Concept 50 floor-standers. If you’re looking for a wired surround-sound home theater setup, the Q Acoustics Concept 30, 50, and 90 (center channel) package should be an excellent choice.

Updated March 2 to correct a typo introduced during editing.