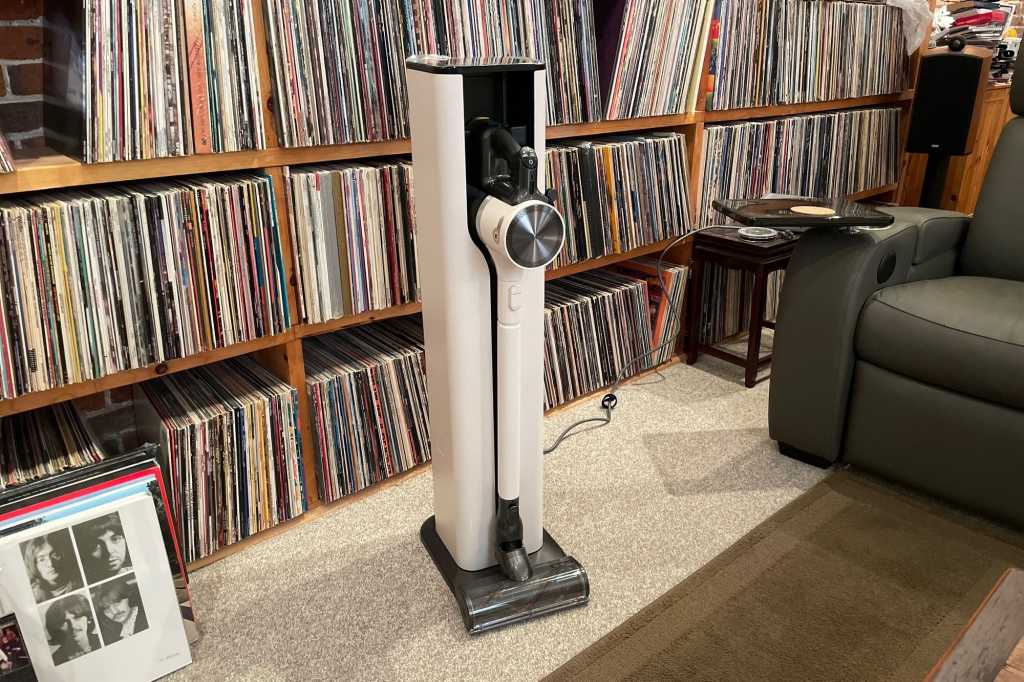 Image: Jonathan Takiff/IDG
At a glance

The LG All-in-One Auto Empty Cordless Stick Vac packs a bevy of features and an eye-catching design, along with a lofty price tag.

Premium priced ($999) and premium featured, this handsome house cleaner comes with a stylish, free-standing docking station that charges the vacuum, stores tools, and automatically empties the dust bin. If you suffer from allergies, the CordZero’s auto-extraction and transfer of dirt into a custom dust bag might make this stick vac the only one you can really live with.

This review is part of TechHive’s coverage of the best robot vacuums, where you’ll find reviews of the competition’s offerings, plus a buyer’s guide to the features you should consider when shopping for this type of product.

Visually, the most obvious difference between the pricey All-in-One and its more affordable counterparts is the former’s snazzier paint job. Dressed to the nines in a soft-white metal body with a matte finish, the All-in-One boasts a brushed-metal pipe with gray plastic accents, while the elegant and unusually functional home base (a.k.a. the “AIO Tower”) arrives with a matching design. If you can make do with the more pedestrian-looking charging stands that ships with the All-in-One’s wall-hangable siblings, there’s plenty of utility to be found in other A9 models priced as low as $399. Meanwhile, the All-in-One’s most useful upgrade, the “Kompressor” (more on that in a moment), starts showing up in models selling for $599.

All A9 models offer three levels of suction and LG’s Universal Power Nozzle, a motorized carpet/floor component with a spinning-head dirt extraction system. Operation is controlled with a nice set of one-touch buttons adjacent to the handle, meaning there’s no need to keep pressing down on a trigger. The Power Nozzle isn’t exactly self-propelled, but it plows across bare floors and most carpets with reasonable ease and gusto. Across some denser pile carpets, however, I’ve found the nozzle sweeps more readily in one direction than the other, perhaps discriminating between the woven woof and welt.

Likewise, all A9 models use easily swapped, zero-memory lithium battery packs. In the low mid-range models, you get one or two orange-cased packs with a 40-minute maximum run time. Our All-in-One bundle (A939KBGS), on the other hand, arrived with two higher-capacity batteries each capable of 60-minute max use with non-powered tools, or two-thirds that with the power head spinning at the “normal” (lowest) speed. Both packs can be charged simultaneously when the vac is seated in the AIO Tower.

Finally, all A9 models have a nifty, four-stop telescoping metal extension wand/pipe. The shorter lock spots are helpful for those of smaller stature, as well as for vacuuming staircases or blinds at close range.

Fitting with a floor-illuminating lamp, the All-in-One’s included Power Mop washes surface gunk off tile, vinyl, and hardwood floors, but it doesn’t quite live up to its name. LG says you should only put water in the Power Mop’s detachable tank, given that detergent or floor wax could clog up the works (a limitation with most robotic vac/mops, to be fair). Adding insult to injury, the power head’s spinning pair of Velcro-attached, microfiber pads operate at just one moderate speed; consequently, the pads didn’t dig deep and ferociously into the porous, uneven ceramic tile in my kitchen.

Still, I have grown accustomed to using the Power Mop for once-a-week light mopping of the kitchen floor. Complaints aside, those spinning heads do sail over the floor and remove surface grime quickly and effortlessly, leaving behind a light coating of wetness that dries up in short order. I’ve also discovered that leaving a tad of mild dish detergent on the pads after washing them provides salutary effects when swiping my kitchen tiles a second time with the same set (two pairs of pads are provided in the package).

The CordZero All-in-One’s dustbin is roughly the same size as its lesser A9 siblings. But with its added Kompressor lever and mechanism (also found in some medium-priced A9 models), you can load the tank with far more gunk. Slide the side lever up and down a couple times and you’ll  compress the accumulated mass of pet hair, grit, and fibers, thus allowing the All-in-One to cram more debris into the tank area below the maximum fill line. With compression–er, Kompression–LG calculates the dust tank can safely hold 33.8 ounces of stuff before interfering with the perforated metal air ducting on the top end. Without said smushing, dirt capacity is limited to just 13.5 ounces in lesser models.

When you return the bagless vac to its docking station, the dust bin’s contents are automatically sucked downward into a custom fitted paper bag suspended in the base end of the stand. Thanks to all that pre-compacting, the bag will fill up more slowly and thoroughly, allowing it to remain serviceable longer before the docking station’s top-mounted control panel warns you that a replacement is necessary. That’s a good thing, particularly given that LG’s disposable bags cost a lofty $19 for a three-pack. Luckily, the HEPA filtration elements in the AIO Tower are washable and reusable.

Of course, if you don’t mind suffering a little dust exposure, you can also dump the accumulated contents directly into a household trash bag. Just hover the unit over the can, pop the bottom release button, and nudge the dirt out with those Kompressor components, thus deploying the slider in a similar fashion to the tank-sweeping mechanism in certain Dyson stick vacs.

While all LG vacs have a handle-top display that shows remaining battery run time, more monitoring is available for the All-in-One via the LG ThinQ app on your iOS and Android device. Once you’ve connected the Wi-Fi vac to your home wireless network (which took a little doing in my case), the app lets you track the progress of battery charging while the All-in-One is seated on its stand, and it also alerts you when charging is completed.

Besides monitoring the All-in-One’s battery, the ThinQ app tracks weekly, monthly, and annual usage of the vac, helpful for anticipating when filter washing is needed. Finally, the software can help troubleshoot any hiccups with the vac, as well as connect you to LG tech support for problem resolution.

A non-powered crevice/brush head, a separate (and slimmer) crevice tool, and a powered Pet (hair) Nozzle are also included in the AIO Vacuum package, handy for when you’ve unsnapped the extension pipe and are using the CordZero as a cordless hand vac. Unlike other furniture-sweeping power heads that deploy a bristle brush end, LG’s spinning Pet Nozzle lifts hair with a rubber-flanged cylinder that’s quiet, efficient, and gentle, particularly when it comes to your upholstery and bedspreads.

With its grand price tag, though, the LG All in One should be packaged with yet a few more accessories, such as the quieter and slim hard-floor nozzle described in the owner’s manual but not included in this kit. There are also five more non-powered accessories–an extension hose, a flexible crevice tool, a hard-dirt tool, a multi-angle tool, and a mattress tool–that are only available in a $150 bundle.

Top-tier stick vacs like the LG CordZero All-in-One Auto Empty Cordless Stick Vacuum are so powerful and versatile, you may never use your clunky upright or canister vac again. Indeed, this thoughtfully designed, user-friendly system makes house cleaning as close to “fun” as it can get when on your feet and pushing a stick around the room.