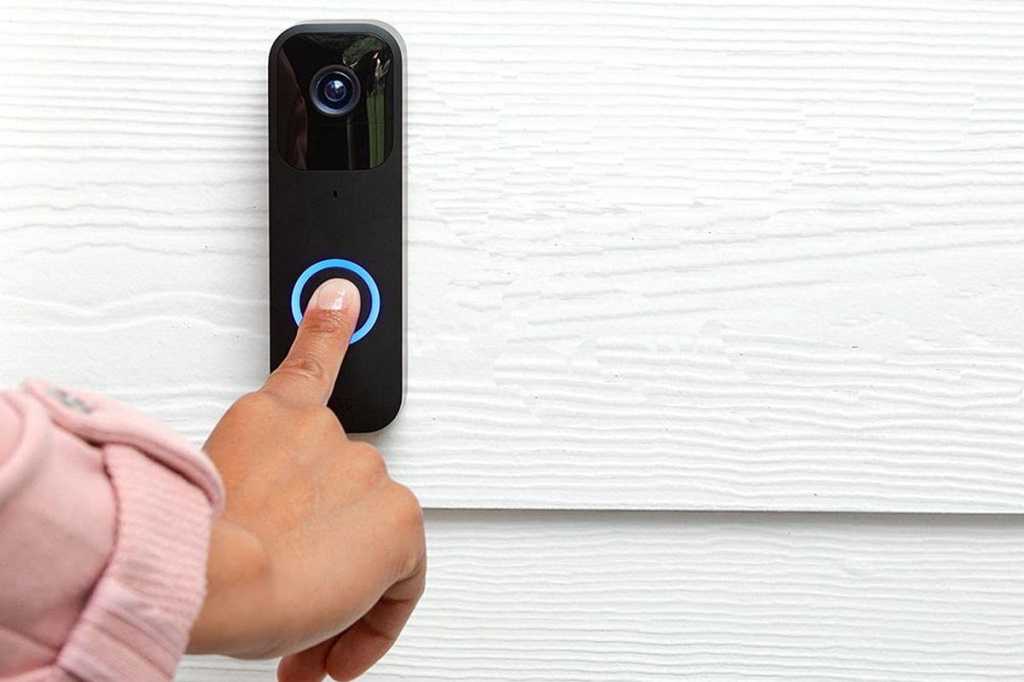 Image: Amazon
At a glance

The Blink Video Doorbell is a great device for the price and is made all the better by the optional, but inexpensive Sync Module 2.

Blink is Amazon’s other home security brand, a lower-end and less-expensive alternative to Amazon’s better-known Ring product line. The Blink Video Doorbell reviewed here doesn’t come with all the bells and whistles of more expensive porch sentinels, but it’s very good for its $50 asking price. Its quality and reliability is a step above many of the other budget-priced video doorbells we’ve tested.

Like other video doorbells, the device is dominated by a camera and doorbell button. It’s capable of 1080p high-definition video, which in our tests was good and sharp during the day. There is a night-vision function, although you shouldn’t expect to see far beyond your doorstep at night. This is a video doorbell, not a security camera.

Throughout our test, we used the doorbell with the optional ($35) Sync Module 2, a small, square indoor device that keeps a connection to the camera and allows additional functions, such as on-demand live video and local video storage. The Sync Module 2 can support up to 10 Blink security cameras, although it is not compatible with the Blink XT2, Blink XT, and first-gen Blink Indoor cameras.

Powering the Blink Video Doorbell is more complicated than it should be. It runs off a pair of AA batteries, which snap into the back of the unit, but the story doesn’t end there. The mount includes contacts for wiring into a standard 16-24 volt AC doorbell electrical supply, but you’ll still need the batteries even if you connect these wires.

The electrical supply is optional and comes into play if you want to use live view or two-way audio on demand and you don’t have the optional sync module. Why you can’t use the power supply all the time is a mystery to me and one that Blink didn’t explain. It’s an illogical piece of product design because it means you’re cursed with changing the batteries every few months even if you have the doorbell wired up.

Like its competitors, the doorbell comes with a bracket that is attached to your house or anywhere near the front door. If you’re installing it in a corner or need to angle its 135-degree horizontal, 80-degree vertical field of view, you’ll need to purchase the appropriate wedge mount ($7.99 each).

Getting the doorbell onto the bracket was tough. At first it wouldn’t clip on, so I ended up removing the bracket and studying how it is meant to attach into place. After that, and with a fair amount of force, I managed to get it to snap into the bracket. It’s a solid connection, which should make it difficult to steal.

Blink Video Doorbell in use

The doorbell delivers a nice, sharp image during the daytime and is fast to react to movement in my tests. An alert popped up on my phone within 2 to 3 seconds of walking past the camera and within a second of pushing the doorbell button.

Connecting to the doorbell and seeing the live view once you get an alert takes slightly longer. It took anywhere from 5 to 10 seconds to make the connection, which means you might miss whatever triggered the alert. The video will be recorded if you have the subscription plan or storage in the optional Sync 2 device, but if you have the video doorbell alone, this is something to consider.

It wasn’t perfect every time. Occasionally it would alert me late or miss something. Conversely, sometimes it would alert me and I had to spend a few seconds trying to figure out what movement it had spotted. When this happened, it was usually with nighttime images.

The app contains several settings that can fine tune how the camera works.

The activity zone setting splits the images into a 5×5 grid, and each zone can be set to active or inactive. The latter is useful if movement in the image frame is constantly triggering the camera. There’s also a privacy function that allows two zones to be set in which no detection takes place and no video is recorded. The former setting can be useful to prevent the movement of a tree or shrub triggering the camera, the latter can provide a neighbor with a degree of privacy.

Camera sensitivity, the delay in rearming the camera after movement, and clip length can also be defined by the user. I found a sensitivity setting of 7/10 was the sweet spot for me.

I found night-vision to be pretty poor at first, so I ended up switching the intensity of the infrared LED to maximum. This will reduce battery life, but it resulted in more useful nighttime images.

One interesting function is the ability for the doorbell to snap a still image once an hour and store it as a series of images in the clip database. I switched it on but found it unreliable: in the last 24 hours, it’s stored 9 images.

If you don’t have the Sync Module (first- or second-generation), the Blink Video Doorbell relies on cloud storage to keep video files from the camera. At the time of this writing, an annual subscription for a single camera is $30. If you have several Blink devices, you can get an annual plan for $100. Respective monthly prices are $3 and $10.

You can use the doorbell without a subscription or the Sync Module, but then you’ll only get alerts and a live view when the doorbell senses action or someone presses the button. So, if someone comes to your door during the day and you see the alert, you’ll be able to see and talk to them through the doorbell. But if it catches movement at night and you don’t see it until the next morning, you’ll have missed whatever happened and they’ll be no stored video.

As mentioned, I used the video doorbell with the optional Blink Sync Module 2 ($35). This device is a small, USB-powered indoor unit that keeps a connection between the Blink Video Doorbell and your Wi-Fi.

Without the Sync Module 2, the doorbell connects direct to your Wi-Fi network and allows a live view immediately after it’s triggered by movement or a button press. With the sync module, you can initiate a connection from the app and watch live video at any time. This can be very useful.

The Sync module also allows local storage of video if you connect a USB thumb drive to it, so you can store video without a cloud plan. All-in-all, the Sync Module 2 is not a bad deal for $35.

My tests of the module got off to a shaky start with the inability to access a live view from the doorbell, but that was solved with a little experimentation on placement of it near a window. Once the connection was solid, everything worked well.

The Blink Video Doorbell is a great performer for the money. All too often with lower-end devices, the software is clunky, the detection is crude, and/or the product offers too few ways to adjust or fine tune the detection; that’s not the case with this device. If you’re considering buying it, take a look at the optional Sync Module 2 as well. The on-demand live view with two-way audio is a great feature, and you can avoid subscription charges.

Correction, March 29: This review was updated to correct our reporting related to the Blink Video Doorbell’s power requirements. If you have low-voltage wiring in place–if you’re replacing an existing doorbell, for example–the doorbell can use it. However, it will still depends on battery power for full functionality unless you also have the optional Sync Module 2 ($35).