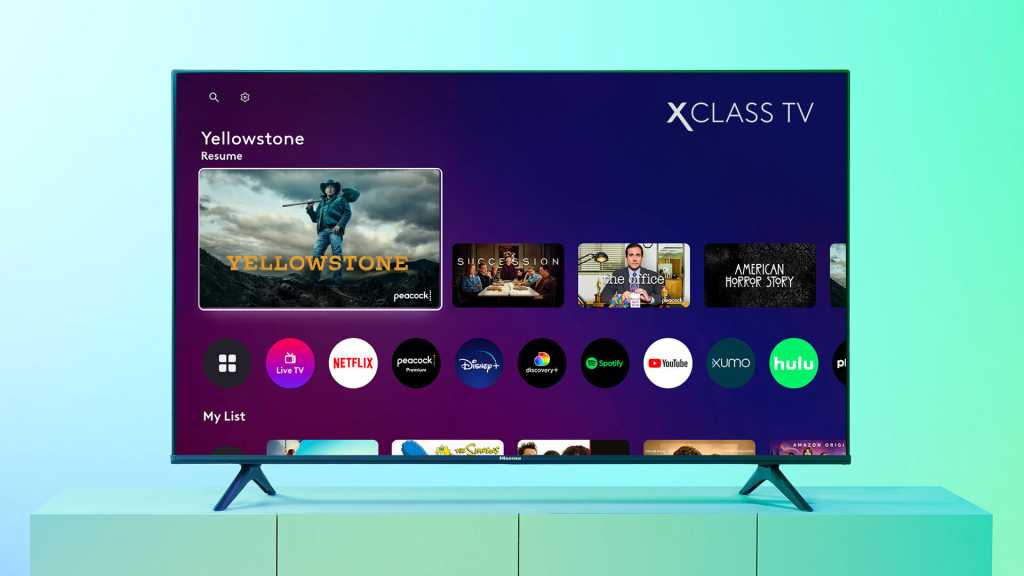 Image: Comcast
At a glance

Comcast’s smart TV software needs improvement to take on the likes of Roku and Google TV.

Despite my enthusiasm for cord-cutting and my wariness of cable companies, I’ve tried to give the Hisense XClass TV a fair shake.

This is the first smart TV powered by Comcast software (though you wouldn’t know it from the packaging, which bears no mention of the cable giant’s name), and the experience is similar to Comcast’s X1 cable boxes and Flex streaming players. I’ve heard positive things about X1 and was eager to see if the software could compete with the likes of Roku and Amazon Fire TV as a standalone steaming platform.

As of now, it cannot. While Comcast offers some smart ways of organizing online video, its platform suffers from limited app selection, missing features, and occasionally pokey performance. Comcast might be accustomed to having little competition in the TV realm, but streaming is a different ballgame with no shortage of well-polished options. If the company wants to be a contender, it’ll need to put in a lot more work.

The XClass TV that I reviewed is Hisense’s 50-inch A6 Series (50A6GX), with a list price of $348 ($295 exclusively at Walmart at the time of this review). Hisense also makes the 43-inch (43A6GX) with a list price of $295 ($258 at Walmart the time of this review). Both are full-array 4K LED panels with HDR10 and Dolby Vision support. (They also come with a year of Peacock Premium, which makes sense given that Comcast owns NBCUniversal.)

At first glance, it seems like a solid value. Hisense’s comparable Roku TV has the same list price, for instance, but it lacks the XClass TV’s Dolby Vision and Dolby Audio support. The XClass TV also has a nice design for its price range, with a display panel that runs nearly edge to edge and has only a narrow frame behind it. Around back, the TV has three HDMI inputs (one of which supports eARC for audio), a composite video input, a coaxial input for an over-the-air antenna, a USB-A port, optical audio output, an ethernet jack, and a dual-band Wi-Fi 5 adapter.

Yet Comcast and Hisense declined to provide specifics about the type of display panel on offer. The product page describes the TV as “full array,” but the two companies won’t discuss contrast levels, peak brightness, or local dimming zones.

A bit of time watching TV might explain why: In Netflix’s Formula 1: Drive to Survive in 4K Dolby Vision, colors seemed a bit washed out, and the TV came nowhere close to true black while running a local dimming test video on YouTube. Though it has a slick exterior, it’s still a budget TV in the end.

Meanwhile, the remote control is comfy, with big buttons that are easy to click, and antenna users will appreciate the number pad for quick channel access. But the absence of dedicated fast forward and rewind buttons is an issue in some apps such as Disney+, which makes you click through on-screen menus to reach those functions.

In lieu of killer hardware, the XClass TV’s biggest distinguishing factor is its software. But compared to other streaming platforms, Comcast’s feels incomplete.

Instead of offering an app store for services like Hulu and Paramount+, XClass provides a curated selection of apps through a single menu without making you install or uninstall anything. This does cover most major streaming services—Netflix, Amazon Prime, Disney+, and HBO Max among them—and the apps themselves look and behave the same way they do on other platforms.

But once you start poking around, the omissions pile up. Live TV streaming options are limited, for instance, with no access to FuboTV, DirecTV Stream, Philo, or Frndly TV. Apple TV+, Funimation, and Crunchyroll are also missing—though Comcast says Apple TV+ is coming “soon”—and on the music side there’s no Tidal, Apple Music, Deezer, or Qobuz. Over-the-air DVR enthusiasts will also miss Tablo, Plex, HDHomeRun, and Channels DVR. As a result, you may still need a separate streaming player to watch what you want.

For the apps that XClass does have, the TV offers some helpful ways to sift through their catalogs.

The top of the home screen lists your recent apps, over-the-air channels, HDMI inputs, and any movie or shows you’ve launched through XClass’s menu system. Further down, you’ll find recommendations for movies and TV shows, sorted into rows like “2022 Oscar nominees,” “What to watch this week,” and “Movies on now.” As you might expect, a fair amount of self-promotion from Peacock and Xumo—both services owned by Comcast—is scattered throughout.

A voice search button also lets you look up specific programs, actors, and genres. For any item on the home screen or in search results, hitting the + button adds it to XClass’s watchlist. When you select a program, XClass tells you where to watch it and can link directly into the corresponding app for playback.

But like other attempts at building a universal streaming guide, Comcast’s approach has its limits. You can’t rearrange XClass’s app list, nor can you customize which streaming services show recommendations on the home screen, and figuring out which service a program belongs to always requires one or two clicks. There’s no easy way to add Netflix shows to your watchlist either, because searching for them always just takes you right into the app.

While the “recents” row at the top of the home screen is supposed to help you pick up where you left off, the way it’s confusingly laid out, with recent apps spreading out to the left and shows stretching out to the right. (Also, unless you launch a program directly from XClass’s home screen, it doesn’t show up in this row at all.)

Meanwhile, XClass’s genre search results were often disappointing, with a search for “Comedy movies” turning up seemingly random titles such as #1 Mom So Hard and JT Leroy (described by Wikipedia as a biographical drama) in its top results. The TV also failed to deliver relevant results for detailed searches, such as “70s sci-fi movies” and “James Bond movies with Sean Connery.”

The interface is also a bit sluggish overall. The “recents” row, for instance, often takes a few seconds to reload when you return to the home screen, and you won’t get the smooth 60-frames-per-second animations found on other streaming platforms.

Comcast’s home screen does have some nice touches, like the Rotten Tomatoes scores and Common Sense age ratings that appear alongside each recommendation, and its overall philosophy toward organizing the streaming landscape is sound. But the whole system just needs a lot more streamlining and more ways to personalize the interface to keep up with the likes of Roku, Fire TV, and Google TV.

XClass TV falters in several other ways beyond the core streaming experience.

Most notably, Comcast’s software gets in the way of using other inputs. Whereas some TVs let you toggle between devices by hitting the input button, on XClass this merely takes you to a row on the home screen where you must select an input with the directional pad. Turning the TV off and on again also takes you back to the XClass home screen instead of returning to your last input. (On the upside, the TV does support HDMI-CEC, so external streaming devices can switch inputs automatically when you use their remote controls.)

The TV’s over-the-air antenna integration could also be better. While it does include a grid-based channel guide and supports launching live channels by voice, there’s no mini-guide or preview window for seeing what’s on other channels while you watch. The antenna also lives in a separate menu from other inputs, so you can’t switch over to it using the input button.

On the audio front, the TV offers a Dolby Volume leveling feature, which is great for keeping all video sources at a consistent volume, and there’s also a dialog boost function to make voices louder. Still, it’d be better if those features weren’t buried two layers into XClass’ settings menu. And while you can technically connect Bluetooth headphones or earbuds for private listening, the TV remote is incapable of controlling the volume on those devices.

A TV without a purpose

One can certainly understand why Comcast wants to get into the smart TV business. The company has been losing pay TV subscribers for the last five years, and while it’s still doing just fine thanks to its internet service, it has an opportunity to revive TV revenues by making its streaming platform more broadly available to non-Comcast customers.

None of that has yet translated to a clear case for why TV buyers should care. If you’re in the market for a smart TV less than $400, you’re better off buying one that’s pre-loaded with Roku, Fire TV, Android TV, or Google TV software. In all cases, you’ll get a better app selection, more useful menus, and extra features such as private headphone listening.

Comcast did a fine job hiding its name from Hisense’s XClass TVs, but as a new entrant in the smart TV wars, it can’t cover up its lack of experience.