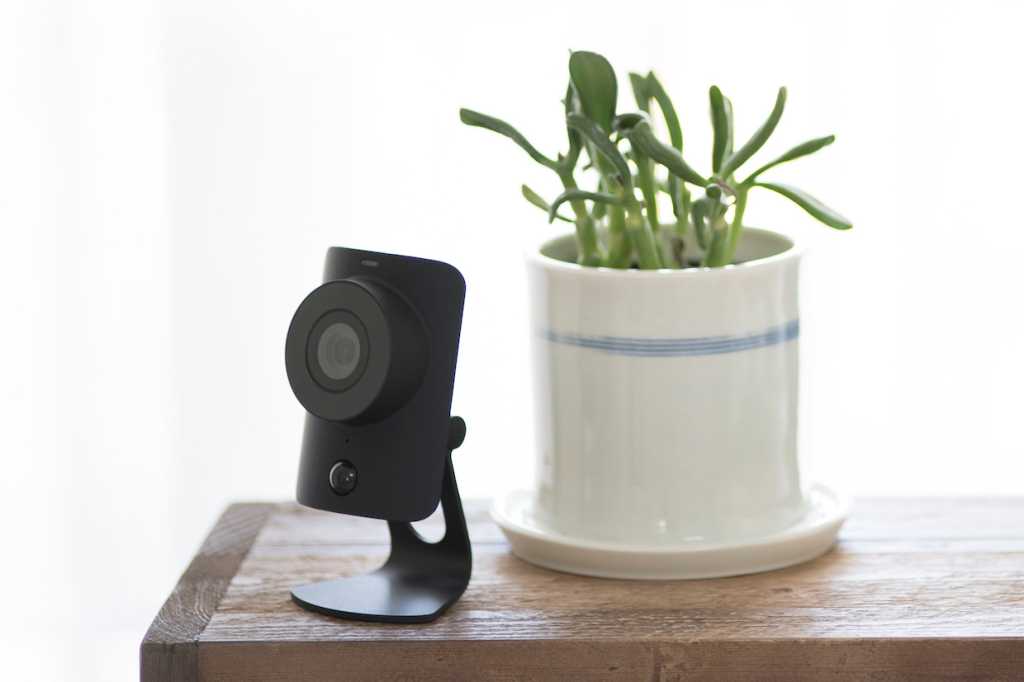 Image: SiimpliSafe
At a glance

SimpliSafe has made a name by providing basic, no-nonsense smart security products, and its indoor SimpliCam is no exception to its lineup. This basic camera is clearly built for simple security needs; users looking for a more robust set of features will likely need to head for greener pastures.

The camera, which measures just 4.6 x 2.6 x 2.1 inches (HxWxD), sits daintily on a hinged stand designed for bookshelf use. (You’ll need third-party gear if you want to mount it on a wall.) Curiously, the camera is black, while nearly all other SimpliSafe gear is a shade of white. The camera has no battery and requires full-time wall power via a wall wart and a micro-USB cable (included).

Specs are basic and expected: a 1080p sensor, plus a lens with a 120-degree field of vision. Two-way audio is included, as is infrared (black and white) night vision. The camera features a rather bright status light which can be disabled in software. Finally, the camera features a “privacy shutter” feature, a steel shutter which (loudly) snaps open and closed depending on how you have the camera set. If you’re only using it for on-demand viewing, the shutter can be set to remain tightly shut at all other times. On the other hand, if you’re using it for automatically recording detected motion, you’ll want to leave the shutter open.

While the SimpliCam can be used without a SimpliSafe security system, my expectation is that few users would purchase this camera as a standalone device. There’s no onboard storage, and the camera only records to the cloud. You can purchase 30 days of storage for $10/month for up to 10 SimpliSafe cameras (an outdoor camera and a video doorbell are also available).

Whether you pair it with the alarm system or not, you’ll be setting things up via 2.4GHz Wi-Fi. As with the outdoor camera, I had no issues during setup–it’s just a few steps in the SimpliSafe app, followed by showing a QR code displayed on your phone to the camera–but once I began using the camera, trouble reared its head.

The camera worked fine for live viewing, but any time I tried to play back a recording, the SimpliSafe app crashed. This was consistent, to the point where SimpliSafe spent a week working with me to try to figure out what was going on. Ultimately it was revealed to be an arcane bug in the app, requiring a new version of the app to be pushed to the app store.

From that point on I was able to use the camera with more success, playing live video and motion-triggered recordings through the app. By default, the SimpliCam app is set to the lowest level of motion sensitivity, so you’ll only get humans (or larger) walking through the frame. If you want to use the camera to keep an eye on pets, you’ll need to dial sensitivity up to its highest setting. Even then, I found the camera missed some cat action in the room while recording a motionless room on other occasions.

I did encounter a fair amount of trouble with abrupt disconnects from wireless and weird “no video” errors during playback, where the screen would suddenly cut to black with an error, or simply get stuck at some point during a recording. But by and large, the video was still usable enough to see most of what had gone on in the scene. Video quality is much better during daylight than at night; the infrared mode is rather fuzzy and indistinct.

To be sure, better and cheaper cameras are widely available, so if you’re looking for a standalone indoor security cam, this probably isn’t the best bet. That calculus changes if you’re a SimpliSafe user and you want a camera that integrates with the rest of your professionally monitored security system. In that case, it’s not a bad bet. SimpliSafe sells the camera directly for $99, but keep an eye out for discounts online, which seem common.