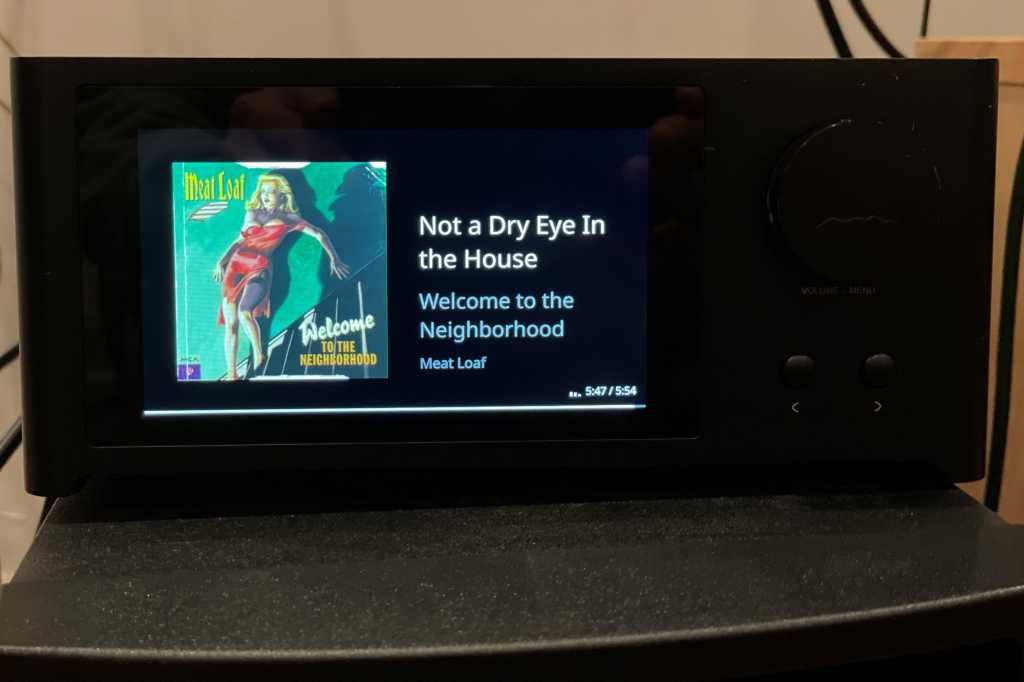 The price tag can be intimidating, but the NAD C 700’s design, build quality, and exquisite audio performance fully justifies it.

Don’t let its small size and minimalist design fool you, the NAD C 700 BluOS Streaming Amplifier is a seriously high end, versatile, and robust audio streamer with an integrated amplifier. Smartly engineered and precisely tuned, this “just add speakers and go to town” entertainer has the sonic goods to wow the most critical audiophile.

Born from the same Canadian stable (Lenbrook Group) that delivers the Bluesound line of music streamers, the NAD C 700 likewise taps the BluOS operating system (with companion apps for Android, iOS, macOS, and Windows), enabling it to stream high-res audio–up to 24-bit resolution and sampling rates as high as 192kHz—to as many as 63 zones. It can also shake hands with third-party BluOS gear from the likes of DALI, Monitor Audio, and Roksan.

Looking at its specifications, you might suspect the $1,499 C 700 is just a pricier variant of the $949 Bluesound Powernode, gussied up with a fancy display (which is quite useful in the right home environment) and a richer collection of inputs/outputs. But if NAD expects to fetch a 50-percent markup over its stablemate, the C 700 better sound a lot better, too. As luck would have it, I still had a loaner Powernode in the house, so I did a head-to-head comparison. Can you guess which I’d ultimately prefer? 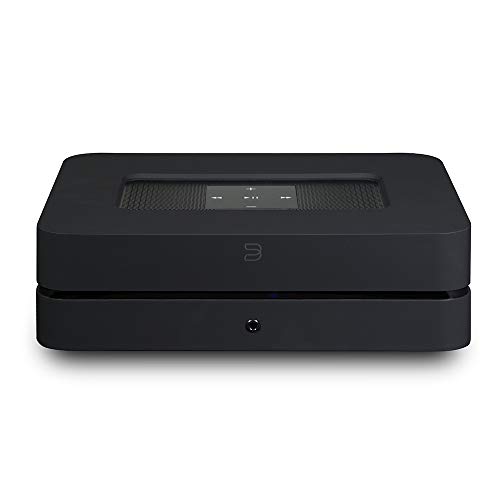 The C 700 and the Powernode both use NAD’s sophisticated and cool-running HybridDigital Class D amplifer, rated to deliver 80 watts RMS per channel (into 8 ohms). When pressed, this amp can cleanly boost its dynamic peak power to 120 watts. And they’re both outfitted with the same quad-core ARM processor.

Further inspection, however, reveals that the C 700 has a beefier power supply, and it trades the Powernode’s Texas Instruments DAC (digital-to-analog converter) for a better-regarded ESS Sabre 9028 9010. These upgrades contribute to a difference in sound tuning and personality that this obsessive reviewer detected often in several weeks of comparative testing, connecting and swapping the streamer amps at turns to two sets of similar (with matched tweeters and crossovers) Q Acoustics bookshelf speaker pairs—models 3020i and 3030i—and also on occasion with an engaging (and not expensive)  pair of PSB Alpha Series P5 speakers, another Lenbrook family brand.

Being a curious type, I also pitted the NAD and Bluesound units briefly against a 125-watts-per-channel Sonos Amp. While certainly quite nice for casual listening sessions, the Sonos pales in a serious A/B comparison, suffering from the sin of sonic flatness with reduced dynamics, less detail, and a serious shortage of air separating the instruments and voices. I groused about a similar lack of personality in my Sonos Port review.

As a performer, the Powernode seems to strive harder (than its sibling) to sell the sizzle as well as the steak in its delivery of high-res and ultra-high res streaming services available via BluOS, including Qobuz, Tidal (with MQA), Deezer, Amazon Music Ultra HD, the Idagio classical music site, the live concert service Nugs.net, and an MQA-enhanced quartet of Radio Paradise streaming channels, the last being a BluOS app exclusive. Multiple times over I made note that percussion seemed to pound with a harder edge when played on the Powernode; vocals seemed more in your face. The latter was sometimes for the better, but it also exaggerated microphone distortion, as I sensed on the hardest-rocking shout-outs that lead off Elvis Costello’s new album, The Boy Named If. I had a similar experience with Lowell George’s intentionally compressed vocals on a newly-unearthed 1974 Little Feat radio concert find: Electrif Lycanthrope,spotlighted in Hi-Res form on Qobuz.

By comparison, the C 700 comes off like the cool, calm, and collected cat in the room, first showing its laid-back, non-showboatin’ nature with a slower-building in-app volume control that takes its own sweet time impressing you. Ever balanced and wonderfully organic (never clinical) in sonic presentation, the C 700 remains exceptionally stable under fire with extra headroom in reserve. That easy confidence, in turn, often gave this listener the encouragement to just sit back, dwell in the moment, and enjoy the magic.

It’s no secret that Q Acoustics 3030i bookshelf speakers put out phat bass notes (down to 46Hz) punching well above the boxes’ weight and size class. But until now, I’ve never realized how accurate, tight, deep, and well-rounded those speaker tones and textures can sound when wired to a first-rate audio cranker like the NAD C 700. Better still, this is an extra-smooth operator across the frequency spectrum and stylistic range. Flowery acoustic folk and jazz material unfolds with both precision and breathtaking lyrical sweep. And even the most densely packed material (grand orchestral, polyrhythmic world beat, electronica, hip hop) keeps all the parts in motion, distinct, and in proper proportion.

Fred Hersch’s new ECM-ish chamber jazz Breath by Breath, with the Crosby Street String Quartet, and Aimee Mann’s string ensemble-enhanced memory suite Queens of the Summer Hotel both put me in the room where it happened. And while Mr. Costello’s new love-gone-bad ballad Paint the Red Rose Blue could probably get me teary played on an iPhone speaker, the tune evokes seismic emotional tremors every time I play it through the nuanced NAD streaming amp, enhanced by an extra dollop of bittersweet pain in his curdled vocal, the perfect pealing of tuned percussion, and the throbbing heart in Steve Nieve‘s  Beatles-esque keyboard lines.

Not just a pretty face

While initially suspicious of the C 700’s 5-inch high-definition color display, I’ve come to appreciate it as much more than high-gloss eye candy. Even viewed from 9 feet away, the LCD screen is sharp enough to deliver album art and credits and to track progress from your selected streaming source. Likewise, it displays artist graphics via music services that take advantage of the higher bandwidth of Wi-Fi versus Bluetooth: Apple AirPlay, Spotify Connect, and Tidal Connect.

Plop this small, 3.8 x 8.6 x 12-inch (HxWxD), sturdy 10.6-pound box on a shelf at an appropriate height and its front-panel controls become very user friendly. A large twirl-and-push knob adjusts volume and menu options and works with two navigation buttons below it to shift the track and adjust amplifier settings. I found the front panel controls especially helpful for sifting through my custom list of 40 presets (the max), which can include internet radio stations and playlists. Contrast that with the top mounted control on the Powernode, which offers just five dedicated presets. Almost all the menu options on the NAD C 700 screen can also be accessed on the app—excepting, oddly—the lip synch adjustment, which I’d much rather fine-tune from the sofa.

Album art/info displays from streaming sources are mirrored on a connected TV. With incoming content from a connected device, the NAD C 700 screen entertains with left- and right-channel quasi-VU meter action. The needle bouncing is not technically precise, but it happens relatively in synch with the channels and is fun to watch.

With speakers placed evenly to the left- and right-hand of a TV, the C 700 also serves quite nicely as a two-channel or 2.1-channel home theater system, thanks to an HDMI-eARC port that senses and switches the box to the correct input when you turn on a connected TV with HDMI-ARC support. An optical connection to a TV also is available and lip-synch adjustable. The subwoofer port is activated in the BluOs app and fine-tuned with a crossover feature that simultaneously implements a low-pass filter for the sub and a high-pass filter for the main speakers. (If available on your subwoofer, twist its crossover frequency setting to “LFE.”)

Movie viewing was more enjoyable with an C 700 in play. While the quirky superheroes of The Suicide Squad (on HBO Max) couldn’t chase their monster starfish nemesis all around the room (as they could on the 4.1-channel-upgradeable Powernode), there was plenty of sonic excitement to fill my space, entertaining me and the cat.

I likewise had a fine time digging into audio-enhanced YouTube content with the C 700, catching up on cached sessions of master picker/singer Jorma Kaukonen from the Fur Peace Ranch, and digging into the recent clip history of Lawrence, an impressive young brother-and-sister-fronted pop/soul group. If you like Lake Street Dive, you’ll love Lawrence. Think hook-happy songs, great vocalizing, stellar keyboard work, and a snazzy horn section. They’re savvy in the engineering department, too.

If your connected TV can juggle other connected video sources, consider substituting the ultra-compact NAD C 700 for the big ol’receiver that’s been occupying (and heating) a significant amount of listening room real estate. Or, conversely, you can exploit the C 700’s available pre-amp outputs to use the unit as a web-connected front end for a higher-powered amp or A/V receiver. 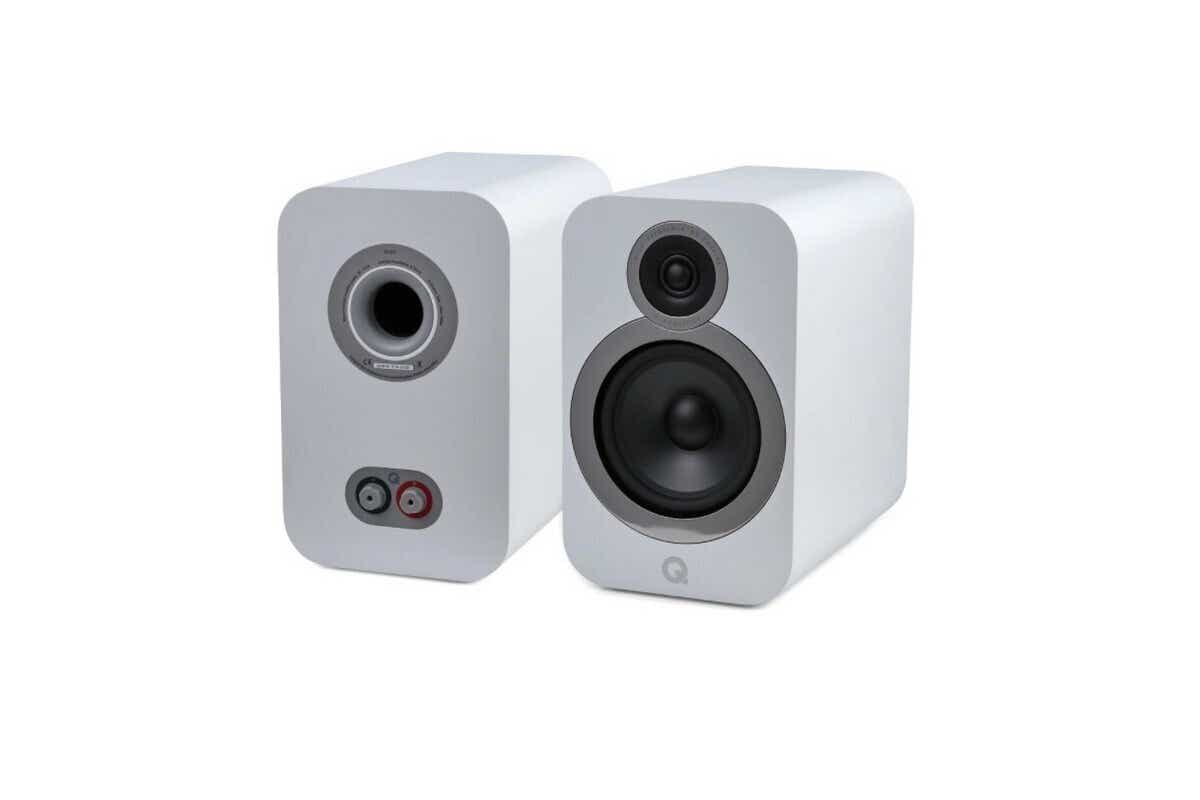 The C 700 has just one HDMI port, but it’s well-appointed rear panel does include two pairs of line-level analog inputs, coaxial and Toslink (optical) digital inputs, and a USB-A port for hosting a storage device. You can connect the streamer to your home network via Wi-Fi 5 or with a gigabit ethernet port.

Control options include a 12V trigger output and an IR remote sensor input. Limited voice operations can be implemented via an external smart speaker or smart display powered by Amazon Alexa, Apple Siri, or Google Assistant. If you’re looking to integrate deeper into your smart home, drivers are available for the Control4, Crestron, Elan, RTI, and other high-end ecosystems. Roon users will be happy to know the C 700 is Roon Ready.

Clearly, the NAD C 700 has the goods to make you as happy as it has me. Its combination of superb sound, compact build, access to high-end sources, and efficient operation make for a charming jewel-box package. And the price tag isn’t really that dear when you consider this thing’s ability to make a $469 pair of speakers (the 3030is) sound as rich and rewarding as sets selling for twice the price.

Updated February 16, 2022 after NAD informed us they had provided us with the incorrect ESS Sabre DAC model number during our fact check.