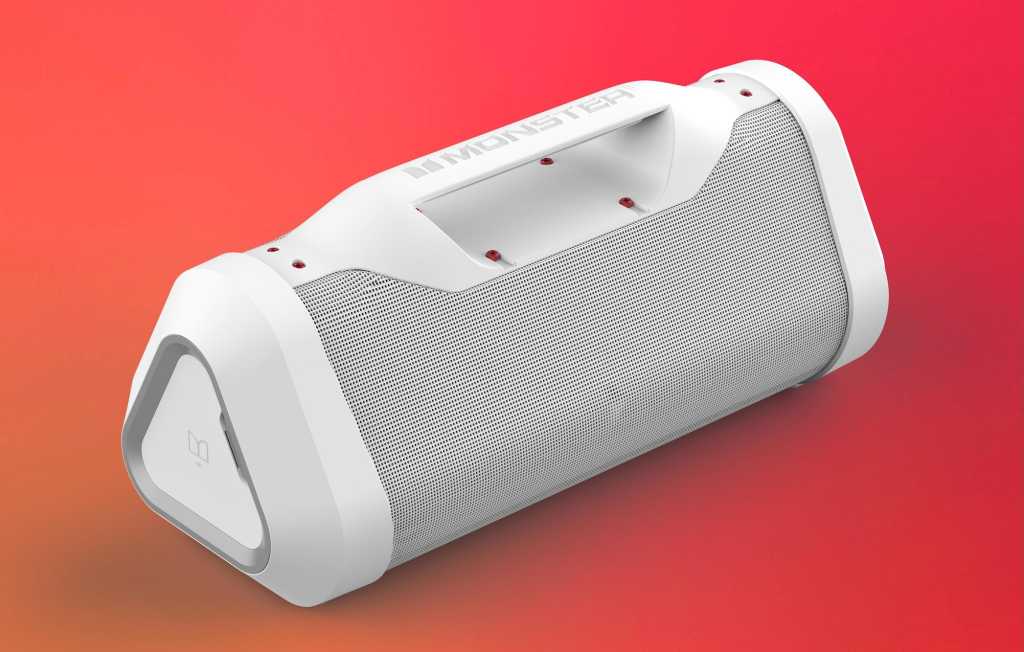 Image: Monster
At a glance

Monster’s latest is indeed an audio monster, though battery life may hamper some users.

Monster is no stranger to the audio space, and with its Blaster 3.0 the company hits the scene with its most powerful Bluetooth speaker yet. The Blaster 3.0 is a full-on boombox, complete with a beefy handle that allows for shoulder mounting.

The Blaster’s triangular design and steel mesh speaker grille give the speaker the appearance of a toolbox, particularly with the red version I reviewed (black and white models are also available). If nothing else, the speaker is a solid conversation piece. Meanwhile, the IPX4-rated weatherproofing (click here to learn more about IP ratings) should protect against the occasional splash of water.

With 120 total watts of power divided among a 60-watt subwoofer and four 15-watt drivers (which are placed to fire both forward and back), the Blaster 3.0 packs plenty of power. Aside from the logo on the handle, there’s no real way to discern which side is the front; the minimal set of controls can be found on one of the triangular ends, and various ports are lined up on the other side, beneath a rubberized flap.

Let’s talk about those ports first, of which there are four: an A/C power port (a power brick and charging cable are used to juice up the 5200mAh battery), a USB-A charging port for your phone or other accessory, and two 3.5mm audio-in jacks (a standard AUX jack and a microphone input) that let you use the system as either a PA or for broadcasting your karaoke sessions. Incidentally, you’ll need that microphone jack to use the Blaster 3.0 as a speakerphone, given the lack of a built-in mic.

You’ll find a few basic controls on the opposite end of the speaker, including a power button and volume controls. The only additional control is the “mode” button, which uses the device’s onboard DSP to toggle between two available audio modes: indoor or outdoor, which are fairly self-explanatory, the latter offering a bigger, bass-ier sound. I felt the outdoor mode version sounded better even in the confines of my small office, but your mileage may vary. It’s important to note that these two modes are the only ways to shape the sound of the Blaster 3.0, since there’s no companion app with EQ sliders or other fine-tuning features. Small LEDs with tough-to-read labels indicate the selected sound mode, volume, and battery life.

Weighing in at a back-breaking 13 pounds, the Monster Blaster 3.0 will give anyone who totes it quite the workout, but that extra heft doesn’t translate into days-long battery life. For its part, Monster only promises 12 hours of playback on a single charge, while my testing achieved about 15 hours at moderate volume. That’s enough to get you through most of a day, but dialing up the sound will severely impact that benchmark.

The speaker pairs quickly over either Bluetooth or NFC, and I experienced no trouble with signal droppage during my testing, with range reaching about 50 feet (obstructed). Audio quality is great; I didn’t find any music or other type of audio source that didn’t sound good piped through the Blaster. Place it too close to a wall, however, and the Blaster hits with a surprisingly directional, mono-like character (and there’s no way to pair multiple units to create a left/right scenario, either). You can always power through any soundstage issues by simply cranking the volume, though the audio starts to get distorted at the upper echelons of the Blater’s explosive output. (No aptX support here, by the way.)

You’ll find only a handful of Bluetooth speakers in this power band, most of which run cheaper than the $399 Blaster, and you’ll also find more fully featured devices on the market. However, based on the speaker’s impressive hardware and audio quality, it’s decidedly worth a look.