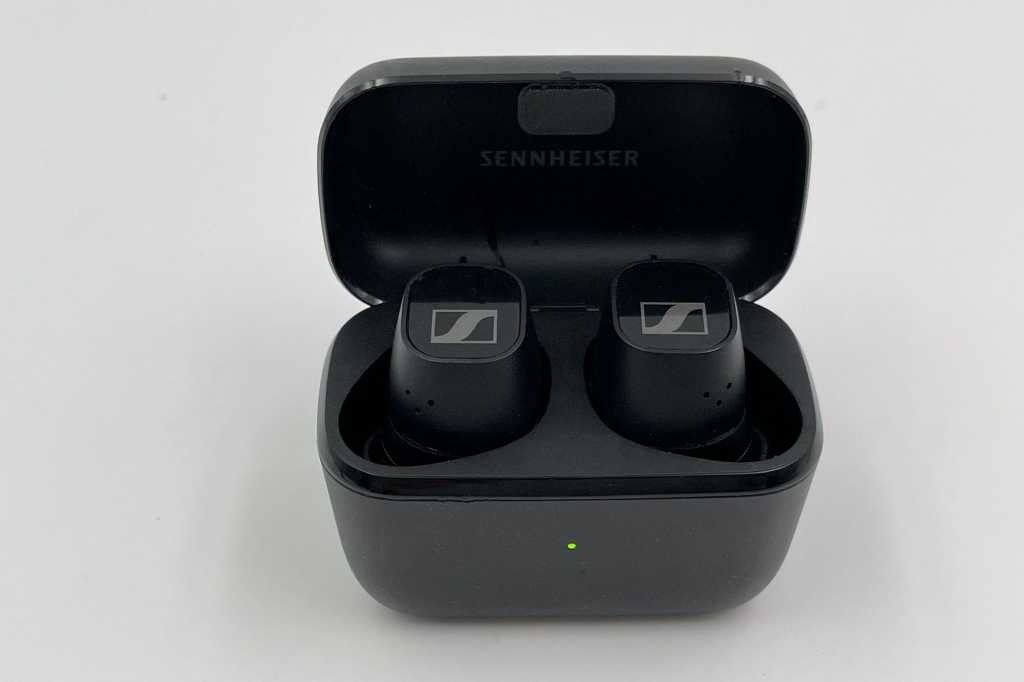 Sitting between the entry level CX ($129) and the top of the line Momentum True Wireless 2 ($299), Sennheiser’s $179 CX Plus True Wireless is the proverbial “middle child” of the manufacturer’s wireless earbud lineup. But while Sennheiser has clearly cut some corners in terms of sonics and design, the CX Plus still packs plenty of value thanks to a bevy of high-tech features, solid active noise cancellation, and competent overall audio performance.

One of the first things you’ll notice when you unbox the Sennheiser CX Plus is its size. The included USB-C charging case dwarfs the cases of Apple’s AirPods Pro and B&O’s Beoplay EQ. And while the charging case may shorter than the Bowers and Wilkins’ PI7, it is stockier, making for a more awkward fit in my front pocket. A deal-breaker? No, but the bulky design is a tad annoying.

The slippery plastic of the CX Plus’s case calls attention to itself in a way that I wouldn’t call flattering, while the rounded and high-gloss lip gave me the impression (initially, at least) that the top of the case wasn’t properly closed. On the bright side, the design does allow you to open the lid easily and confidently every time. But overall, Sennheiser appears to have cut some corners in terms of the look, feel, and weight of the case.

The CX Plus fit great in my ears thanks to Sennheiser’s solid and secure “twist and lock” design. At times during activities and during long listening sessions, I did need to readjust the fit of one or both earbuds. That said, the CX Plus follows a recent pattern of true wireless headphone designs that give wearers confidence that their buds will stay put, even during periods of rigorous activity.

The CX Plus did a fine job of communicating its status. I applaud Sennheiser for including such a well implemented feature as it helps orient you to the headphone’s functions. Pulling the earbuds out of their case, I was greeted with a “Power on, connected” prompt to let me know everything was ready to stream. Once you’ve mastered the way the earbuds behave, you can change the prompts to tones or turn the alerts off completely through Sennheiser’s companion mobile app.

The Bluetooth 5.2-compliant Sennheiser CX Plus gave me nearly 90 feet of solid connectivity with line of sight, and connections through walls or floors weren’t shabby either. I could climb a flight of steps without interruption, and I got roughly 60-70 feet of solid performance through closed doors and walls before the signal began breaking up.

The CX Plus support such Bluetooth codecs as SBC, AAC, aptX, and aptX Adaptive, the latter being the latest generation of aptX codecs that delivers adaptive bitrate streaming, low latency, and HD audio. Take note, if you’re pairing the CX Plus with a hi-res music player that supports the older aptX HD codec, you’ll be disappointed to learn that aptX Adaptive will not support aptX HD on true wireless earbuds like the CX Plus. The best you’ll get is plain-old aptX.

The CX Plus arrive with an IPX4 rating, which means they should be resistant to water sprayed in any direction (click here for our guide to IP ratings). In practical terms, the earbuds should be fine to wear during sweaty workouts, or if you get caught in a rain shower. If you drop the buds in a pool, though, all bets are off.

Each earbud sports a roughly 55mAh li-ion rechargeable battery, while the charging case’s battery falls in the 400-420 mAh range. Sennheiser promises up to 24 hours of playing time from the CX Plus with the charging case, and that it takes approximately 1.5 hours for the buds to get a full charge.

In my casual testing, a single earbud went from a 9-percent charge all the way to 30 percent after five minutes in the charging case. After another ten minutes, the earbud’s charge was at 50 percent, and after another 20 minutes, it had a 70-percent charge. In other words, I went from zero to 70 percent in roughly 35 minutes.

The CX Plus’s active noise cancellation is adequate for a true wireless headphone, but not great. I performed my testing in a variety of noisy environments, including a reproduction of airplane cabin noise that jacked up to 95dB when measured on an SPL. Comparatively speaking, the CX Plus’s ANC performance was very similar to the B&W PI7, which I thought was merely average. Head-to-head with the AirPods Pro, the Apple earbuds did a better job of filtering out midband engine noise than the CX Plus.

“Transparent Hearing” is a nice marketing term, but again, it’s only functional, not market-leading, and it doesn’t come close to the transparency magic of Apple’s AirPods Pro. In more quiet environments, I distinctly noticed that the Sennheiser earbuds had hissing-style artifacts, while vocals were a bit muted. Practically speaking, the feature works perfectly fine for tuning into announcements or conversations, which is how most consumers will use the feature. To that end, the mobile app gives you the option of pausing music or keeping it playing when you engage transparency mode.

While mobile apps have become staple features with true wireless headphones, Sennheiser’s mobile app is among the few that stand out from the crowd. The app gave me granular control over several headphone features, such as smart pause, auto-accept call, and power-off timings. The app even gave me the ability to turn off potentially annoying features, such as voice prompts.

There are three app settings that I found especially useful. First, I was able to custom program the touch controls of the earbuds. Want to enable Siri on one touch as opposed to three? You can do that via the app. Secondly, I loved being able to see at a glance the devices I’ve paired with the CX Plus—and the ability to toggle those connections. Finally, I also loved that the Sennheiser Mobile app showed me the current codec in use.

Unfortunately, I found the mobile app’s equalizer feature to be its Achilles’ heel. The graphical EQ curves like a DNA double helix that’s pretty to look at but utterly useless in practice. The more granular (and practical) option provides a meager three-band EQ for bass, mid, and treble. Save yourself the trouble and use your smart device’s or hi-res player’s EQ instead.

The ability for callers to clearly hear me was a consistent weak spot for the CX Plus. I therefore have a tough time recommending the CX Plus as a bulletproof pair of true wireless earbuds for a business-oriented professional or road warrior. Let me elaborate.

When I tested calls with several family and friends, each and every one of them described my voice as “slightly muffled” to “muffled” through the CX Plus. In fact, it was the person on the other end who clued me into the issue. I heard them just fine.

Twisting the earbuds to ensure that the microphones were pointing straight forward yielded better results, but never entirely got rid of the muffled audio. “Ah, that’s better” was the response when I would switch to the Apple AirPods Pro.

Listening tests: It’s all about the bass

I paired the Sennheiser CX Plus with my iPhone 12 Pro, Astell&Kern Kann, and Fiio X7 hires DAPs. The iPhone naturally uses AAC while the Astell&Kern and Fiio connected via aptX. To reiterate, if you have a hi-res DAP with aptX HD, the aptX Adaptive codec does not support aptX HD on true wireless earbuds. You’ll be left with regular aptX connections only.

The Sennheiser CX Plus delivered an overall satisfying sonic signature, especially for the price. There were some incredible strengths and I had some nitpick disappointments. Let’s start with the great: bass.

I felt that bass was far and away the strongest sonic characteristic of the CX Plus. It’s clean, controlled, and failed to exhibit any hint of unruly distortion. I’ve used Holly Cole’s “I Can See Clearly Now” to test bass lines in speakers costing five figures a pair, and the Sennheiser CX Plus’s reproduction of bass lines was spot on. The CX Plus did an outstanding job rendering the deep, pulsating bass lines on Bonnie McKee’s “Trouble,” and it had total control of the bass lines on Lorde’s “Royals,” Sade’s “Soldier of Love,” Adele’s “Send My Love (To Your New Lover),” and Holly Cole’s “Train Song.” Bass was deep, authoritative, and best of all, consistently tight. No matter the song, there wasn’t a hint of bass bloat anywhere.

Now the nitpick: The Sennheiser’s default “neutral” sound tends to de-emphasize the midrange in that key 1kHz-to-2kHz region. Vocals lacked presence at times, and had a tendency to sound veiled and slightly flat. For example, Alicia Keys’ vocals on “Fallin’” and Natalie Merchant’s “Maggie Said” were robbed of their air and dimensionality. The top end also lacked the effortless air, dimensionality, and crispness that the audiophile in me longed for. Bumping up the midrange and treble via the Sennheiser’s Smart Control mobile app couldn’t resolve the overall sonic signature to my satisfaction.

Sennheiser’s CX Plus True Wireless is about function more than form, and it’s in function that these true wireless headphones stand out as a solid value proposition.

The CX Plus combines outstanding bass, reliable wireless performance, good active noise cancellation and transparency, solid battery life, fast charging, AAC and aptX adaptive, and a functional companion app—all in a reasonably-priced package. The downers for me were the awkward case, the lackluster calling performance, a slightly veiled midrange, and an underperforming top-end, although the latter two nitpicks aren’t necessarily out of character for true wireless headphones at this price point.

If you long for better audio performance, you might want to take a look at Sennheiser’s top-of-the-line—and far more expensive—$299 Momentum True Wireless 2. But the Sennheiser CX Plus is a strong contender in the sub-$200 true wireless earbud category and deserves serious attention.