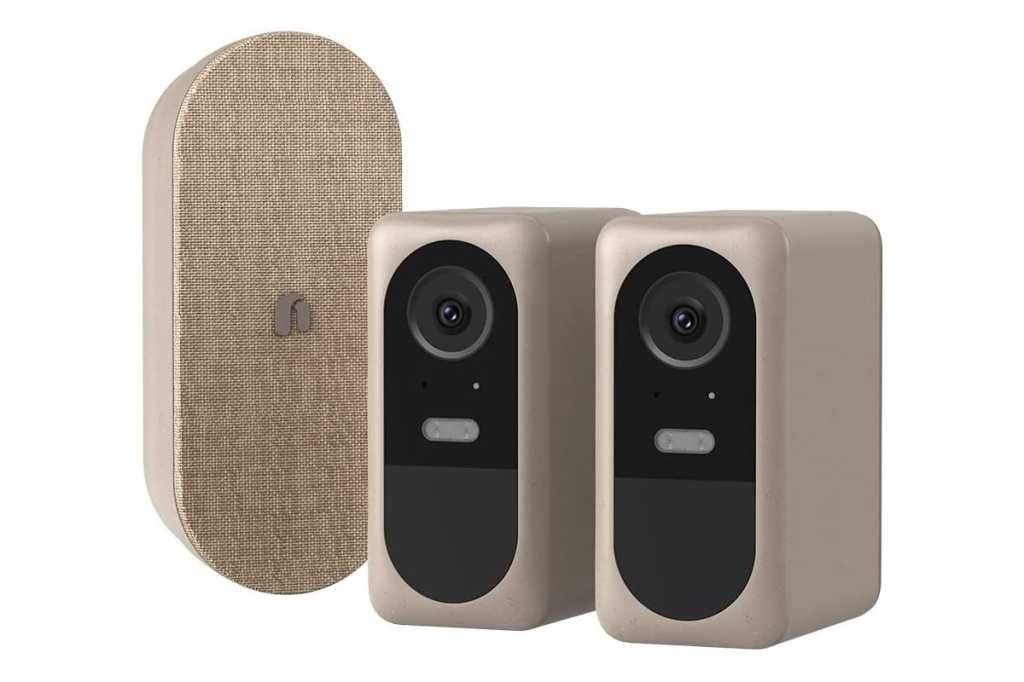 Image: Nooie
At a glance

Nooie’s battery-powered cameras are small and versatile, but we found their reliance on a base station to connect to your home network to be problematic.

Portable, battery-powered, and versatile, with great picture quality and multiple night-vision modes: The Nooie Cam Pro checks a lot of boxes when it comes to security cameras—on paper, at least. If it performed a lot better, this could be a category killer. As it stands, the Nooie Cam Pro—sold in a two-pack with a base station—feels like a work in progress.

There’s very little not to like with the Nooie Cam Pro based on its specs. The pint-sized device (at 3 x 2 x 1.5 inches) isn’t much bigger than a deck of cards, and it provides 2560 x 1440 pixels of resolution and up to 8x zoom. It’s rated IP65, meaning it’s impervious to dust and can withstand being sprayed with a garden hose, so it can be deployed indoors or out (you can read all about IP codes at the preceding link). You can power the device via a USB cable or go wireless and let the 5000mAh battery take the wheel (the camera mounts to a magnetic base, which makes it easy to aim and to take down to recharge its battery). Nooie says a full charge will last “for months.”

This review is part of TechHive’s coverage of the best security cameras, where you’ll find reviews of the competition’s offerings, plus a buyer’s guide to the features you should consider when shopping for this type of product.

The unit includes both infrared illumination and a spotlight that lets you choose between black-and-white or color night vision respectively. Two-way audio is also available, as is support for video-based Alexa and Google Home devices. About the only thing that I didn’t love after unboxing the Nooie was its color: The company calls it “nature inspired,” but I call it “brown.”

Like I said, everything seems solid until you start working with the Nooie Cam Pro in earnest. The major problem is how its wireless system is managed. Up to four Nooie cameras operate by communicating with a dedicated bridge that must remain plugged into power and nearby. The bridge, in turn, communicates with your router either via Wi-Fi (it supports both 2.4- and 5GHz networks) or ethernet. If you’re using local storage, the bridge is where the microSD card slot resides; all cameras record to the same card. Alternatively you can opt for Nooie’s cloud storage service, which offers 7 days of clips for $1/month or $10/year, 14 days for $1.90/month or $20/year, or 30 days for $3/month or $30/year. (No trial plan is offered.)

The camera-bridge-router system is often a tenuous one that doubles the risk of something going awry, which is why many manufacturers have been moved away it. In Nooie’s case, the design is problematic both for setup—which took countless tries to complete successfully—and in daily use. Here, the system showcases a frustrating performance problem: Accessing recorded clips or even making settings changes is slow as molasses while you wait for Nooie to finish buffering and navigating the hops to your router and back. As a result, recorded clip playback is often jerky and halting. After waiting several seconds for them to load, clips would often stutter, sometimes with pauses of several seconds in the middle of the feed. I often found I had to wait up to 45 seconds for the live feed to load, and sometimes it never loaded at all, forcing me to try again. Strangely, I found that moving the camera further from the bridge was helpful at improving performance, but this takes a considerable amount of trial and error to be of much help. Even with hardware relocation, I was never able to fully improve the situation.

Other problems with the Nooie infrastructure are baked into its design. The biggest is that clips are limited to 20 seconds in length—with roughly a one-minute cooldown between successive recordings. This will be far too insufficient for many users. Nooie’s app is fairly easy to navigate (though prone to spitting out occasional fits of Chinese when something goes wrong), but again its responsiveness is problematic, as it suffers from the same lag issues as watching recorded clips. Clips appear on a daily timeline, each bearing a time stamp, but the system does not provide thumbnails for the clips, which will leave you guessing (and wasting a lot of time) if you’re trying to separate a family member from a porch pirate. I found Nooie’s motion detection to be only so-so (it can also be set to filter based on “human shapes” to help weed out animals, which it does with modest success), but occasionally I found the camera recorded when nothing was moving at all. On the plus side, notifications are delivered promptly if the app is set to send them.

While daytime image quality is superb, Nooie’s night vision is fair but not great, in both IR and spotlight modes. IR range is limited to about 12 to 15 feet before things get too dark to discern; the small spotlight offers roughly a similar range. The Nooie cam also has a very bright status light on the front of the camera that turns on when it’s active; this can’t be disabled short of taping over it. Finally, you’ll need to use Nooie’s included microUSB cable to charge the device; the port on the camera is recessed within a narrow depression that blocked a generic cable from being able to fully connect.

Overall, Nooie’s limitations—most of which are self-inflicted—make for a camera that’s simply too restrictive to be all that useful. $300 gets you a pair of cameras, a base station, various accessories, and a “Protected by Nooie” sticker. Stickers are always a nice touch, though given what we know about the camera’s limitations, I’m not sure who this one will be scaring off.