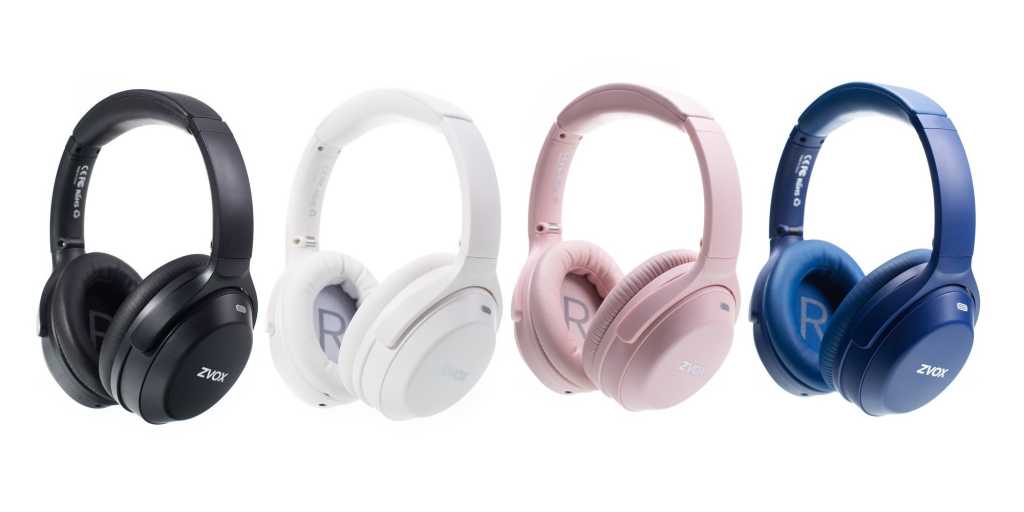 Image: Zvox
At a glance

We like these affordable headphones for normal listening, and find them more comfortable than most. Bass levels, however, drop when you engage the ANC.

There’s the old adage that you get what you pay for. With the comfy Zvox Model AV52, which sound good for the price, you might just get a bit more than you pay for, provided you’re willing to live with a major peccadillo: active noise cancellation (ANC) that’s slow to engage and that alters the EQ quite a bit when it does.

The sound with ANC is engaged is more than adequate, but with considerably less bass and an annoying jump in volume.

The AV52 I tested were black, but they’re also available in rose, white, and blue. They arrive in a handy carrying case, shown below, and Zvox provides both a USB-A to USB-C charging cable and a TRS (Tip/Ring/Sleeve) 3.5mm cable for wired use.

The controls (volume-up/next-track, volume-down/previous-track, power/pair/voice assistant on the right-hand ear cup, and the ANC toggle button on the left) appear a bit cheap at first, but they’re extremely easy to locate and operate by touch operate. I’ll take efficiency over style and appearance any day. Next to the joystick on Marshall’s headphones, the Zvox AV52’s controls are my favorites. Good job Zvox.

There are also tiny indicator lights for the ANC status and power, with the latter doubling as Bluetooth status. There’s also a USB-C port for charging, and twin mics to handle phone calls as well as Google/Apple voice commands. No doubt at least one is employed for the ANC, though hard specs weren’t available on Zvox’s website or forthcoming from the manufacturer by our deadline.

The AV52’s headband (shown above), articulates just above the cup. In other words, they fold to fit in the case. There’s more than sufficient padding on the cups and the headband, and even a little over the speaker grills. Despite the firm fit, I found them more comfortable than most.

The AV52’s aren’t the best-sounding headphones I’ve tested, but listening to my batch of test songs without ANC engaged was more than pleasant. There’s plenty of bass, and the overall sound is certainly acceptable, though definition in the mid- and upper-frequencies isn’t as sharp as it could be. Volume is adequate, but if you’re looking for blasters, don’t buy these.

The issues start when you engage ANC. You can hear the AV52 switching modes, and it takes about a second for the ANC to fully engage. When it kicks in, there’s a large jump in volume, as the processor doesn’t seem to compensate for the increased strength of the combined signals. (ANC uses two phase-opposite signals to cancel noise.)

Timbre also changes, with a drop in perceived bass as well as a slightly thinner lower mid-range. I wouldn’t call the AV52 in ANC mode unlistenable, but I liked the fuller non-ANC signal a lot better.

To be fair, Zvox’s ANC does substantially reduce ambient noise (especially in the lower registers). Zvox’s AccuVoice boosts frequencies where voices reside; perhaps the designer assume that you’ll be watching movies on a plane when the ANC is engaged and want more distinct dialog. Perhaps, but the the choice shouldn’t be made for you. Whatever the case may be, I’d call the AV52’s ANC livable, not optimal.

On the other hand, the AV52’s excellent fit blocks out so much ambient sound, you might find ANC to be largely unnecessary. That means you can have your bass if you want it, at the cost of only a bit more noise. Battery life is good, too; I was at 12 hours and counting (sans ANC) with the battery still registering 40 percent remaining.

For the price, the Model AV52 sounds good. Not great, but then you’re paying just $70. The ANC is workable, if not ideal for music. I’d call them a nice travel option when you don’t want to risk your expensive headset.