It doesn’t make beer on demand, but the Zymatic does remove friction from home brewing by grabbing recipes online, and automating complex steps.

Every time I told someone I was testing the PicoBrew Zymatic, a countertop appliance that simplifies beer brewing much like a bread machine simplifies baking, I heard a variation of the following question: “So you basically dump in a bunch of ingredients, push a button, and then tap your beer, right?”

Oh, if it were only that simple.

The Zymatic is not like an espresso machine or Sodastream for beer, so if you’re looking for instant gratification (let alone an instant buzz), just buy a six-pack instead. Beer brewing is typically a two- to three-week operation that involves big pots and buckets, precision temperature control, and strict respect for sanitization and other best practices. The Zymatic streamlines much of this rigmarole, but it’s not a miracle worker, so you’ll still need to wait quite a while for your beer.

Nonetheless, based on everything I learned during my first-ever beer-brewing experience, the Zymatic definitely eliminates much of the friction of traditional home brewing. The machine downloads recipes from the cloud, and uses a computer-driven workflow to execute many of the complex brewing steps that novices like myself are prone to botch.

To this extent, the Zymatic is like a bread-making machine—insomuch beer is sort of like liquid bread, and making bread can be a total pain in the ass as well.

Using the Zymatic, I was able to prepare my wort, the essential liquid ingredient from which all beer is brewed, in just a few hours. Despite oftentimes vague documentation, the process was certainly easier than backyard brewing, and the resulting ale, which my friends and I drank some 11 days later, tasted surprisingly good. The first few pints from my keg received middling reviews, but by the time we pulled the fifth or sixth pint, my brew tasted like a respectable commercial pale ale (though it looked cloudy, and would have benefited from maturing for at least another week)

And you know what? It had better taste good. The machine—which borrows its name from zymurgy, the branch of science that focuses on fermentation—costs a whopping $2,000 on Amazon.

The messy whys and hows of home brewing

If you want to see a step-by-step breakdown of exactly how I made my first batch of beer, please watch the video at the top of this article. But for now, I’ll just explain the basics of how PicoBrew’s Zymatic operates—and how it simplifies some of the tasks that scare newbies away from home brewing.

In a traditional home brewing set-up, you begin making your wort by “mashing” the grain: You basically steep malted barley in hot water within a very specific temperature range, converting the grain’s starches into sugars (which will later be converted into alcohol via the addition of yeast). Some beer recipes require multiple mashing stages, with each stage steeping at a different temperature for a different length of time. See? It’s already getting complicated. Better grab a thermometer and timer.

Next up, it’s time to “lauter” and “sparge,” separating your wort from all the spent grain, and then adding water to extract even more fermentable sugars. I’ll spare you the details, but know that this requires specialized equipment and legitimate know-how.

Finally, it’s time for your “boil,” which involves transferring your wort back to your mashing pot, and putting it above a flame. Besides sterilizing the wort, this is the brewing phase in which you introduce different types of hops at different points in the boil. Again, timing is key.

So, yeah, it’s a finicky operation. It creates a bit of a mess, and requires legitimate brewing knowledge and one’s full attention.

Enter the Zymatic, which automates everything I just described. 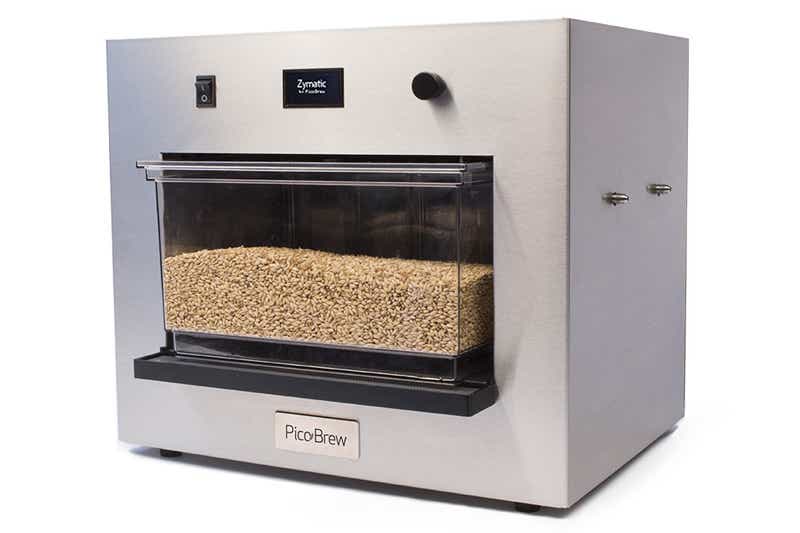 How the Zymatic simplifies home brewing

You start by connecting the Zymatic to the Internet, either via Wi-Fi or ethernet. Next you sync a recipe from PicoBrew’s online library with the machine. In effect, the recipe tells the machine what temperatures it should reach during the mash and boil cycles of the specific beer you’re about to make.

Next you connect the machine to a 5-gallon Cornelius keg (it’s included with the $2,000 purchase). You pour 3.5 gallons of high-quality tap water into the keg, and then place your recipe’s grain and hops in their respective filtering bins. There’s one big bin for grain, and four separate smaller bins for hops. PicoBrew sells pre-packaged ingredient kits (I used its Pico Pale Ale kit), but you can also purchase grain and hops from a beer supply store, and weigh out the ingredients yourself.

With all the ingredients loaded, it’s time to hit the start button. The Zymatic and keg essentially form a closed-circuit loop: Water from the keg is sucked into the machine, heated to a precise temperature (152 degrees Fahrenheit), and then circulated through the grain bin for 90 minutes to extract sugars. (As best as I could tell, the lautering and sparging phases are rendered moot by PicoBrew’s recirculating mashing method.)

After mashing, the wort enters its boil phase, and the circulating liquid begins cycling through the hop cages. PicoBrew describes this as a “cascading motion” that “mimics manually adding hops to a boil pot.” The timing of the hops infusion is controlled by the recipe you’ve uploaded, and it’s all very precise. According to the data recorded during my brewing session, my first hops cage began infusion precisely when the wort temperature hit 206 degrees Fahrenheit. The second cage joined the party 45 minutes later, and the wort passed through the third and fourth cages at the 50- and 55-minute marks.

After the boil, the fully brewed wort cycles back through the tubing into the keg for cool down (I couldn’t add my specific fermenting yeast until the wort cooled down to 70 degrees). My wort suffered a frightening but ultimately harmless mishap during this cooling stage (more about this soon), but the brew finally cooled down many hours later

And that signaled the end of PicoBrew’s beer-making act.

Indeed, by the time you’re adding yeast, you’re done with the Zymatic entirely, and the machine doesn’t add any more efficiencies to the beer-making process. Nonetheless, from cool-down to carbonation, home brewing was still a complete mystery to me, and better documentation on PicoBrew’s part would have been welcome.

Picobrew’s $2,000 price tag is a big gulp to swallow, especially because the system only produces 2.5 gallons of finished beer—that’s just 20 pints (one gallon of water is lost to the brewing process itself). But the machine’s high price is even more glaring once you discover the roughness of the instructional materials. The documentation is piecemeal and vague. It feels like it went straight from the developer’s computer to the hands of the consumer without thorough vetting by a user experience expert.

Throughout my brewing project, I found myself consulting the spiral-bound user manual that came with the machine, a stapled recipe sheet that came with my ingredients kit, and documentation and videos on the PicoBrew website. Piecing everything together, I was able to make my beer, but still hit rough patches. Just a few examples:

Overall, the user manual would benefit from much more detailed step-by-step instructions. It needs inline images directly linked to specific blocks of text, and highlighted call-outs—for instance, a “WARNING!” call-out that explains what to do if your keg begins foaming during cool-down. I would also have more confidence in the user manual if it didn’t look like it was assembled at Staples.

The hardware would benefit from some refinement as well. Specifically, I’d like to see a full-fledged touchscreen display instead a barebones LED display that’s navigated with a dial. The tiny LED makes menu navigation really wonky, and suggests a maker project, not a fully baked retail appliance. The whole experience feels vaguely beta, and lacks the level of panache we find in so many other smart-home appliances—like, say, Dropcam or the Nest thermostat.

Good-tasting (if not lovingly crafted) beer

I think experienced home brewers would be less confused by the PicoBrew’s documentation than I: For example, they might intuitively know where to put the Irish Moss, and how to avoid the cool-down foam. But these are also the people who might take issue with what the Zymatic stands for.

Indeed, some hardcore craft brew enthusiasts might consider the Zymatic to be “cheating”—a high-tech shortcut for a time-honored process that’s supposed to require skill, knowledge, and a bit of gut-it-out moxie. To yestertech purists, it’s the sterile smartwatch to the spring-driven mechanical watch. It’s the soulless electric motor to the hand-tuned carbureted engine.

But I don’t harbor the same lofty ideals (at least not for beer brewing). Despite all its drawbacks—the price, the spotty instructions, the 20-pint production limit—I feel the Zymatic really does make home brewing much more accessible. Besides automating the brewing operations that require the most hands-on attention, the Zymatic’s parts are small and can be cleaned in a dishwasher. And because the machine and its attached keg combine to form a closed system that’s sanitized during the boil, the risk of contamination by wild yeast is significantly reduced. (Or so says PicoBrew.)

All of this appeals to me. I’m looking for ease-of-use and results, not the romance of cleaning pots or the “learning experience” of blowing batch after batch.

Then there’s the beer itself. Having tasted a number of really bad home-brewed beers during the last 20 years, I was bracing myself for poor results. But the pale ale I drew from my finishing keg was surprisingly good. It had a great balance of sweet maltiness and bitter hops, and a thick foamy head. It also had kick-ass alcohol content, if my one-beer buzz was any indication.

Transporting the fermenting keg from home to office was a big mistake, as it kicked up the yeast and trub, making for a cloudy beer. But aside from that single penalty, the ale tasted pretty good as we got further and further into the batch. (I should note that PicoBrew’s user manual advises not to disturb the fermenting keg before the beer is racked to the finishing keg. It’s a mistake I won’t make again!)

I counted 159 recipes authored by PicroBew in its online library, and some 100 other recipes submitted by community members. Most have multiple hop-infusion stages, and some have different mashing stages, where mash temperatures increase at specific times in the 90-minute mashing cycle. For these more complex recipes, the Zymatic would seem to provide extra-special benefit, automating the processes that require the most attention.

PicoBrew likes to evangelize that the Zymatic can be used by professional craft brewers as a platform for quickly developing new recipes. The machine’s data logs identify wort temperature across every single minute of the brewing process, making it easy to graph temperature increases against time, and tweak recipes accordingly.

But do regular-old consumers like me really need this level of reporting? Most definitely not. Nonetheless, the machine promises to deliver consistent results, and eliminate much of the pain and suffering for beginning brewmasters (in turn letting them focus on exploring new recipes). The Zymatic definitely isn’t a back-to-basic, romantic beer-making tool, but convenience alone might be worth the $2,000 buy-in for some.

And once PicoBrew overhauls its documentation—an easy fix—it will push the Zymatic one step closer to that set-it-and-forget-it beer-brewing promise.

Jon has been covering all manner of consumer hardware since 1995. He brought the Bitchin'fast!3D2000 to market in 1999, and has ran MaximumPC, Mac|Life, Mobile, Greenbot and Macworld, among other consumer tech magazines and websites.