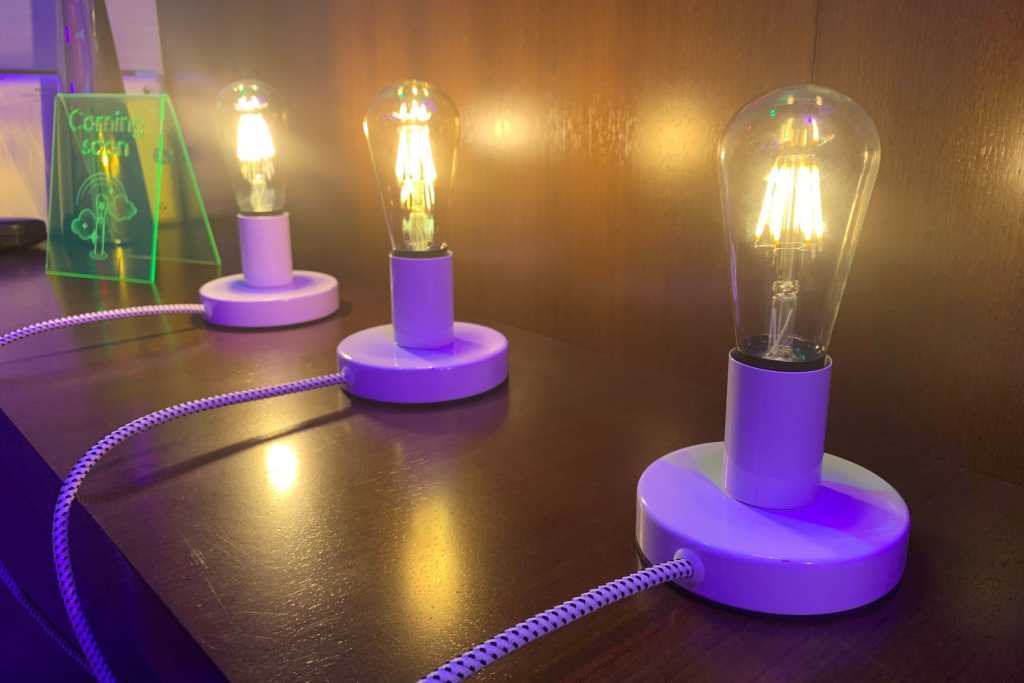 Smart lighting manufacturer LIFX is set to bolster its Wi-Fi bulb lineup at CES this week, announcing new filament and candle bulbs along with a four-gang smart switch. Also on tap: a major redesign of LIFX’s mobile app.

First up is LIFX’s new Edison-style ST64 teardrop bulb, which comes with linear LED filaments and arrives in smokey, amber, and clear glass versions. The dimmable warm-white bulb will be followed up by a G95 filament bulb, according to LIFX.

Like the rest of its Wi-Fi bulb lineup, the ST64 teardrop filament bulb is compatible with Alexa, Google Assistant, and HomeKit, and it can be controlled without a hub. The new filament bulb is slated to arrive this spring for $40.

Next comes a four-gang switch that’s capable of controlling both smart and “dumb” lights.

The four LED-backlit buttons on the LIFX Switch (first announced, although not physically shown, at the IFA technology show in Berlin last fall) aren’t just for turning lights on and off. Indeed, the buttons will also let you activate lighting scenes, change bulb colors, and adjust brightness.

Because the Alexa-,  Google Assistant-, and HomeKit-compatible LIFX Switch can control both smart and unconnected lights, you can add a “dumb” light to one of your LIFX lighting scenes. Look for the LIFX Switch to go on sale this spring for $120 ($100 if your pre-order).

LIFX is also showing off a tunable-white version of its existing LIFX Candle Color. Like the color version of LIFX’s candle bulb, the new LIFX Candle White to Warm can be controlled via Alexa, Google Assistant, or HomeKit, and you can tune it from cool white (6,500K) all the way to a very warm white (2,200K). The White to Warm candle bulb is due to arrive in the spring for $30.

Also on tap is a new gaming-focused bias lighting LED strip with corner connectors, handy for affixing the strip around the edges of your TV.

A follow-up to the existing LIFX Z TV kit (which comes in a single one-meter strip), the new Z TV 360˚ kit can accomedate TV screens up to 75 inches. You can use the LIFX mobile app to dial up animated color presets, or you can even “paint” colors onto the strip using the LIFX mobile interface. The Z TV 360˚ will cost $100 when it goes on sale this spring.

Last but not least, the LIFX mobile app is getting a complete makeover. The revamped “App 4,” I’m told, boasts a much more visual look that’s designed to make it much easier to quickly change the lighting scene in a room, or even tweak the color and brightness of an individual bulb.

A new tabbed design allows you to control lighting groups directly from the dashboard, while a new “Scenes & Effects” screen gives you one-touch access to your saved actions, scenes, and favorites. There’s also a new Schedules screen lets you create and manage your lighting schedules and routines.

The new LIFX app should begin slowly rolling out next Tuesday, a LIFX rep said.