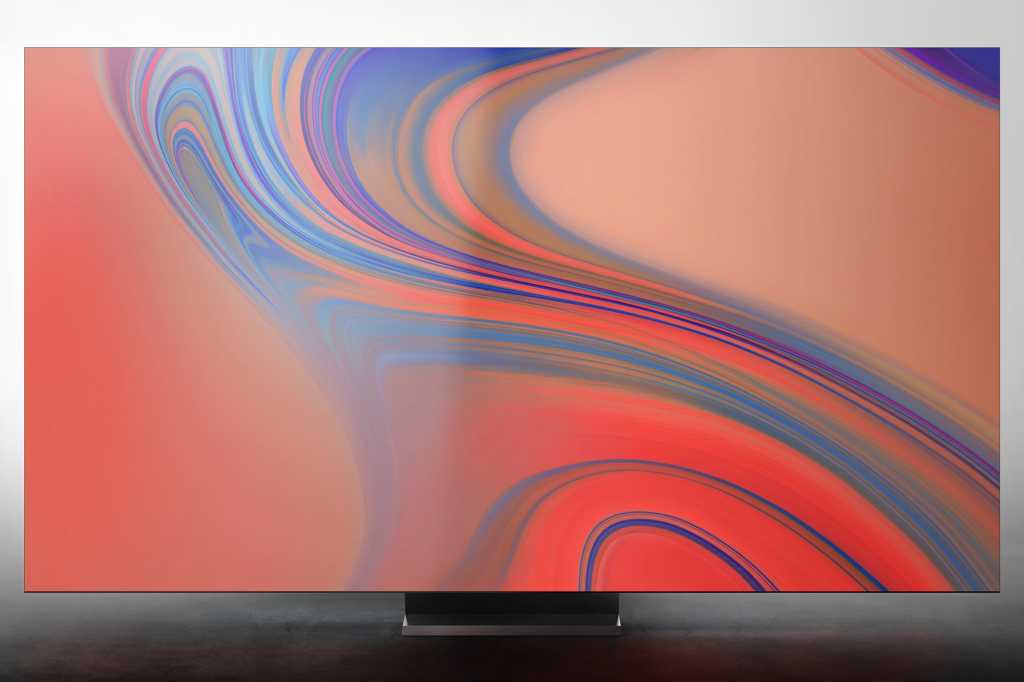 The news from Samsung at CES 2020 is more evolutionary than revolutionary; but since Samsung is farther along the research and development path than nearly all of its competitors, that’s okay. At least for now.

Samsung’s Q950TSA is distinct upgrade from last year’s Q900 8K UHD TV, which was already viewed as one of, if not the best LED-backlit LCD TV on the market. This year’s design features a nearly bezel-less frame, with the same iMac-like pedestal stand, but it adds exposed, backfiring speakers that should improve sound greatly.

Though specs weren’t immediately available, from the image below, it also appears to be thinner. As with other Samsung high-end TVs, the vast majority of the electronics are in a One Connect breakout box that attaches to the TV via a single thin cable.

Samsung says it has improved the curated streaming content on offer, and that the Q950 offers even better 2K and 4K upscaling. Samsung also touted its upcoming Samsung Health app that allows you to “accomplish your health and wellness goals at home, on the biggest screen in your home and on your own schedule.” That’s nice, but may we humbly suggest that getting outside is a surer route to health and wellness.

The Frame and The Wall

The Frame TVs have been improved in small ways and will now be available in 32- and 75-inch sizes. Also new are beige and burgundy bezels, along with accessories such as the No-Gap Wall Mount and One Invisible Connection, turning the Frame into a truly elegant decorative piece. Samsung says that improved sensors on the bottom will more accurately adjust brightness to better suit the ambient light conditions. Art Mode 3.0’s auto curation gives you recommendations based on your specific tastes from the more than 1,200 artwork options available via a paid subscription for the Samsung Art Store.

Micro-LED news includes the addition of 88-, 93-,110-, and 150-inch models; plus, a gargantuan 292-inch SKU in Samsung’s The Wall lineup. These join the previously available 75-,146-, and 219-inch models already available. If you’re not familiar with the technology, you could think of micro-LED as a non-organic OLED display. Both are self-emitting pixel technology, but becase building micro-LED displays remains a very inefficient process, they also remain prohibitively expensive and modular. Multiple panels are put together to make larger displays, so they can also be used in non-rectangular configurations. It’s spectacular, but remains well beyond the means of the average consumer.

Note that micro-LED tech should not to be confused with TCL’s mini-LED tech. The latter is not a display but a methodology for building a backlighting array.