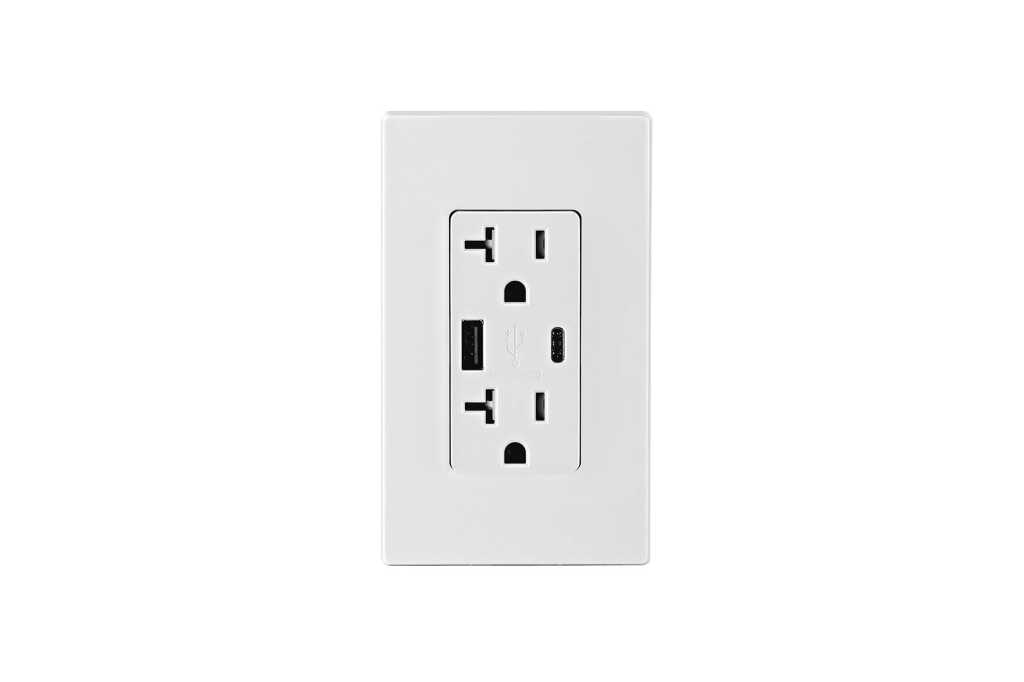 Anyone who hates wall warts will appreciate this outlet’s built-in USB charging ports. Just be aware that oversized electrical plugs can block one or both.

Leviton’s Type A & Type C USB Charger Outlet isn’t smart—it doesn’t connect to your Wi-Fi network, and it doesn’t have a Zigbee, Z-Wave, or Bluetooth radio onboard—but it will charge one or two smartphones, tablets, or other devices without need of a power adapter. It has a USB Type-A charging port on one side, and a USB-C charging port on the other, so you plug those types of cables directly into it.

The duplex outlet makes a total of 5.1 amps available to its USB ports (up to 2.4 amps at 5 volts to the Type-A port, and a maximum of 3 amps at 5 volts to the USB-C port), enabling quick charging on the USB-C side with devices that support that technology. Leviton also manufactures a version of this outlet with dual USB-C ports with full support of USB Power Delivery (look for Leviton’s model T5635).

The outlet reviewed here is available in two configurations: If you’re replacing an outlet in a bedroom or living room, the Leviton model T5633 (about $36 on Amazon) is rated for use on 15-amp circuits. I wanted to eliminate wall warts in my kitchen, so I asked Leviton to send its model T5833, which is rated for 20-amp circuits. It costs about $42 at Leviton’s online store. Leviton’s model T5635, meanwhile, is available only in a 15-amp SKU. It costs about the same as the other 15-amp outlet.

Apart from the USB ports, the outlet looks no different than any other once it’s installed in the wall, but it’s more than twice as deep as the outlet I replaced. You can side-wire the outlet if there are just two wires (plus ground) coming out of the wall, but I had to back-wire this one because there were four wires in the box where I chose to install it. The outlet I replaced had its hot and neutral wire terminals on opposite sides of the outlet, but Leviton stacks the terminals on the left side of the outlet. The combination of the outlet’s 1.75-inch depth and having all four wires, plus the ground wire, all on the left made stuffing the device back into the box a bit of a challenge.

Once I’d secured the outlet in the box, mounted the cover plate, and turned the relevant circuit breaker back on, I was happy to see my Pixel 2 XL display its “charging rapidly” message when I plugged in a USB-C cable. I plugged in an older iPad mini and confirmed that it was charging at the same time. Peachy-keen, right?

Well, all was right with the world until I decided to plug in an APC G50B surge protector. Being a nine-outlet, 20-amp power conditioner, this device has a hefty power cord and plug. The cord emerges from its plug at an oblique angle, so it won’t not block the adjacent outlet, but the oversized plug did block the USB-C charging port on the right-hand side of Leviton’s outlet. I was able to squeeze a USB Type-A cable on the left-hand side, so all was not lost, but it’s still a bummer that I couldn’t make full use of the outlet’s feature set.

Whether you encounter the same problem will depend on what you plug into the electrical outlets. More typical two- or three-prong plugs with thinner cords shouldn’t be a problem, but the thick cords that high-quality multi-outlet surge protectors utilize almost certainly will. Even though I can’t use both USB charging ports, I appreciate that Leviton thought to build a 20-amp version that I can use in my kitchen.