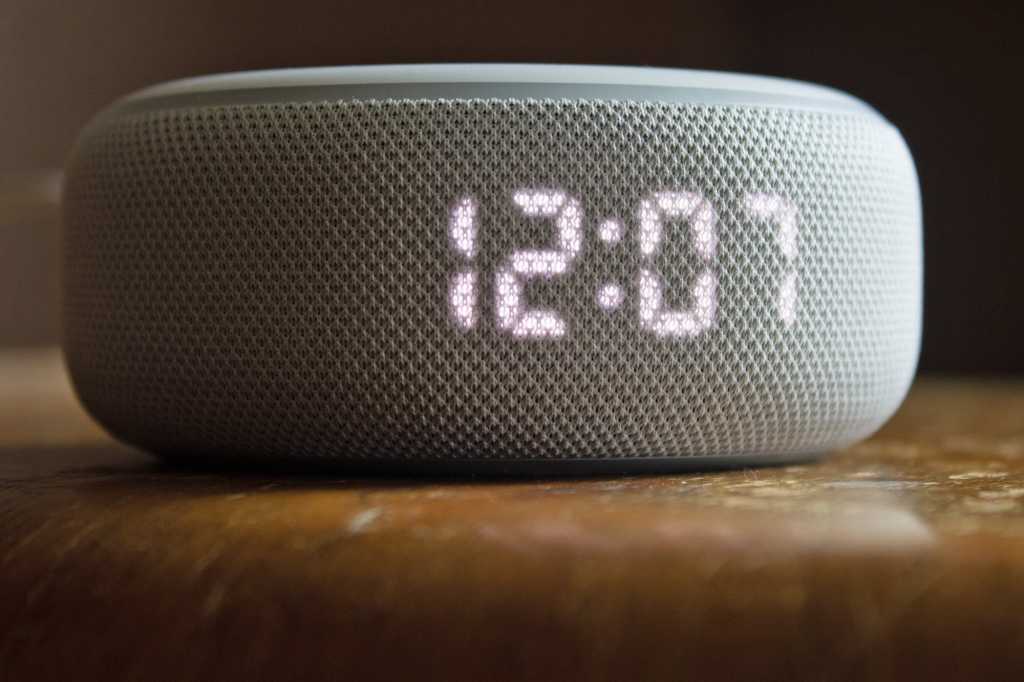 Is a clock worthy of a $10 bump in price compared to the third-gen Echo Dot without a display? Absolutely.

The Echo Dot with Clock is the very same third-generation device as the Echo Dot, but with one feature added: a simple LED display beneath the cloth band encircling the device that does almost nothing more than display the current time. After living with one for a couple of weeks, I can honestly say that addition easily makes it worth $10 more than the regular Echo Dot.

The Echo Dot with Clock’s display will also show the current outdoor temperature, and if you set a timer, it will flash a countdown. Those features are helpful, too, but they must be initiated with vocal commands (e.g., “Alexa, what’s the temperature?”), so they aren’t nearly as useful. Given that the most frequent question users ask Alexa is, “What time is it?” it’s a wonder that Amazon’s Echo product managers didn’t think of this earlier—and that their counterparts at Google didn’t beat them to the punch when they designed the Nest Mini.

This review is part of TechHive’s coverage of the best smart speakers. Click that link to read reviews of competing products, along with a buyer’s guide to the features you should consider when shopping.

In terms of being a high-quality music speaker, the Echo Dot with Clock comes no closer than anything else in Amazon’s arsenal—save perhaps for the Echo Studio, which I’ll be reviewing next; in fact, the Nest Mini delivers a superior sonic performance. The Echo Dot with Clock delivers decent bass response for its size, but a comparatively muddy midrange makes it difficult to distinguish one instrument from another.

But you don’t need to rely on the Echo itself for audio reproduction: You can pair it with an outboard Bluetooth speaker, or you can plug in any self-powered loudspeaker that has a 3.5mm analog aux input. Bass lovers, meanwhile, can pair one or two of these speakers (for stereo) with the Echo Sub for very good bass response. In terms of music, you won’t find those last two features on the Nest Mini, but that smart speaker’s capacitive touch pause button is vastly superior to yelling “Alexa, pause!”

This smart speaker is very easy to set up, especially if you already have other Echo devices in your home, since the Alexa app will remember your Wi-Fi credentials—you can just pick the one you want to connect to from a list. There’s a dual-band Wi-Fi adapter onboard, so you can connect it to either a 2.4GHz or 5GHz network.

You also have the option of creating a multi-room audio system with other Echo speakers, Echo Show smart displays, or Echo-compatible speakers, including Sonos smart speakers (the Sonos One, Sonos Beam soundbar, and the Sonos Move portable speaker), and the Polk Audio Command Bar.

Using the Echo Dot with Clock

Aside from the LED display, every component inside the Echo Dot with Clock is identical to the third-gen Echo Dot, so the user experience is exactly the same. It’s still not as pretty as the Nest Mini, but its physical buttons—apart from the absence of one to pause music playback—are easier to use.

Better than the Echo Dot?

If you already have a clock in the room where you intend to deploy an Echo smart speaker, there’s no significant advantage to be gained by spending an extra $10 to buy the Echo Dot with Clock—unless you find the temperature, timer countdown, and volume setting displays indispensable.

But if you’re putting it in a bedroom or any room that doesn’t have a clock, that display is clearly worth the extra 10-spot. I installed mine in my home theater, and I really like not having to interrupt a movie to check the time when I’m not wearing my wristwatch.

But it looks as though the masses don’t agree with my assessment. When I looked at the Amazon Best Seller list for electronics, which gets updated hourly, different colors of the plain Echo Dot (3rd Gen) held the number 1 (charcoal), 3 (heather gray), 4 (sandstone), and 13 (plum) spots. The Echo Dot with Clock (sandstone) was listed way down at position 35. C’est la vie.