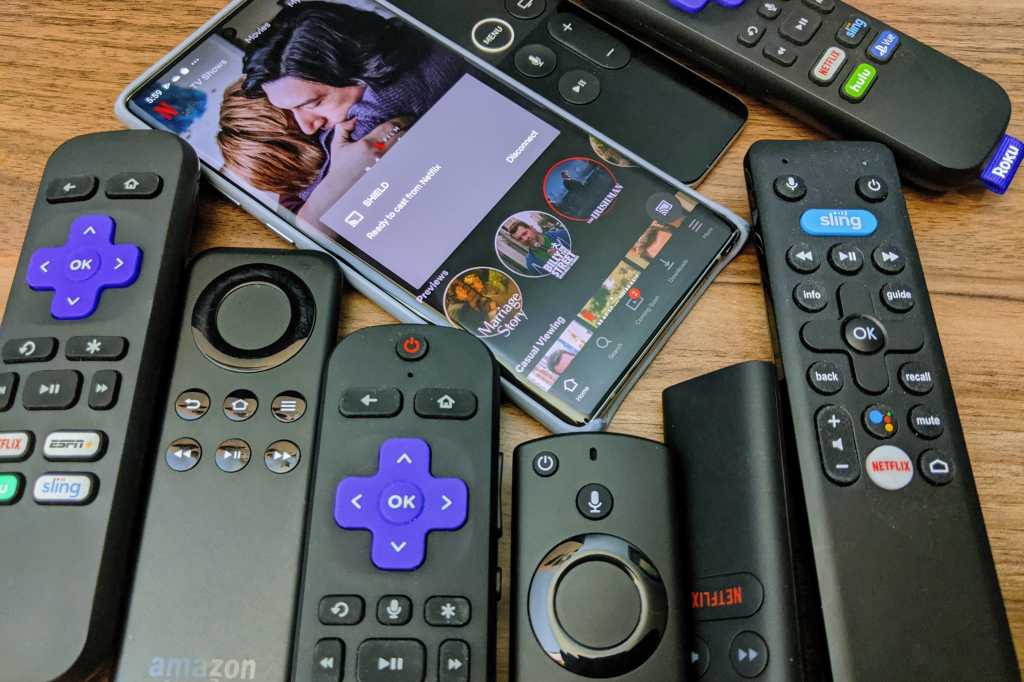 Remote controls are the most underappreciated aspect of streaming media players.

While other features such as software, speed, and video format support might seem to matter more, the remote is the what you ultimately interact with the most. Like the bun on a hamburger, it can make or break the entire experience.

Even so, media streaming device makers such as Roku, Amazon, and Apple have little agreement on what the ideal remote should be. Unshackled by the conventions of cable TV, streaming remotes are a blank slate that device makers have built on with varying degrees of success.

Having reviewed pretty much every major streaming device that’s come out over the past few years, I have some opinions on this matter. Consider this a connoisseur’s guide to the media streaming remote landscape, ranked from worst to best:

The only thing worse than a bad remote is no remote. In fairness, Chromecast’s big idea of using your phone or tablet to launch videos on the television is pretty neat, but it’s better as a supplement than as the main way to control your television, especially since you still need to reach for a real remote to control your TV’s volume and power.

In the United States, Amazon has phased out its first-generation Fire TV Stick remote in favor of one with Alexa controls and dedicated TV volume and power buttons. Some international markets aren’t so lucky. This basic remote has cheap plastic buttons, a directional pad that’s too flat, and it offers no way to control your television’s volume or power. Chromecast aside, it’s the worst of the worst.

In its zeal to hit lower price points than Amazon’s Fire TV Stick and Fire TV Stick 4K, Roku made the grave mistake of cheaping out on the remotes. Unlike other Roku players, the remotes for the $30 Express and $40 Premiere have no buttons for TV volume or power, nor do they offer voice control, and their use of IR means they sometimes fail to pick up every button press. This is akin to hand-grinding a beef patty of prime rib and brisket with a perfect 80/20 meat-to-fat ratio, only to stick it between two slices of white bread.

From afar, the Xiaomi Mi Box S remote looks fine. But when you pick it up, the plastic enclosure feels light and cheap, and the center positioning of the Android back button leads to a lot of mistaken presses. The remote doesn’t include an infrared emitter either, so the volume buttons can’t directly control the television’s output, and the “Live” button is of dubious utility given the sorry state of Android TV’s Live Channels app. Xiaomi phoned it in on this remote, much as it did on the Mi Box S itself.

In talking to readers, I know a desire exists for streaming remotes that more closely resemble what people had with cable. That means including dedicated guide and recall buttons that work with live TV streaming services. The AirTV Mini remote provides exactly that, with the caveat that its functions only work with Sling TV. Also confusing: the remote has separate voice control buttons for Google Assistant and the Sling app. While it’s not the best remote overall, it does make me wonder what Google could accomplish if it built an Android TV device with YouTube TV as the focal point.

You either love or hate the Apple TV’s trackpad based remote control, so although I fall into the former camp, I’m obligated to put it in a neutral spot on this list. Swiping around with your thumb is admittedly not great for precise input, but it’s fantastic for whizzing through menus, and it’s still the only remote that lets you fill out password fields by voice. Objectively, though, the Apple TV remote has one major flaw: Its ultra-slim design allows it to slip between the couch cushions on the regular.

For a mere $10 more than the Roku Express or Roku Premiere, you can get a vastly superior remote with either a 1080p streaming player (the $40 Express+) or a 4K player (the $50 Streaming Stick+). Both have TV volume, power, and mute controls, and they use an RF signal to communicate without line-of-sight to the streaming player.

None of this is remarkable in 2019, but Roku also gets the little things right, like comfy rubberized buttons and an easy-to-memorize design thanks to different-sized buttons in each row.

(Roku’s Streaming Stick+ Headphone Edition at Best Buy is nearly the same, but includes a headphone jack for private listening. Let’s consider it number 3.5 on this list.)

Nvidia’s new Shield TV remote is so close to streaming TV perfection. It’s the only remote on this list with backlit keys, and its programmable button can map to all kinds of functions (including a toggle for the new Shield’s impressive AI upscaling feature). The remote even has great weighting that helps reinforce the Shield’s $150 price tag.

Still, it’s just a little too slim for its own good, resulting in an unusual two-column layout that stacks playback keys vertically and leaves no room for a proper mute button. (Instead, you must map the programmable button, or master pressing the volume-up and -down keys simultaneously.) In every other way, the Shield TV tries to be a no-compromise streamer, so it’s a shame the remote doesn’t quite keep up.

The Fire TV Stick, Fire TV Stick 4K, and Fire TV Cube remotes are a rare balance of form and function. There are no clashing colors or sponsored app shortcuts here, just a common-sense layout of rubberized buttons atop a slim—but not excessively slim—plastic enclosure. Amazon knows to keep its Alexa voice button above the directional pad, away from other keys so you don’t hit it by accident, and the home button has a helpful little protrusion so you don’t confuse it with the row of playback buttons underneath. The design might be on the sterile side, but it certainly is elegant.

This is the Cadillac Escalade of remotes, with TV volume, mute, and power buttons; a headphone jack for private listening; two buttons you can program to launch any app; and a quick-replay button that jumps back several seconds (and can temporarily enable closed captioning). The Roku Ultra even has a remote-finder button, which plays a chime on the remote to help you track it down. That said, the Roku Ultra remote is so hefty that it’s hard to imagine it ever getting lost. Sure, Roku’s sponsored buttons at the bottom are tacky, but in all my years of using them, I can’t recall ever hitting one by accident.

Arguably the best feature, though, is the inch-long groove that runs along the upper part of the remote’s underside, right where your index finger should be. You don’t exactly hold the Roku Ultra remote. You embrace it, like a soft and comforting potato roll around an expertly prepared burger.