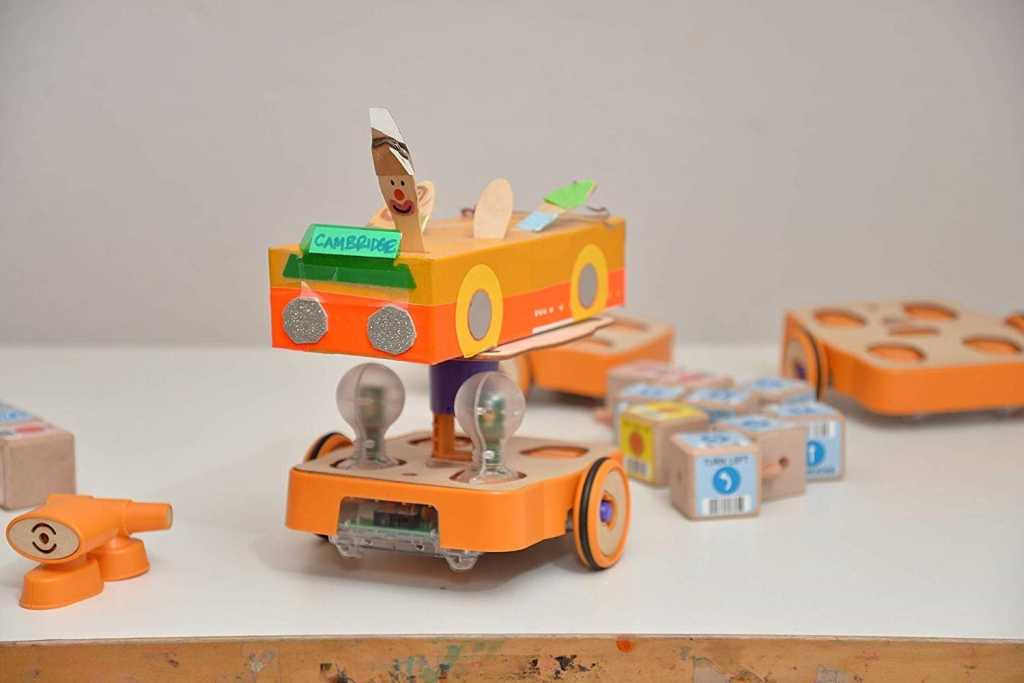 Sure, there are plenty of apps designed to teach coding to kids, but most of them involve iPads—and as any parent with little kids knows, the last thing they need is more iPad time.

Enter KinderLabs and its nifty STEAM-oriented Kibo robot kitsRemove non-product link, which use motors, sensors, modules, scanners, and (most intriguing) building blocks to introduce young ones to coding, no screens required.

My seven-year-old daughter and her friends have been coding away with a Kibo kit for a couple of months, and they’re way into it, furiously rearranging the wooden coding blocks, snapping on sound and light sensors, and (gently) tossing ping pong balls with the help of a programmable, rubber band-powered throwing arm.

Given their steep price tags, it’s no surprise that schools are the primary market for KinderLabs’s Kibo robot kits (which are available in larger sets starting at $1,230). That said, you can always start with a smaller kit and (if your kid seems interested) upgrade it with additional blocks, modules, and accessories directly from the KinderLabs Robotics site.

Getting started with coding

Coding with the Kibo programming blocks is a simple process that my daughter picked up almost immediately. At first glance, the programming blocks look just like typical wooden building blocks, except these come with multicolored labels such as “forward,” “turn right,” “spin,” “backward,” and “shake.” Each wooden block has a hole in one side and a peg on another, making it easy (and obvious) for kids to sequence the blocks in whatever way they see fit.

Once your kid has their programming blocks arranged just the way they want, she’ll need to bracket her “program” with the “Begin” and “End” blocks, then take the two-wheeled, four AA battery-powered Kibo unit (basically the main body of the robot) and scan the barcodes on the programming blocks using the built-in scanner.

The scanner beeps and an indicator light flashes green if the robot scans a block correctly; if the indicator flashes red, something went wrong with the scan (such as a misalignment of the scanning beam or a bright reflection on the glossy barcode sticker) and your kid will need to try again.

When your child is finished scanning in their program, a triangular button on the main Kibo unit will flash green, indicating that the program has been successfully loaded. Press the button, and Kibo will run the program, moving forward, back, left, right, or backward according to the sequence of programming blocks.

Of course, directions aren’t the only actions that can be programmed for the Kibo. A sound sensor that fits into one of the five sockets on the top side of the Kibo unit allows for a “wait for clap” programming block, while a “play” block triggers a microphone/speaker combo module to play back voice recordings.

Best of all (and by far the most popular option as far as my daughter and her friends were concerned), the “free throw” arm (which can toss up to two ping ping balls at once) can be activated with the “throw” programming block.

Once your child gets the hang of basic programming, they can level up with conditional programming blocks. The “if” block, for example, lets you attach Velcro-fastened cards such as “until dark” (which works with a light sensor module) or “near” (which goes with the proximity sensor), while a “repeat” block has such conditional cards as “4” (meaning “four times”) and “forever.”

If your kids want to take a break from programming, they can put decorations on the Kibo using the optional round or rectangular stages, or draw on a whiteboard that can be hung from the robot’s detachable flagpole.

In watching my daughter and her friends program and play with the Kibo kit, the biggest challenge was typically getting the scanner to work properly. Because the main Kibo unit weighs about 1.5 pounds, holding it up to scan a barcode takes a bit of effort, and the buzz of a failed scan led to a few grumbles of frustration.

But to my surprise, the kids (who, being seven, will often give up on a task the moment it becomes the tiniest bit challenging) kept at at, eventually figuring out that it was easier to scan the barcodes from the side rather than the top. They also got a kick out of debugging their Kibo programs, figuring out why their sequences or conditionals weren’t working as expected. In short, they were quite clearly engaged, with their little brains firing on all eight cylinders. (Indeed, at least one friend ended up telling his dad that he absolutely, positively wanted his own Kibo kit.)

While the KinderLabs Robotics Kibo robot kits are clearly an investment, they’re a bargain compared to cheaper but quickly abandoned coding toys that were “too boring,” or so my daughter told me. I’m also loving the fact that my kid is having too much fun with the Kibo to realize that she’s learning something. That’s a neat trick.