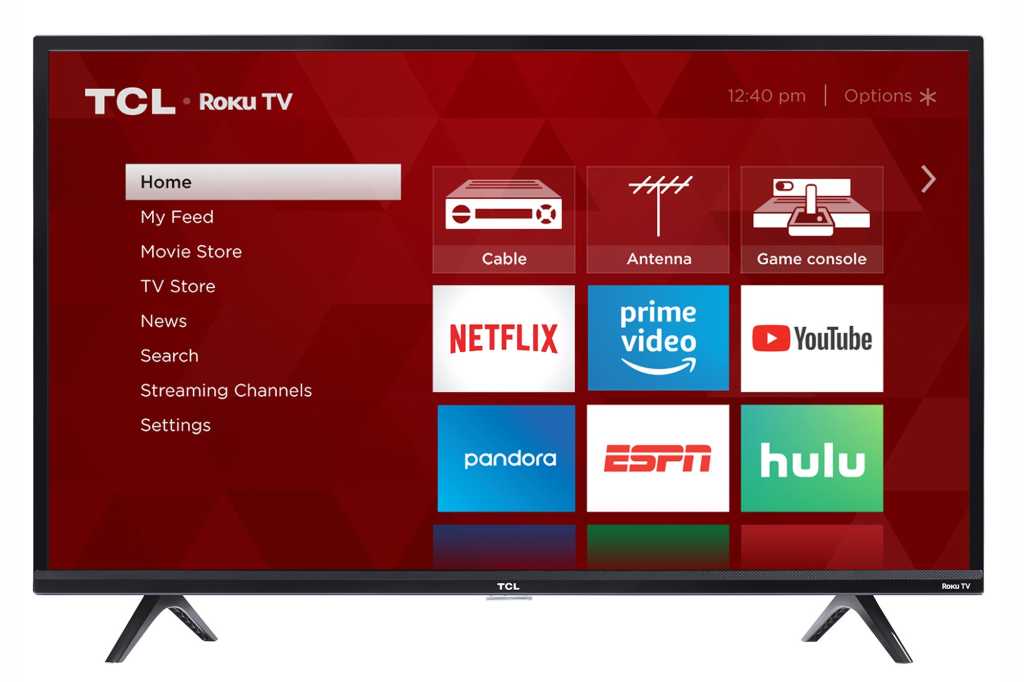 TCL has provided all the Internet and streaming smarts, plus more inputs and outputs than you might think with this 32-inch, 720p TV. The image is pedestrian, and we missed Bluetooth, but there’s no arguing the price. This is a very good TV for its class.

Anyone looking for a smaller, less-expensive TV for the kitchen, bedroom, or another room in the house where a big screen just won’t fit should take a look at this 32-incher from TCL (TCL model number 32S325).

It delivers only 720p resolution, but it provides all the Roku smart TV features and streaming bells and whiistles that TCL’s larger sets offer, and the picture is very good considering it’s based on older technology. Perhaps more importantly, as I was writing this, Amazon was selling it for for less than $130.

This review is part of TechHive’s coverage of the best smart TVs. Click that link to read reviews of competing products, along with a buyer’s guide to the features you should consider when shopping.

[ Further reading: How to choose the right TV antenna for your location ]

The port selection on the TCL 32S325 is far more generous than I expected for the price. There are three HDMI ports (1.4a, one supporting the Audio Return Channel), headphone and coax jacks, optical audio out, 3.5mm A/V (composite video and analog stereo audio), and even a USB port.

There’s 802.11n Wi-Fi, but no Bluetooth so you can’t use commonly available Bluetooth speakers and headsets. It is compatible, however, with wireless Roku speakers. You could also use the headphone/aux out to feed a discrete Bluetooth broadcast module .

There’s no mistaking the market segment when you attach the 32S325’s feet. Even marginally more expensive TVs use bolts, the 32S325’s uses screws that go into non-threaded plastic holes. But the TV is so light this makes little difference. Also, the bottom of the TV is deep and flat enough that it will stand up without the feet, though it being so light, I would use double-sided tape or some other method to secure it if I were to go that route.

The Roku TV interface one of the simplest and easiest to use in the business. The homepage is configurable, it will automatically sense attached devices, and the settings are easy to get to. Streaming aficionados will certainly like it as there’s a mountain of easily searchable content, including all the most popular channels and services. I was also impressed by how agile the interface felt overall, with little to no lag navigating between sections.

The TCL 32S325 also features an honest- to-goodness native media app that will play photos, video, and music from a USB drive. It doesn’t, however, support HEVC (h.265) or streaming from DLNA servers. For media streaming across your home network, you’ll need to install Plex from the “channels” list. I’d much prefer VLC, which is better than both DLNA and Plex in terms of format support, and doesn’t require an account or installing a server. Alas, it’s not currently available for Roku.

To use the streaming features and register the TV as a Roku device, you need to create an account and sign in to the Roku website. In fact, the TCL 32S325 wouldn’t let me log on to a local network unless it featured an internet connection. If you’re not into that kind of thing, don’t bother with Roku.

The Roku remote, despite the somewhat cheap feel and appearance, is a favorite. Like the Roku interface, it’s simple, to the point, and has a synergy with said interface that’s lacking in many TVs. Only Samsung really comes close in that regard. I also very much appreciate the transport buttons (play/pause, forward, back) that so many simpler remotes lack. There are also Netflix, Hulu, Roku, and ESPN shortcut buttons.

Before I get into the image details; watching 1080p and 720p movies on TCL’s 32S325 was a lot nicer experience than I thought it would be. There’s obviously going to be less detail than with native 1080p, but it struck me that DVD was the big leap from earlier standards. Subsequent jumps in resolution, while nice, are just icing on the cake. That opinion is open to argument.

Regardless, the TCL 32S325’s picture is middling in the grand scheme of things. It’s edge-lit without a lot of fancy zones, so its blacks lean toward gray. This effect is minimal if you view the TV at a 90-degree angle, but it becomes more noticeable if you move off-axis. The image doesn’t disappear, but the contrast drops significantly.

Color is slightly blue-skewed (cool) due to the white LED backlighting, though not as much as TVs from just a few years ago. Detail is quite good up to DVD quality and the motion is decent for a 60Hz panel, although I did notice some stutter here and there. There aren’t a lot of artifacts either—another benefit of the lower resolution with its lesser processing needs.

Sound is what I’d call adequate, without a lot of bass, but clear and loud enough for casual use. I actually like the sound better than what was emanating from a 55-inch Hisense sitting right behind it. Dolby Digital and Dolby Digital Plus are both supported, but I highly suggest you use the ARC output to something beefier if your interested in sound of that quality.

All in all, the TCL 32S325 delivers a good picture within the limits of the slightly older technologies involved. The competition at the price suffer the same issues, and quite often to a more severe degree.

It does the job

The TCL 32S325 offers all the smarts and streaming features that today’s viewers are increasingly embracing. The picture isn’t for Blu-ray junkies, but it’s certainly good enough for DVD quality, and I was struck by how much better normal broadcasts looked at their native (almost) resolution. I missed Bluetooth for my headphones, but otherwise thoroughly enjoyed my time with it.