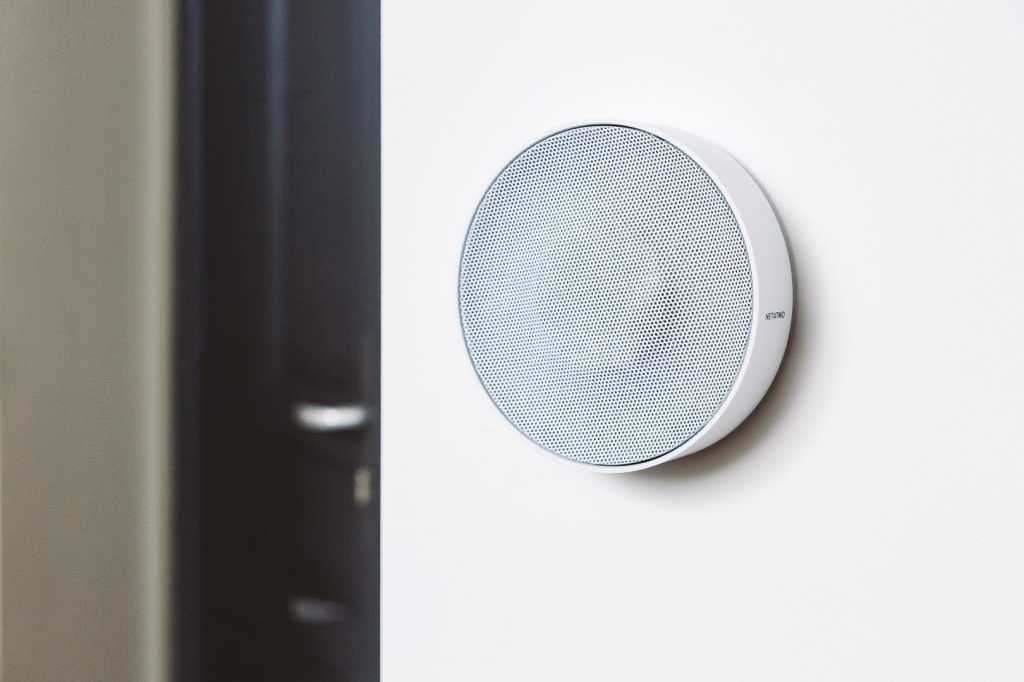 Image: Netatmo
At a Glance

The Netatmo Indoor Camera shows promise with its facial recognition and personalized security features, but the camera and its app need more work to catch up to the competition.

Netatmo has certainly taken a roundabout route to creating its smart alarm system. The company began by marketing weather station gear, then branched out by creating an indoor security camera (in a design that echoes its weather sensor). An outdoor camera/floodlight combo and door/window sensors came later, and now it’s adding a siren that’s designed to work in concert with the indoor camera and sensors.

This review is part of TechHive’s coverage of smart home systems. Click that link to read reviews of competing products, along with a buyer’s guide to the most important features you should consider when shopping.

The camera hasn’t changed—it’s still an upright tube that can detect motion and record video and audio. The concept behind the camera has always been that it can detect and identify faces, so your activity feed shows you not only when motion was detected, but whether the person doing the motion is someone who should be there at all. Netatmo’s facial recognition has never been perfect, but it’s a lot better now than it once was.

That facial recognition system is key because it’s in part how Netatmo decides whether or not the alarm should sound when someone enters a room. If a face is in your database, you can set the system to stay silent. Stranger danger? Let the alarm fly. More on this in a bit.

The second element of the kit is Netatmo’s Smart Door and Window Sensors, a three-pack of which sells for $100. Formerly named Tags, these sensors are immediately unique because they are not the traditional two-piece magnetic units that trip when the two parts are separated. Rather, they are single-piece, monolithic devices, powered by two AAA batteries. You must have the Netatmo Smart Indoor Camera to deploy the sensors; they will not function without it.

Integrated motion sensors enable them to detect when a door or window moves, and after you calibrate them, they can also tell whether a door or window that’s not in motion is open or closed. The sensors are a bit on the large side, but there’s something to be said for the ultra-simple installation that involves little more than peeling off the backing of the sensor’s sticky tape and slapping it on the door. (On the other hand, my struggle to install the batteries into these sensors was surprisingly frustrating.)

The last piece of the puzzle is the Smart Indoor Siren ($80). This is a pretty blunt device, a battery-powered disc about the size of a smoke detector that does one thing only: It makes noise when triggered by the sensors or the camera. The Siren must be paired to the camera to work (like the sensors, it won’t function without the camera), and it also must be placed in the same room, with no obstructions between the camera and the siren. This is of course fairly limiting. The blaring, 110-decibel siren’s sole additional feature is the ability—on demand—to briefly create other noises such as a barking dog or a crying baby, which is best put to use freaking out members of your household.

So that’s the kit, or rather, those are the three separate items your $380 investment gets you. Setting these things up is fairly simple, as Netatmo’s app steps you through the operation without much fuss. Things get a little more confusing once you’re actually using the system. The Netatmo app has always felt like a work in progress, and adding a full-blown security system to the mix hasn’t streamlined things.

Configuring the various settings to work with the alarm is complicated and unintuitive, and it takes a lot of trial and error to get things just right. Do you want the alarm to sound if it detects any motion? If it detects a person? If it detects a person whose face it doesn’t know? What about if a door sensor is tripped? All these options can quickly become overwhelming, namely because Netatmo doesn’t even pretend to hold your hand along this journey. You’re kind of on your own as you dig through numerous arcane settings menus.

The security features in the Netatmo app are also strangely buggy. For example, the door sensor settings menu inexplicably has two separate and identical menus for what should happen if activity is detected. I still haven’t been able to figure out if there’s a reason for the two separate menu items, or if it’s just a goof, and have taken to setting them both to make sure everything works. I also had various, cryptic API errors erupt during casual use, seemingly at random.

The other consideration with the Netatmo alarm is more conceptual. As a so-called “smart alarm system,” it’s awfully limited. There’s no physical keypad or remote control, no option for professional monitoring, no way to get a text message if an alarm is tripped, and no way to let other people into the house short of having them install Netatmo’s app themselves.

The app itself is slow to respond, as are push notifications, so when the alarm trips it can take up to 30 seconds before you can shut it off—and that’s if you have your phone at the ready. Ultimately, it’s a system that seems more at home protecting a one-bedroom apartment than a house with a lot of people coming and going.