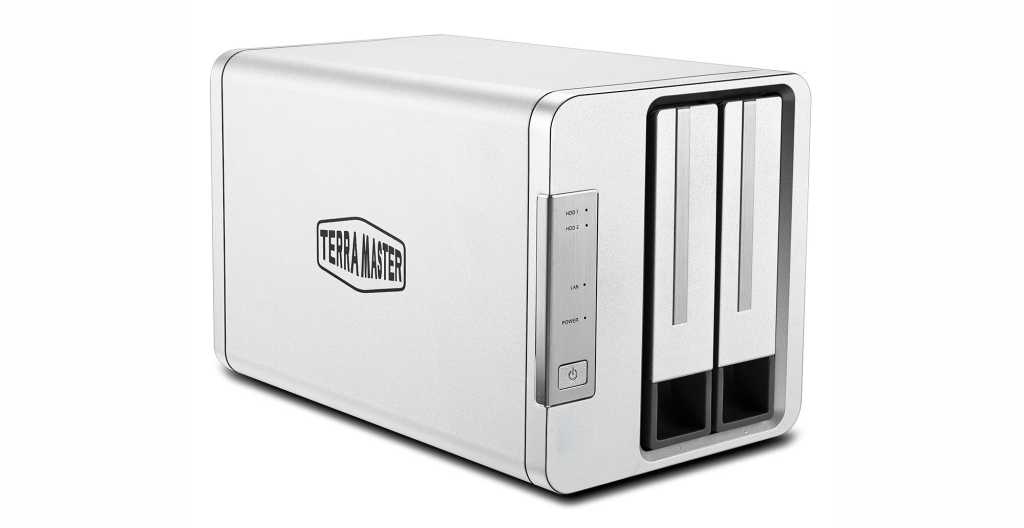 Image: TerraMaster
At a Glance

This two-bay unit isn’t the fastest writer, but it’s a great streamer and you can’t argue the price. The app ecosystem continues to grow and the HTML management interface is the quickest in the business. A great NAS box for the average user.

While its model number makes it seem like a step backward from the F2-220 I reviewed nearly three years ago, the all-new and super-affordable TerraMaster F2-210 boasts a more mature operating system and a broader app ecosystem, not to mention the snappiest performing web user interface I’ve seen.

While its sustained write speeds are a tad off the pace, The F2-210 delivers top-notch reading and media streaming—and it’s street priced at just $150 (without drives).

The F2-210 is a two-bay, front-loading box running TerraMaster’s own TOS operating system. When I say “TerraMaster’s own,” I mean its own flavor of Linux, the operating system that all the top vendors rely on for core software features. The box is constructed largely from plastic as are most boxes in this price range, but it’s painted in various shades of silver to give the impression of metal. Metal or no, it’s solidly built, and with hard drives inside, suitably stable. The fan is also very quiet, almost disturbingly so if you use sonic clues to determine if said fan is still running. (That’s a compliment, by the way)

The unit features a low-power 1.4GHz, Realtek RTD1296 (ARM Cortex-A53) CPU with 4K UHD video assist, and 1GB of memory. On the back of the box you’ll find the A/C jack, two USB 3.0 ports, and a gigabit ethernet port. There’s no quick-copy port or button on the front, as you’ll find on many end-user-oriented boxes, so if that’s a feature you desire, look elsewhere. If you keep the box out of the way and copy to it from other network locations, as the vast majority of users do, its absence is no big deal.

The box supports Btrfs for advanced features such as snapshots, and the plain-old ext4 file system for normal use. AFP (Apple), SMB (Windows), SAMBA, FTP, and WebDav network protocols/access are supported. The usual administration amenities, such as power on/off scheduling and email alerts, are all on hand

Media streaming is now more versatile, with Emby joining DLNA and Plex in the ranks of supported media servers. Plex now performs fine across my local network (it didn’t for a long time, for reasons unknown), but I still prefer DLNA, which is the streaming protocol supported natively by the majority of TVs, and that doesn’t require creating an account. An iTunes server is still provided, so if you’re looking for a streaming NAS box, the F2-210 is as good as it gets.

Other applications include the Transmission BitTorrent client, a text editor, a PDF viewer, and ClamAV anti-virus. There are also the usual host of business-related programs and programming tools, such as Python3,  Joomla, SugarCRM, OrangeHRM, IceHRM, PhP, and so on. If you’re running a small to medium-sized business, these can save you a ton of cash. About the only thing missing that you’ll find included with Synology and QNAP boxes is video-surveillance software. If you need to store video recorded by your hfome video cameras, take a look at TerraMaster’s F2-210.

Backup is generally well provided for with the company’s own simple utility, which handles Rsync to other boxes, and backup to local USB drives. The CloudSync utility will sync with OneDrive, Google Drive, and DropBox, and there are separate applications for those cloud-storage services as well. Time Machine is supported for Mac users. The app store also provides a download link to Aomei Backupper, a very capable free desktop backup client for Windows.

TerraMaster provides a web portal and access from mobile devices via its TNAS mobile app. You can use it to back up the files from these devices, and as a streaming-media app of medium effectiveness. You need to be running TOS 3.0 or later.

There’s still no support for automated remote-to-local backup, but you can install Net2FTP and perform manual backups via FTP or SFTP.  If you’d like to know why I mention remote-to-local backup support, read this article on automating backups without need of third-party desktop backup client software.

The F2-210 also offers a web server and WordPress, but the latter is an older 4.x version and I no longer recommend running WordPress unless you’re running the latest version. Why? I was ransom-wared recently on one of my Synology boxes running an even later version. I had recent backups, but if I hadn’t, the results could’ve been tragic.

If you do want to run the self-hosting risk to save the small amount of cash large online hosting services charge, then make sure there are no important files on the box and keep the site backed up. That’s advice for all NAS boxes, which are invariably well behind the curve with WordPress, PHP, and database updates and fixes.

When reading or streaming data, the F2-210 was fast at anywhere from 110MBps to 117MBps on CrystalDiskMark. That’s a bit more erratic than most, but 118MBps is about the limit for gigabit ethernet no matter what the box.

When writing sustained data, the F2-210 proved on the slow side, scoring anywhere from 87MBps to 104MBps. That’s hardly tragic, but the best boxes will write 15MBps or so faster and more consistently at that pace. But top boxes cost twice as much as this one does. The F2-210’s performance is more than adequate for home use and streaming, and it’s very good considering it’s one of the cheapest two-bay boxes available.

While the writing may be a tad slow at time, the web interface is the snappiest I’ve run across. With most others, I sometimes feel as if I’ve gone back to the performance of a decade ago. With the F2-210, I sometimes forget it’s actually running in a browser.

An excellent value in networked storage

Considering the price and low power-consumption CPU, I have only praise for the F2-210. It delivers very good performance where you need it, and it has all the features the vast majority of users need. I was especially impressed by the speed of the web browser interface.