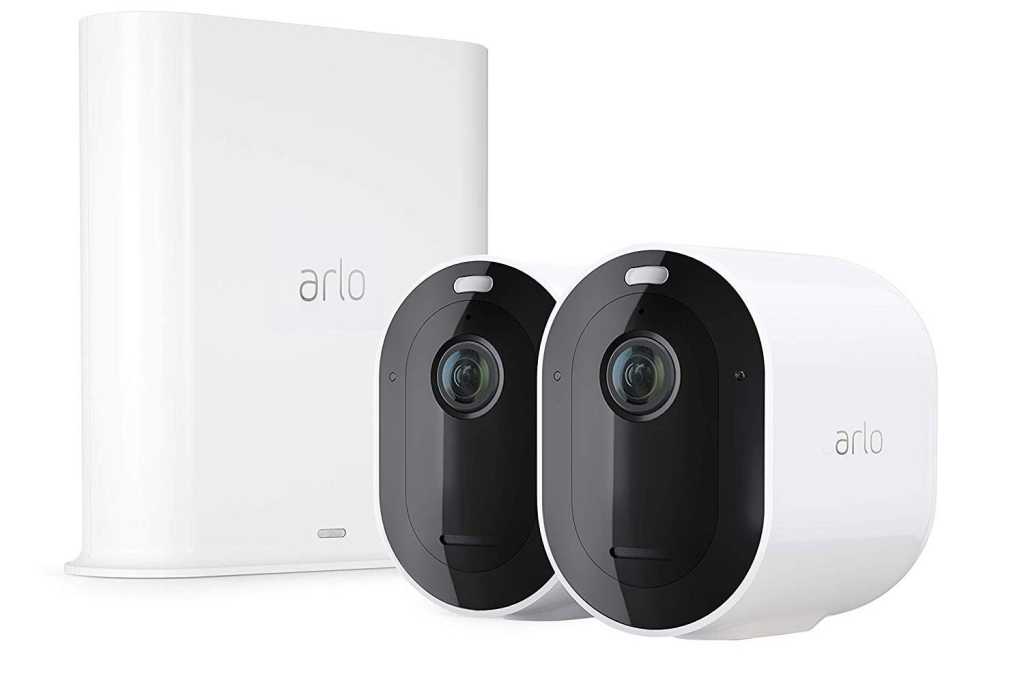 The Arlo 3’s next-gen features make it one of the best indoor/outdoor security cameras available.

Despite the fact that Arlo’s flagship Ultra camera was pulled from Best Buy for a time because of various performance problems, it ultimately became another winner for the Netgear spin-off. That triumph is reflected in the third-generation of the Arlo Pro, which adopts many Ultra features, including an on-board LED spotlight, color night vision, smart alerts, motion tracking, adjustable viewing angles, and continuous charging.

The Arlo Pro 3 doesn’t crib the Ultra’s next-gen 4K resolution, but it does boost it to 2K, an 80-percent bump from the 1080p Arlo 2. Other features, such as customizable motion zones and a multi-mode arming system, have also been kept from earlier versions of the camera.

The Arlo Pro 3 introduces a new SmartHub base station. At first glance, it doesn’t look much different from the one that accompanied the Ultra, but it replaces the original SmartHub’s microSD slot with a USB port, and supports up to 2TB of local storage, so you don’t need to depend on the cloud.

But if you want to unlock this security camera’s full potential—with AI features such as person, animal, vehicle, and package detection, you’ll need to cough up $10 a month for a cloud subscription anyway. Arlo will whet your appetitive for its service with a three-month free trial of Arlo Smart Premier, which also provides customizable activity zones, mobile lock-screen notifications, e911 emergency call service, and 30 days of cloud video storage for up to 10 cameras. But that’s much less generous than the one-year complimentary deal that Arlo Ultra buyers get.

Once the Premier trial is up, you can continue paying for the plan or opt for one of Arlo’s other two offerings: The basic Arlo Smart plan includes the AI and custom activity zones along with 30 days of video history for $3 per month per camera, but drops the emergency call service. The Arlo Smart Elite plan includes everything the Premier plan does, but increases the video history to 60 days for up to 20 cameras at a cost of $15 per month. Go without any plan at all and you’ll give up many of the features that make this camera special.

The Arlo Pro 3’s setup process is similar to previous Arlos. You first add the SmartHub in the Arlo app, plug in its power cord, and then connect it to an ethernet port on your router. Next, you add each camera, following the in-app prompts. As part of the installation, the app allows you view the Wi-Fi signal strength as you position the camera. This ensures you establish a strong connection before your commit to mounting the camera on your home’s siding or eaves. The Arlo Pro 3 uses the same magnetic mount introduced with the Ultra, which installs with a single screw. A security mount that locks onto the camera to prevent theft is also included.

Arlo says the cameras battery will last three to six months on a single charge, depending on usage. You can enable continuous charging by connecting the camera to Arlo’s Solar Panel Charger, which is sold separately for $80.

If you’ve only used previous Arlo Pros—or any high-definition security camera, for that matter—the Pro 3’s 2K HDR resolution is a revelation. Details are sharper, colors are richer, and clarity is maintained when zooming up to about half the camera’s 12X max.

Color night vision was excellent on the Ultra, and it’s excellent here. Using the camera’s motion-activated spotlight for illumination, it provides ample light and captures accurate colors, both of which translate into more detailed forensic evidence if a crime is being committed.

By default, the Arlo Pro 3 is set to a 160-degree field of view. You can reduce this in the camera settings to a 125-degree Standard view or a 110-degree Full view. I found the narrower angles better when I wanted to monitor my front porch for package deliveries, and the wider views more accommodating for viewing activity around my driveway.

My smart alert results were mixed. The Arlo Pro 3 was able to differentiate between my cat and me right out of the box, but it took a little longer to discern vehicles. These initially registered as generic motion, but were more frequently recognized as cars the longer I used the camera. Package detection was consistently hit or miss, however, as the Arlo Pro 3 more often ignored the package while identifying the person delivering it.

Motion tracking worked well, although—as AI features are wont to do—it could occasionally be finicky. It would without fail lock onto a moving target and shadow its movements. There were a few times, however, when I had the TV on, it would get distracted and abandon the person it was following, allowing them to move out of frame while it instead locked onto the movement on the screen. That didn’t concern me too much as I don’t leave the TV on when I’m away from home, but you might want to minimize any non-human motion while this feature is activated.

With the Ultra, Arlo moved the system’s siren from the base station to the camera itself, and that’s where it’s located on the Arlo Pro 3 as well. You can opt to have it sound off when motion is detected, and at 100 decibels, it’s guaranteed to scare the bejeezus out of anyone within earshot.

The Arlo’s four operational modes have been a fixture since the first camera and they are unchanged here. In Armed mode, the Arlo Pro 3 will record video when motion is detected and alert you via push notification. You can modify these rules, adding audio detection, charging the duration of the video clips, or triggering the base station’s on-board siren when movement is detected. Schedule mode automatically arms the camera at certain times and Geofencing mode arms it only when you’re away from home. Disarm turns off motion detection, but not the camera.

The Arlo app got an overhaul with the Ultra, and the new interface has been carried over here. You access each camera’s live feed, controls, and settings menu right from the devices screen. That makes it much easier to toggle between different camera views, since you don’t need to open a separate page for each Arlo. To expand any camera’s live stream to full screen, just tap the enlarging arrows in the top right of the thumbnail video.

Besides viewing the camera’s feed on your phone, you can use Alexa or Google Assistant to stream it on smart displays based on those platforms. The Arlo Pro 3 is also compatible with Apple HomeKit (although not HomeKit Secure video) when used with Arlo’s VMB4540 SmartHubRemove non-product link.

The Arlo Pro 3 starter kit start, with two cameras and a base station, costs $500. You can also buy kits with more cameras—a three-camera kit is priced at $650, which will save you about $50 over buying the two pack and adding a third camera later. The Arlo Pro 3 camera is also compatible with most of the older Arlo SmartHubs, so if you’re already an Arlo user, you can purchase Arlo Pro 3 cameras for $200 each (you can read about SmartHub compatibility on Arlo’s website). This is one of absolute the best indoor/outdoor security cameras you can buy.

Updated on February 21, 2020 with new details about HomeKit compatibility. In addition, this article had been updated shortly after publication to report that Arlo Pro 3 starter kits are available only with two or more cameras, plus the Arlo SmartHub.