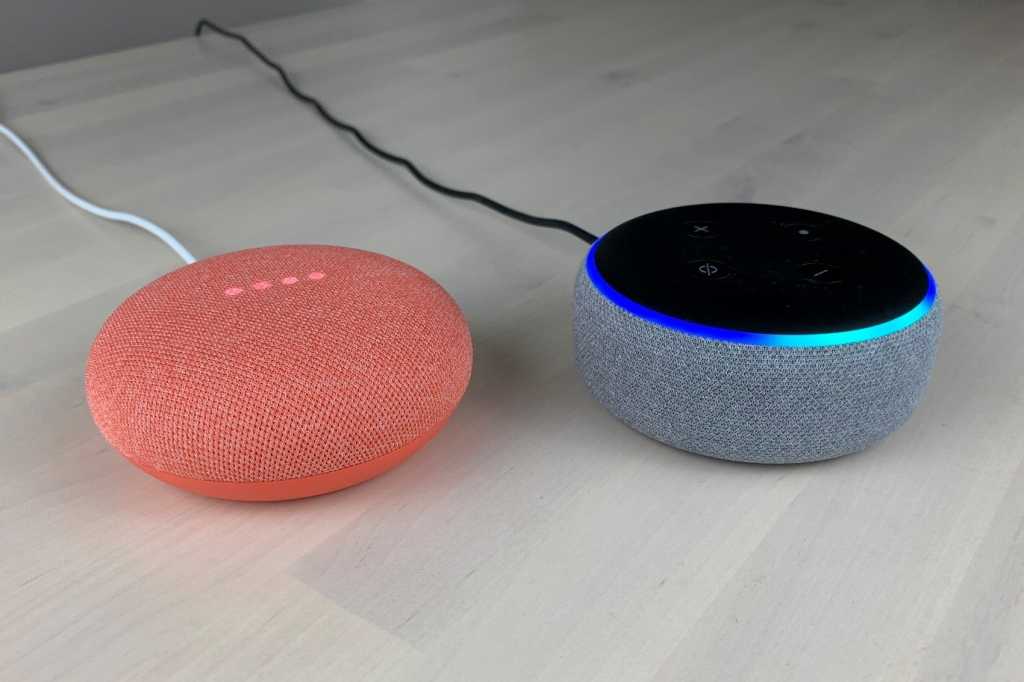 So, you’ve decided to take the plunge and snap up your first smart speaker or display (trust us, you’ll love it). Here’s the big question, though: Should you pick one that answers to Amazon Alexa, or Google Assistant?

That’s the choice you’ll face when you’re deciding between Amazon Echo speakers and displays, home to the ubiquitous Amazon Alexa, or Google Nest (formerly Home) devices, which are powered by Google Assistant.

What’s the best way to choose between Echo and Nest? Well, that depends on a variety of factors. Do you want to be on the platform that’s compatible with the most smart gadgets, or the one with an assistant that can answer the broadest range of questions? Would you prefer the platform with the most third-party apps, or maybe the one that’s most adept at setting up daily routines?

Now, if someone were to ask me to pick the best smart speaker/display ecosystem without any other context, I’d have to go with Amazon Echo.

Thanks to Alexa, Echo devices boast the greatest number of smart integrations, the smartest routines (or programmable actions that are triggered by various circumstances), the most third-party skills (or, at least, the easiest to discover), and the widest variety of hardware. Then again, it’s tough to beat a Google Assistant-powered Nest speaker at answering general questions, and Google has some clever home security features on tap for Nest speakers that could help tip the scales in its favor.

Let’s break it down, starting with…

One of the best things you can do with your new Echo or Nest device is use it as a command center for all the other smart devices in your home. Just ask Alexa or Google, and they can turn your lights on and off, check your security cameras, turn on your TV, pull your shades, and even brew some beer.

Of course, not all smart devices work with every platform, and while there are plenty of gadgets that work with both Alexa and Google Assistant, you’ll often find that they pick one or the other.

Now, if there’s a specific smart device that you’re absolutely set on using and it only works with Alexa or Assistant, well, your decision might already be made. But if you’re just getting started in the smart home world and you don’t have any particular gadgets in mind, picking the platform with the widest third-party smart gadget support makes for a good starting point.

Alexa, for its part, boasts compatibility with a dizzying number of brands, ranging from Arlo and August to Zentec and Zulux, and Amazon claims that more than 85,000 smart gadgets from more than 7,500 brands work with Alexa. Walk into the smart home section of your local Best Buy, and you’ll see the Alexa logo everywhere. Indeed, in my experience, if a smart product works with any smart platform at all, Alexa is almost always one of them.

Google Nest, which is powered by Google Assistant, is almost as ubiquitous as Alexa when it comes to smart home integrations, but it’s still trailing by a fairly decent margin. The last we heard, about 30,000 products across more than 3,500 brands work with Google Assistant, including such major smart home players as Arlo, August, Belken, Signify-owned Philips Hue, Kasa, Logitech, LIFX, and more.

Of course, the sheer number of gadgets with which a smart home platform is compatible doesn’t mean squat if it doesn’t work with the smart devices that matter to you most. Still, if we’re just talking numbers here…

Strictly speaking, a digital assistant’s ability to answer general questions (“Who was George Washington?”) isn’t a smart home feature per se, but since picking one of these two big smart speaker platforms entails spending quality time with either Alexa or Google Assistant, we thought it was worth covering.

Amazon has spent years and untold bazillions refining Alexa’s ability to parse your sentences, anticipate likely follow-ups, and otherwise tease meaning out of our daily questions. But while it’s peerless when it comes to understanding your questions, Alexa sometimes whiffs when it comes to answering them, particularly general questions like, “What are the Canterbury Tales about?”

Alexa’s problem is that she isn’t Google—or, to be more specific, she can’t tap into Google’s frighteningly vast pool of knowledge about anything and everything. Indeed, Amazon recently rolled out a program called Alexa Answers to help crowdsource answers to questions that are stumping Google. Not a bad idea, but Alexa isn’t going to out-Google Google anytime soon.

You wouldn’t invite a roommate into your home without some level of trust, right? Same goes for digital assistant-powered smart platforms like Alexa and Google Nest. Along with Apple’s Siri, Alexa and Google Assistant were snared in a privacy scandal last summer when it was revealed that Apple, Amazon, and Google had allowed third-party contractors to listen to voice recordings from their respective digital assistants in order to gauge their accuracy. Talk about a breach of privacy, not to mention trust.

Since then, Apple, Amazon, and Google have been bending over backwards to make amends, with all three companies rolling out new privacy controls and policies clarifying what they’re listening to, why they’re doing it, and how you can opt out, if you wish.

Both Alexa and Google Assistant (and Siri too) now let you review everything they’ve heard you say, and you can easily delete their listening histories. You can also opt out of “manual review” of your voice recordings, as well as set both Alexa and Google Assistant to automatically delete your assistant activity after a set period of time. That said, we’re still paranoid about our smart speakers and displays listening to our every word.

Winner: Tie (and we’re not thrilled about calling anyone a “winner” here)

Both Alexa and Google Assistant let you set up “routines,” which are actions (or a series of actions) triggered by a specific event. You can, for example, set Alexa or Google Assistant to turn on your lights, tell you the weather, and then read the news when you say, “Good morning,” or dim the lights, close your curtains, and turn down the thermostat when you say, “I’m going to bed.”

But while both digital assistants boast a wide variety of actions for a given routine, Alexa gets the nod for the most diverse group of triggers. While Google Assistant’s triggers are pretty much limited to voice commands, Alexa’s routines can be triggered by your location (for example, when you leave work or arrive home), an alarm being dismissed, the time of day (either a specific time, or sunrise or sunset), or the press of an Echo ButtonRemove non-product link.

After you warm up to your first smart speaker, you’ll eventually get around to snagging a smart display—and once you do, you’ll quickly find that one of your favorite smart display features is its ability to double as a digital photo frame.

Amazon’s Echo Show displays let you display a slideshow of your Amazon Photos or Facebook snapshots, and you can choose an album of handpicked photos or an automatically generated one of friends and family, all thanks to the magic of facial recognition and machine learning.

Google’s Hub and Hub Max displays one-up the Echo Show with their support for Google Photo’s Live Albums feature, which makes it incredible easy to create a continually updated album of friends, loved ones, and even pets. And not only does Google seem more adept at recognizing faces, it also does a better job at creating attractive photo collages, which help to fill the entire screen when dealing with portraits.

While there’s a galaxy of home security devices that you can control with Alexa and Google Assistant, both Echo and Google Nest devices count as security-minded gadgets in their own right.

Take Alexa Guard, a feature that lets your Echo device keep an ear out for breaking glass, and carbon monoxide or smoke alarms, and it can send you a mobile notification or send an alert to a professional monitoring service if you’re using a Ring Alarm or an ADT-compatible security service. Amazon has also announced that Alexa Guard will soon be able to detect any other “sounds of activity” while you’re away (such as footsteps, talking, or running faucets).

Not to be outdone, Google Nest devices will also soon be able to hear suspicious sounds at home, while the Google Nest Max smart display comes with its own built-in Nest camera that comes on automatically whenever you leave home, and turns off when you return.

Not bad, but Google Nest’s upcoming built-in security features will depend on Nest Aware, a paid subscription service. By the time Nest Aware includes “suspicious noise” support for Echo speakers, it will cost $6 a month, a price that covers all your Nest security devices. (Currently, Nest Aware starts at $5 a month for a single Nest camera.) Alexa Guard, on the other hand, is free, and we’re big fans of free.

Both Amazon and Google offer a range of their own branded smart devices, some big, some small, some with displays and others that are just speakers. But Amazon Echo has a clear edge in the sheer variety of its first-party hardware and accessories.

Google’s smart ecosystem ranges from the $50 pint-sized Nest Mini speaker (which was formerly known as the Home Mini) up to the $230 Nest Hub Max, which boasts a 10-inch display and (as we mentioned earlier) a built-in Nest camera. In between, there’s the 7-inch Nest Hub display and the mid-size Google Home speaker. There’s also the high-end, $300 Home Max speaker, plug the new Google Wifi mesh routerRemove non-product link (starting at $170), complete with Google Assistant built into each optional Wifi node. Overall, it’s a solid, sensible lineup.

Most actions and apps

Beyond their basic features and functionality, both Alexa and Google Assistant support third-party apps that work on smart speakers and displays. Alexa calls these apps “skills,” while Google Assistant dubs them “actions.” Like the apps on your phone, Google Assistant actions and Amazon Alexa skills allow both assistants to do such things as tell jokes, call cabs, order pizza, check your bank account, and more.

Quantifying which smart platform has the best apps is a tricky business. We could start with how many apps each platform has, but getting meaningful numbers can be tricky. Amazon recently crowed that Alexa just topped 100,000 skills, while Google claims that Assistant has more than a million actions, although a third-party analysis from earlier this year put Google’s number closer to about 4,200—a pretty massive disparity. (Maybe Google counts each individual command as an action? Hmmm.)

Beyond the sheer quantity of actions and skills, there’s the issue of quality, and a quick glance through Amazon’s directory of skills reveals plenty of low-quality offerings, many of which require a purchase to unlock their full functionality.

Still, we’ll give the edge to Alexa here on the sole basis of discoverability, with the Alexa mobile app boasting a Skills directory that’s easy to both browse and search. For Google Assistant, you’ll have to go on the web to explore its available Actions in any detail.