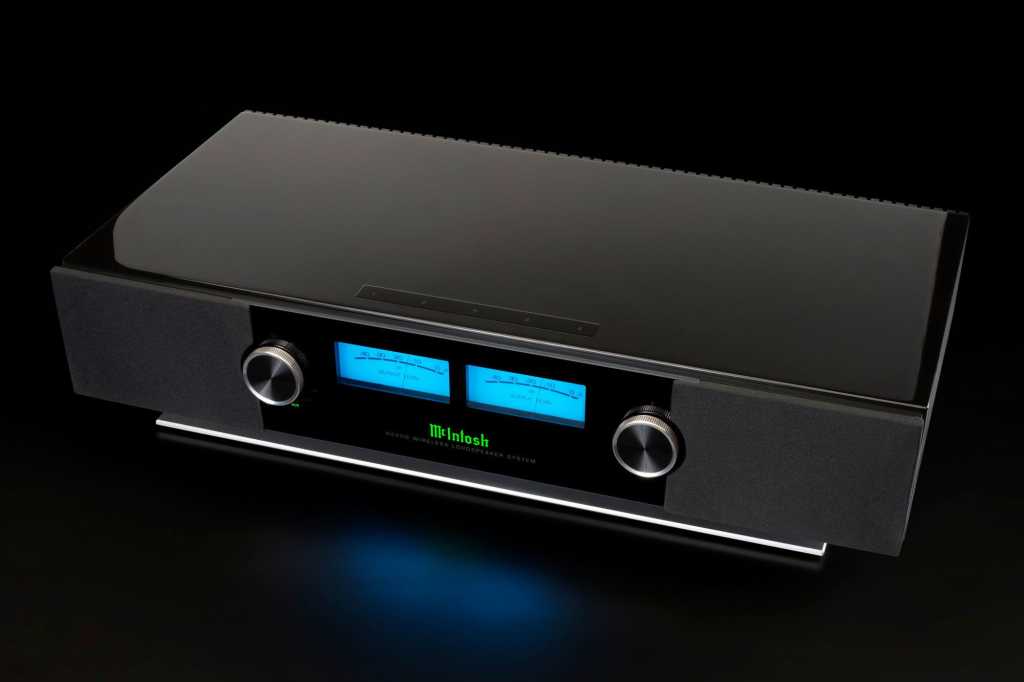 Image: McIntosh Labs
At a Glance

This monster of a wireless speaker has the look, build quality, and price of a high-end audiophile product, but its sound quality falls somewhat short.

McIntosh was the epitome of high-end audio systems when I was in college. Its distinctive logo and bright blue-backlit level meters were instantly recognizable, indicating that the owner was serious about sound.

Celebrating its 70th anniversary this year, McIntosh continues to represent high-quality audio as it expands its portfolio to include more contemporary products. The RS200 is a perfect case in point. This 2-channel wireless speaker offers all the features we’ve come to expect in such a product, but unfortunately, its sound quality does not measure up to the standard I had come to expect from McIntosh.

Sporting a pair of the company’s iconic blue-backlit level meters on the front panel, the RS200 is huge for a wireless speaker, measuring 24.8 x 5.75 x 12.6 inches (WxHxD) and weighing in at a hefty 29.5 pounds. Its sloping undercarriage almost makes it appear to be floating above its metal base, which is pretty cool.

The driver complement includes two 0.75-inch titanium-dome, fluid-filled tweeters and four 2-inch titanium inverted-dome midrange drivers on the front face of the unit. Two 4×6-inch long-throw woofers fire downward onto the metal base below the sloping undercarriage. The woofers share a common chamber, which is vented downward at the front of the unit.

The tweeters and midrange drivers are powered by a total of 400 watts, while the woofers have a total of 250W pushing them around. Overall frequency response is specified from 40Hz to 20kHz (-3 dB) with THD+N less than 0.05% (mid-band).

Of course, the primary means of getting audio into the RS200 is wirelessly. It implements Bluetooth 5.0 with the A2DP profile and AAC, aptX HD, and aptX Low Latency codecs, which are generally considered to be the highest-quality consumer codecs available today.

In addition, audio can be sent to the unit via Wi-Fi (802.11a/b/g/n at 2.4 and 5 GHz) using Apple AirPlay 2, DTS Play-Fi, and DLNA, allowing the RS200 to join a whole-home wireless audio system. It can also stream audio from a variety of online providers, including Tidal, Napster, Amazon Music, Spotify, Pandora, Internet Radio, iHeartRadio, and others. As if that weren’t enough, it can play audio from any of its inputs to other Play-Fi speakers.

Another interesting Play-Fi feature is the ability to play the front three channels in a 5.1 surround-sound setup. Two Play-Fi wireless surround speakers complete the surround package.

Physical connections include a 3.5mm 2-channel analog-audio input, optical digital-audio input, USB Type B port, and HDMI ARC input, which you would connect to the TV’s ARC input if you decide to use it. The HDMI ARC and ptical inputs imply that the RS200 can be used as a soundbar, which it can, but it’s way too deep to fit in a tight space below the screen.

There’s also an RCA subwoofer output if you want even deeper bass from a powered sub. Other connections include a 12V trigger output, data output that sends proprietary control signals to other McIntosh devices, and a USB service port for service techs only.

Like most wireless speakers these days, the RS200 works with Amazon Alexa voice commands. But it is not a smart speaker in and of itself; you’ll need the Play-Fi app and an Alexa-enabled device to control it with voice commands. A growing number of online music services respond to Alexa commands, so if you’re into that sort of thing, it’s available. The speaker does not currently support Google Assistant.

Three controls are also found near the connections on the back panel. The EQ slider selects one of three preset equalization curves for placement near a wall, on a table, or completely freestanding. Placing the unit near a wall acoustically boosts the bass, which the Wall EQ setting compensates for by cutting low frequencies from about 100 to 500Hz by a few decibels.

I was a bit confused about the Free and Table settings; after all, the RS200 will be placed on a flat surface in any case. According to the manual, “The Table setting is to compensate for reflective surfaces that may be present if the unit is pushed back eight or more inches from the edge of a flat surface (like a table).” According to a McIntosh rep I spoke with, it cuts a narrower band of frequencies around 100Hz by a couple of decibels. The Free setting is designed for use when the unit is close to the edge of the surface on which it is placed.

The CEC Defeat button enables and disables HDMI CEC (Consumer Electronics Control), and since CEC does not always work as expected, I recommend disabling it. As its name implies, the Wi-Fi Reset button resets the Wi-Fi functionality. The only other control is the master power switch next to the AC power-cord connector.

Two multifunction knobs that can be turned and pressed flank the level meters on the front. The left knob selects the input, initiates Bluetooth pairing, indicates Wi-Fi status with a multicolored led, and controls the brightness of the level meters’ backlight. The right knob lets you adjust the volume, engage and disengage mute, and enter and exit Power Save mode. Holding both buttons for 10 seconds resets the unit to its factory condition.

The RS200 comes with a relatively simple IR remote. Controls include power on/off, volume up/down, mute, input selection, meter/LED lights on/off, and lip-sync increase/decrease, which delays the audio up to 150ms as needed to synchronize the audio to the video image. Three transport buttons include play/pause and skip track forward and back that work with compatible sources.

The input-selection button is surrounded by a ring with the numerals 1 through 4. Pressing these numerals recalls one of up to four Play-Fi presets. (Four touch-sensitive “buttons” on the top of the RS200 can also be used to recall the presets.) As of this writing, you can assign presets to Internet Radio, iHeartRadio, Tidal, Spotify, and Pandora, but more services will be added in the future.

Setting up the RS200 was not a smooth process for me. When I first plugged it in and turned it on, the Net light was pulsing, indicating that it was ready to be connected to a Wi-Fi network. I wanted to start with Bluetooth from my iPhone XS, so I did what the manual instructs: “Place the RS200 in pairing mode by pressing and holding the left knob for two seconds.” When I did that, nothing happened after two seconds, and I didn’t see the RS200 in the list of Bluetooth devices on my phone.

Next, I tried to connect it to my Wi-Fi network using the Wi-Fi settings on my phone. I saw the device labeled PlayFi2Device in the list of networks—not devices—so I selected it, but the Net light kept pulsing like nothing had happened. Also, my phone was now disconnected from the network.

I spoke with a McIntosh technical rep, who tried the same procedures on his iPhone 8, and he reported more success than I had. He recommended that I download the Play-Fi app and try to connect the RS200 to my Wi-Fi network through the app, which worked—sort of. The Play-Fi app reported that device was not discovered and to try again, but it actually was discovered and connected to the network. After disabling Bluetooth on my phone, I was able to play music from my phone via AirPlay over Wi-Fi.

Regarding Bluetooth pairing, he told me to hold the left knob for two seconds and then release it, which worked after I re-enabled Bluetooth on the phone. (I should have read the next sentence in that section of the manual: “Release the knob.” Duh…)

I placed the RS200 at the edge of a table away from walls and selected the Free EQ preset to begin with. I started my listening with “One” from Esperanza Spaulding’s album Emily’s D+Evolution. The sound was quite congested and veiled, especially in the bass. I tried all three EQ presets, but all sounded quite boomy.

I called the McIntosh rep about it, and he helped me discover that the firmware needed to be updated from version 3.48 to 3.64. Apparently, the latest firmware tweaks the EQ, especially the Wall setting. I downloaded the McIntosh Updater app, which is now available for iOS and soon for Android. It took about 15 minutes to update the firmware.

After the update, the sound improved somewhat, but not dramatically. After listening to all three EQ presets, I ended up preferring the Table setting, even though the unit was sitting at the edge of a table. It cut the bass a bit compared with the Free setting, but not as much as the Wall setting, which sounded slightly wimpy to me.

In the realm of world music, I started with “House of the Ancestors” from the album Sound Magic by Afro Celt Sound System, which blends Celtic and African instruments and influences. The RS200 sounded rich overall with tubby bass. The vocals sounded quite good, though somewhat recessed.

The same was true for “Farewell” from the Yuval Ron Ensemble’s album Tree of Life. This track features oud (Middle Eastern lute), duduk (Armenian clarinet), hand percussion, and female vocals. The oud sounded thick and congested, but the hand percussion vocals sounded quite good and rich.

Turning to jazz fusion, I listened to “Bright Lights” from the album Fast Forward by Spyro Gyra. Overall, the sound was rich and thick, with congested bass and drums. On the other hand, the vibes and saxophone sounded quite good. Moving on to country rock, “Pickin’ Up the Pieces” from the album of the same name by Poco also sounded thick and rich with boomy bass, though the vocals were good.

Finally, I tried a couple of classical tracks. Placido Domingo sings “Aranjuez” (an adaptation of the second movement of Concerto de Aranjuez, originally for guitar) on his album Encanto del Mar. Domingo’s voice is rich on the RS200, though a bit recessed in the mix and slightly congested. In the accompanying instruments, the harp, guitar, bass, and percussion were very congested, though the soprano sax and clarinet were quite good.

As I had come to expect, the low-mid range was pretty congested listening to Molly on the Shore by Percy Grainger as performed by the London Wind Symphony under Denis Wick on their album Grainger: A Lincolnshire Posy. However, the higher instruments were nice and clean, though certainly rich overall. 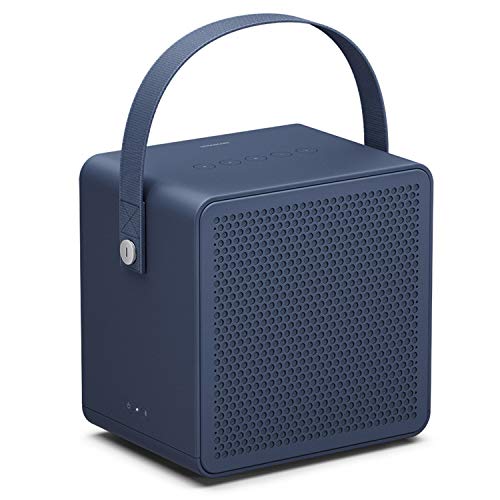 For comparison, I also played all tracks on the Urbanears Rålis, which I reviewed here. At $180, it’s a mere six percent the cost of the RS200, but it’s the best wireless speaker I have on hand.

In all cases, the Rålis sounded lighter, brighter, and more open than the RS200. The bass was not as deep, while vocals sounded more forward. Which one you prefer comes down to a matter of taste; I generally preferred the sound of the Rålis.

I was fully prepared to love the sound of the McIntosh RS200—and shocked that I didn’t. Overall, it has some characteristics of high-end, audiophile sound: rich and sumptuous, with a clean mid-to-high range. But the congestion in the bass and lower midrange really detracts from the positive qualities, and vocals are somewhat recessed. By contrast, the Urbanears Rålis sounds somewhat thinner but more open and better balanced.

Then there’s the size—the RS200 is humongous! I struggled to find a place it would fit in my house for this review, and I have no place I could put it on a permanent basis.

At $3,000, the RS200 is definitely a high-end product with exceptional build quality, and it has a nice feature set. Given the shortcomings in its sound quality, however, I cannot recommend it.