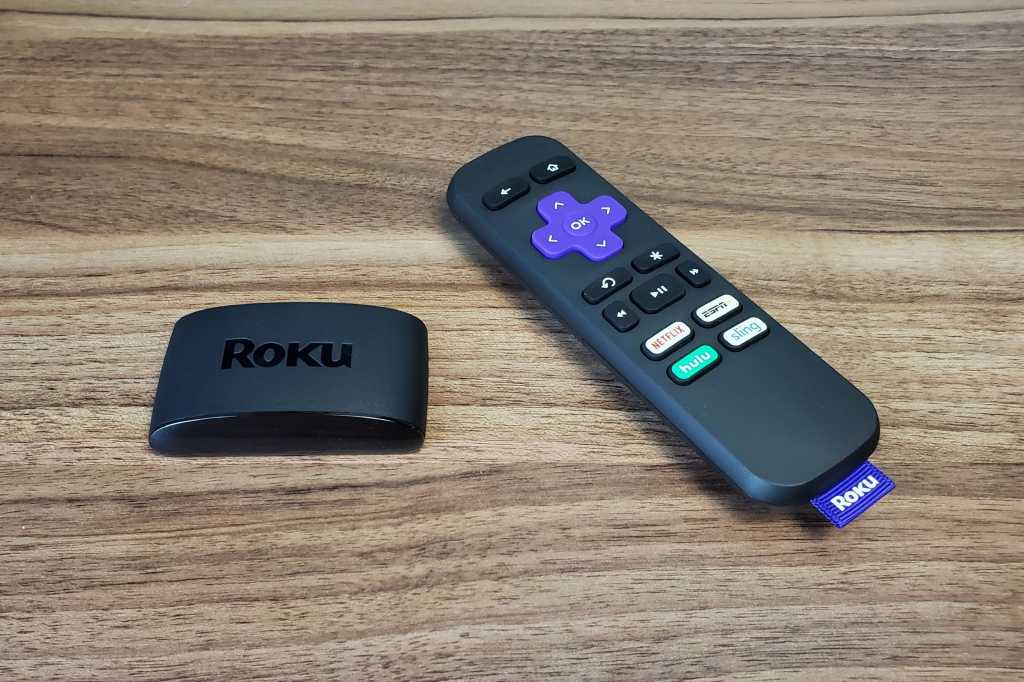 In 2019, you shouldn’t have to juggle more than one remote control to watch TV. With most media-streamer remotes, volume and power buttons are built in, so you don’t need to keep a second remote handy.

The Roku Express is a notable exception. At $30, it’s the cheapest streaming player that Roku sells. It’s also by far the worst, mostly because it lacks the TV controls that are now standard on every other streaming player. As more people drop cable or satellite TV and depend entirely on streaming, this omission has become inexcusable, especially when the Roku Express+ (sold exclusively at Walmart) has a superior remote for just $10 more.

I therefore implore you: Spend the extra money and thank me later.

In every other way, the Roku Express is fine. The 2019 version has a new design that’s more energy efficient—Roku says it can run off the powered USB port on nearly every TV that has one—but it’s still a palm-sized black box with an HDMI port in the back. It comes with a 2-foot HDMI cable, plus a strip of adhesive so you can stick the Express to your TV stand or to the TV itself. The box requires line of sight to the remote, however, so you can’t hide it inside an entertainment console.

Performance feels similar to other Roku players, with the exception of the slightly faster (and much pricier, at $100) Roku Ultra. Roku has done an excellent job optimizing its streaming software for cheap hardware, so you’ll seldom need to deal with choppy scrolling of excessive load times. The only downside, as with all Rokus, is that there’s no fast way to switch between recent apps.

As for Wi-Fi connectivity, the Roku Express does not support hardwired ethernet, and its single-band 802.11n (Wi-Fi 4) connectivity is well behind the times. It should be fine if you’re not putting a lot of other demand on your Wi-Fi network, or if you don’t have a lot of neighbors with their own networks in close proximity. If wireless interference is an issue, you’ll want a streaming device with dual-band Wi-Fi 5 support, such as the Roku Streaming Stick+, with a Wi-Fi 5 or better router to match.

The main problem with the Roku Express, again, is the remote. If you’ve never used a streaming remote that has volume and power controls built in, you’re missing out on a much more convenient experience. And once you’ve gotten used to that convenience, going back is hard to tolerate.

Those missing controls aren’t the remote’s only issue. It doesn’t have a microphone button either, so you can’t use voice to look up a specific show or search by genre, nor can you launch content directly by voice in apps that support this function, such as Hulu, Pandora, and The Roku Channel. Although Roku’s smartphone app still lets you perform voice controls on the Express, using it is a hassle compared to pressing a button on an actual remote.

The Express’ infrared remote also feels less responsive than other Roku remotes that use a radio-frequency connection. While the player is pretty good at receiving an IR signal when you point the remote in different directions, commands don’t always register when you press a directional key several times in quick succession, so scrolling through long lists takes more effort.

Once more, this is where I stress that for $10 more, the Roku Express+ is available from Walmart with volume, power, mute, and voice search buttons on its remote, and with a more responsive RF connection. (This model is not to be confused with the previous-generation Roku Express+, whose main distinction was composite video output for old tube TVs.) Do not cheap out on the one element of the streaming experience you’ll interact with the most.

On the software side, the Roku Express is functionally similar to other Roku players. The main menu presents a grid of streaming video apps alongside a list of other functions, such as search, the app store, and a selection of free ad-supported content.

It’s all pretty straightforward, especially when you know what you’re looking for, but as with other Roku players, the Express falters a bit when you’re feeling indecisive. There’s no easy way to access the shows you’re already watching from across different apps, and no way to search for content by genre. (On other devices, Roku has started surfacing “zones” of movies and shows with certain genre searches, but these don’t seem to be available on the Express.)

On the upside, Roku players are great at surfacing free content to watch. The “Featured Free” section of the home screen pulls in ad-supported movies and shows from across different apps, while The Roku Channel app has its own free selection. The ability to listen privately through Roku’s mobile app, with headphones connected to your phone, also remains a nice touch that other platforms lack.

Because of Roku’s ease of use and free content, it tends to be my default recommendation for anyone who’s new to streaming devices and doesn’t know where to start, even if the software is less snazzy than, say, Amazon Fire TV or Apple TV devices. If not for its substandard remote, the Roku Express would be a great budget pick, especially compared to Amazon’s sluggish Fire TV Stick, which costs $40.

Instead, those in need of a cheap streaming player should grab the Roku Express+ from Walmart or wait for a sale on Amazon’s Fire TV Stick 4K, which is much faster than the non-4K version and often sells for less than its $50 list price. For just a little more money, better remotes are much easier to come by.