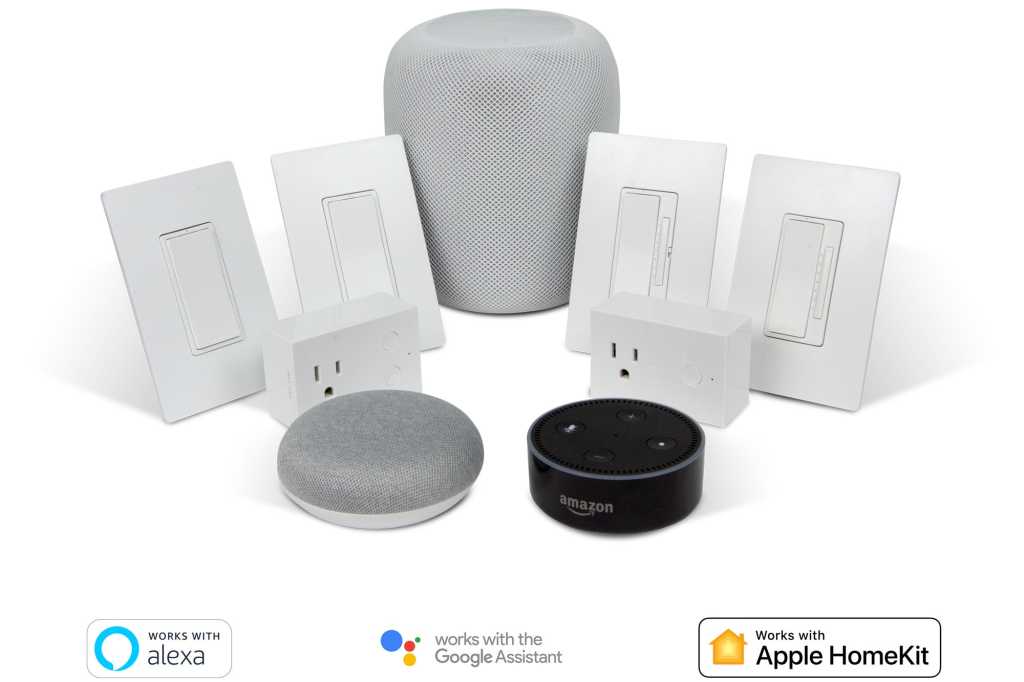 Legrand
At a Glance

This in-wall dimmer’s homely looks will put it behind other HomeKit-compatible dimmer choices for most.

Legrand is one of those companies you’ve never heard of, but that owns a passel of familiar brands, including Nuvo (high-end multi-room audio), Da-lite (video projector screens), and Sanus (display mounts). The French conglomerate is best known for making smart home and home theater products for high-end homebuilders and custom installers, but it’s been making moves in the DIY space lately, acquiring Netatmo (security cameras, weather trackers, etc.) in 2018, and now introducing a bevy of smart switches and smart plugs (six in total) under its own name.

Figuring out which of the six products—four in-wall switches and two smart plugs—you might need can be daunting, so here’s the lowdown.

For in-wall switches, two are dimmers and two are standard on/off units. While all four work over Wi-Fi, you’ll need the model HKRL50WH dimmer ($63) or the model HKRL10WH switch ($46) if you want to incorporate them into an Apple HomeKit-based smart home. The model  HKRL60WH dimmer ($60) and model HKRL20WH switch ($40) are identical in appearance to the aforementioned products, and you’ll need one of them as a companion switch if you’re installing them in a three-way configuration. Got it?

The two smart plugs namely differ only in their support for dimming. The Plug-In Tru-Universal Dimmer reviewed here ($46) has two control buttons on its face, while the model HKRP10 Plug-In Switch ($40) has just a lone power button.

The in-wall dimmer switch has an unusual hardware design for a smart switch. Wires must be threaded into a terminal slot, and then secured with terminal screws. This is a helpful design if space is tight inside the junction box, as it eliminates the need for extra pigtails and wire nuts—athough both are included if you need them. (You’ll probably need to use at least one for the white/neutral wire, and one for the hardwired ground pigtail.)

The design of the switch itself is a bit busy, with an on/off paddle, a separate dimmer paddle, and a hardwired kill switch, all in a row. LEDs alongside the dimmer paddle give you an idea of where the overall brightness setting is, and a single LED at the top of the device illuminates when the light is turned off. (It can function sort of like a nightlight, but there’s no way to disable it.) Strangely, the switch cover comes in two pieces. There’s a black intermediary chassis that must be attached to the switch itself via screws, and then a white cover plate snaps on top of that.

From a hardware perspective, most of the switch’s functions are intuitive: Double-tap up or down to reach maximum brightness or turn the switch off, and hold the dimmer paddle either way to fine-tune things.

With the hardware installed, your next task is to turn to the Legrand app to add it to your network. Note that there are at least three different Legrand apps in the Apple Store. The one you want is called “Legrand Home.” As expected, it’s a standard control app that works with all HomeKit devices, so any previously connected HomeKit devices will show up in the app immediately after installation.

It’s here where I ran into my biggest problem with the device. While I had no trouble scanning the HomeKit code and connecting the switch to Wi-Fi, the Legrand app next suggested that I needed a firmware update.

When I tapped the update button, the switch froze, unable to complete the update and disconnecting from the network entirely. I tried resetting the switch several times, and even waited overnight for the update to complete, but it froze every time. Legrand tech support was baffled and eventually replaced the switch—with one whose firmware had already been updated.

The Legrand Home app isn’t the most streamlined, and some curious color palette choices can leave you with light beige text on a dark beige background in certain parts of the app. It’s both hard to read and unappealing to look at. The app is also a bit difficult to use beyond simply turning the switch on or setting the dimmer level. To automate the switch, you must first create a scene for it, and then assign that scene to an automation. This is a multi-step process that novices won’t find intuitive. That said, scheduling and key features such as geofencing worked fine in my testing. As well, the switch supports Alexa, Google Assistant, and Siri for voice control.

The $58 price tag positions this device near the top end of the market. Though a few devices (like the iDevices dimmer) are even more expensive, many name-brand offerings hover around the $50 range or lower. Legrand unfortunately offers nothing of real value that elevates its product above the rest of the field to merit the extra outlay—even if they do promise to update the firmware for you.

The design of the Legrand Plug-In dimmer is surprising primarily due to its overall size. It’s wider than a receptacle plate and, more importantly, also quite tall. The height is considerably greater than the typical smart plug, and it definitely blocks the upper socket if you use it in the lower socket on a two-outlet receptacle. The overall appearance isn’t all that aesthetically pleasing, its sole three-prong outlet offset to the left and two chunky buttons appearing to the right. A large HomeKit sticker is placed on the top of the device, which is convenient, but also rather unappealing.

The good news is that there’s no hardware installation hassle with a plug-in dimmer—but just as with Legrand’s in-wall dimmer, I had the same issue with a failed firmware update with this plug-in version. Again, Legrand sent a replacement with already up-to-date firmware so I could continue testing.

Functionally, this product works about the same way as the in-wall dimmer. Using the plug-in dimmer via the app was identical to that of the in-wall product, and I had the exact same experience with this product’s software. The hardware is however more limited. There are only two buttons to work with, and they’re naturally less intuitive than the wall switch.

Holding down either button brightens or dims through only five levels, brightening or dimming by 20 percent of total power for each second you hold the button. (In contrast, you can set the brightness by one-percent increments in the app.) Double-tap the top button to quickly tune the dimmer to 100-percent brightness.

As with the in-wall switch, a small LED on the face of the dimmer is illuminated whenever the switch is powered off; again, serving as a tiny nightlight of sorts.

Most plug-in smart switches don’t include a dimmer option, and those that do can be pricey. And like Lutron’s plug-in dimmer, they tend to be homely. At $35, the Smart Plug-In Tru-Universal Dimmer is a better deal than Legrand’s in-wall switch; but if you don’t absolutely need a hardwired dimmer on board, your sense of aesthetics might send you to another type of add-on plug altogether.