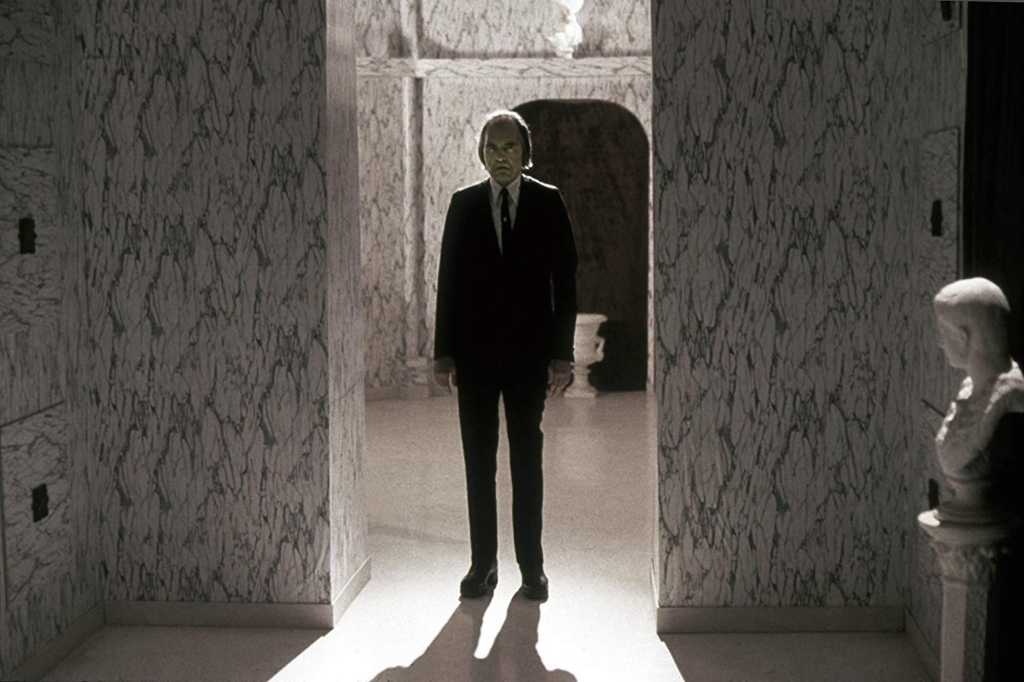 Only certain kinds of scary movies are appropriate for Halloween time. For example, Jaws is a great scary movie, but it’s a movie for summer, not for fall with its pumpkins and barren trees. Once again, we have combed the streaming services and endured hours of bone-chilling terror to bring you an ultimate watchlist, 13 titles from the beginning of cinema until 1995.

Check back next week for our pick of modern essentials.

Directed by Danish filmmaker Benjamin Christensen, this bizarre silent film begins as a documentary about witches but turns into a real, honest-to-goodness horror film with scary images of devils, possessions, evil spells, and more. Häxan (1922) is perhaps one of the earliest attempts to break the rules, mixing fact, fiction, and opinion, and concluding with a condemnation of the hysteria of witch-hunts.

In a final, bizarre touch, Christensen cast himself as the Devil. The Criterion Channel offers the full-length 105-minute silent version with music by the Czech Film Orchestra, as well as a 1968 edited version called Witchcraft Through the Ages, running only 76 minutes, and featuring music by Jean-Luc Ponty and narration by William S. Burroughs. Both are highly recommended.

The English-born director James Whale made some of the best monster movies at Universal in the 1930s, including Frankenstein, The Invisible Man, and Bride of Frankenstein, but this great film isn’t quite as well known. The Old Dark House (1932) finds several travelers stranded during a torrential rainstorm in a creepy house, full of strange behavior and weird secrets. Whale seamlessly combines many oddly funny moments with moments of atmospheric chills, and he wraps up the whole package in his own unique persona, slightly campy, but genuine.

In the 1940s, producer Val Lewton made an incredible series of nine “B” horror movies for RKO, each moody and literate and based on the idea that terror could be suggested, rather than shown. All nine are highly recommended, and all are available on the Criterion Channel. Cat People (1942) is probably the most famous, and I Walked with a Zombie (1943) and The Seventh Victim (1943) are arguably the best.

The latter stars Kim Hunter (A Streetcar Named Desire) in her movie debut as Mary, a naïve girl who comes to New York to find her missing older sister. Her first clue is an empty room with a single chair placed directly under a noose! It all leads up to a secret, sinister cult. Jean Brooks co-stars as the witchy sister, Jacqueline, with Bettie Page bangs, and Hugh Beaumont (TV’s Leave It to Beaver) plays a man with his own connection to Jacqueline. Mark Robson directs with an intense shadowy quietness.

Dead of Night (1945) was not the first horror anthology movie, but it is routinely cited as the best, and it has lost none of its power to terrify. Mervyn Johns plays a man who decides to spend a weekend in the country after being plagued by a nightmare. There, he is shocked to meet several people that he has previously seen in his dream. They all begin telling stories, ranging from a silly one about two golfers, to two supremely spooky ones about a haunted mirror and a ventriloquist’s dummy. Another one takes place at a children’s Christmas party.

There are five stories in all, plus the wraparound and a jaw-dropping ending. Directed by Alberto Cavalcanti, Charles Crichton, Robert Hamer, and Basil Dearden, this English film has had a troubled past, with segments chopped out for various releases and falling out of print, but it has been recently restored to its full glory, with beautiful image and sound.

In this great black-and-white, widescreen film by Japanese director Kaneto Shindo, a woman, Yone (Nobuko Otowa) and her daughter-in-law, Shige (Kiwako Taichi) are killed by a band of samurai soldiers. Later, their ghosts take revenge by luring traveling samurai to a beautiful, spectral house, plying them with sake, and killing them. But when a young warrior (Kichiemon Nakamura) is sent to stop the ghosts, he finds something surprising. Kuroneko (1968)—the title translates to “black cat”— uses its wide frame with amazing precision, from the rooms of the ghostly house to the bamboo woods where the ghost women find their victims; not a single thing feels out of place or unnecessary. While the movie isn’t exactly terrifying, it does have its share of unexpected moments to make you gasp.

See also director Shindo’s equally good horror movie Onibaba (1964), about a mask that might be haunted, and Masaki Kobayashi’s essential and scary anthology film Kwaidan (1964), both also available on the Criterion Channel.

Hour of the Wolf

It’s hard to believe that Ingmar Bergman, that master Swedish filmmaker of wintry, inner-torment classics ever directed a horror movie, but here it is. And Hour of the Wolf (1968) is plenty spooky, too. Max Von Sydow stars as Johan Borg, a reclusive artist who retreats with his wife Alma (Liv Ullmann) to a remote island to work. Creepy “neighbors” begin to bother him, but are they real? And if they are phantoms of his mind, why can Alma see them too? Some of images, such as a young boy staring at Von Sydow as he’s fishing, will haunt you long afterwards.a

The film is told in flashback, from Alma’s point of view; she speaks directly to the camera, and “film crew” noises can be heard during the opening credits, reminding us from the start that it’s only a movie. It is said that Bergman was inspired by some of his own actual nightmares.

Night of the Living Dead

Due to an error, George A. Romero’s Night of the Living Dead (1968) was never legally copyrighted and is now available free in many places, but the Criterion Channel offers a beautiful restored edition, created for its 50th anniversary, and Kanopy and Shudder offer sharper, cleaner transfers as well. One of the greatest movies ever made, it established the zombie genre that thrives today, including throngs of slow-moving zombies (much scarier than fast-moving ones).

On another level, it provided a microcosm of social unrest prevalent in the country at the time, with an African-American character (Duane Jones) taking charge of the survivors trapped inside the house. Among them are Barbara (Judith O’Dea), who becomes nearly catatonic with fear, and the angry, ineffectual Harry Cooper (Karl Hardman). Even after all this time, the movie masterfully balances canny character development among the humans inside, and a menacing, encroaching horror outside.

Mario Bava was the premier master of Italian horror, crafting a series of moody, visually rich low-budget shockers, including an early slasher movie, Blood and Black Lace, and inspiring many followers, such as Dario Argento. But he outdid himself with Bay of Blood (1971), sometimes shown under its alternate title, Twitch of the Death Nerve, with the incorporation of more intense gore and nudity.

It’s said that films like Friday the 13th were directly influenced by this one. A group of frolicking young people arrive at a lake for a little fun, only to start dying off one by one at the hand of a vicious, mysterious killer. Bava’s normal use of bold colors is effectively combined with a more naturalistic look, the early, innovative gore effects are still pretty shocking (one particular impaling is now legendary), and the whodunnit aspect is surprisingly clever.

After two arty college films, David Cronenberg made his real debut with this low-budget grindhouse classic, already showing his mastery of the medium, and his obsession with all things related to the body. Shivers (1975) takes place in a modern-day high-rise, where residents have everything they need and never need to leave. (Cronenberg makes the building itself feel strangely futuristic and oppressive.)

It’s just not Halloween without John Carpenter’s innovative and startling Halloween (1978), or at least without a blast from the legendary synthesizer score he composed himself (in, apparently, three days). Carpenter’s sinister widescreen cinematography takes advantage of straight-cut suburban landscape, using tall shrubbery or clotheslines as deceptions, and its concept of a killer of pure, simple evil—known as “The Shape” as well as Michael Myers—still strikes a dark chord.

Jamie Lee Curtis is the iconic “final girl” Laurie Strode; Donald Pleasence is Dr. Loomis, full of foreboding; and P.J. Soles is the flirty Lynda. The film is essential viewing, and while its many sequels are not quite as essential, they do still offer a measure of fun. Shudder subscribers can stream a triple feature of the original, plus Halloween 4: The Return of Michael Myers (1988) and Halloween 5: The Revenge of Michael Myers (1989).

Don Coscarelli’s Phantasm (1979), may be short on budget but it’s long on imagination. Thirteen-year-old Mike Pearson (A. Michael Baldwin) lives with his grown-up older brother Jody (Bill Thornbury) after the deaths of their parents, and fears that Jody will go away and leave him behind. He begins visiting a cemetery where he sees strange things, such as a Tall Man (played by the wonderfully named Angus Scrimm) singlehandedly lifting coffins; small, hooded creatures like demonic Jawas; a silver ball that flies through the air, attaches itself to people’s faces, and sprays blood everywhere; and a portal to another planet.

Reggie Bannister plays “Reg,” the ice-cream man who offers a helping hand as well as some comic relief. It’s easy to see how early viewers may not have been able to decide what to make of it all, but it has become a cult classic in the years since. In 2016 it received a much-needed restoration and re-release, and now has a home on Shudder.

The same year he made a huge paycheck for writing Lethal Weapon, Shane Black also co-wrote this comical combo of a Goonies-like kid adventure and a tribute to the Universal monsters. Directed by Fred Dekker, The Monster Squad (1987) is ridiculous, but it does resonate with viewers of a certain age; and it might again with younger fans of Stranger Things.

Apparently, one day in every century, an amulet of pure good becomes vulnerable, and Count Dracula (Duncan Regehr) intends to destroy it and create chaos, with the help of the Mummy (Michael MacKay), the Gill-man (Tom Woodruff Jr.), and the Wolf Man (Carl Thibault). The Frankenstein monster (Tom Noonan) winds up helping the kids, who have formed their own monster club, and are the only ones who can save the day.

Horror writer Clive Barker made huge waves in the 1980s with the release of his seminal three-volume collection of short stories, The Books of Blood, and it wasn’t long before

movies based on his work followed. While the Hellraiser movies are the most notable, Candyman (1992) has also held up quite well, thanks to its sophisticated filmmaking and thoughtful casting, and especially its high-class music score by Philip Glass.

Virginia Madsen plays Helen Lyle, a sociology student researching urban legends. She goes to a graffiti-ridden housing project to investigate the legend of the Candyman; it is said if you say his name five times while looking in a mirror, he will appear and kill you. Of course, someone actually tries it. Kasi Lemmons, who went on to become a director, plays Helen’s skeptical friend Bernadette, and Tony Todd has become something of a horror icon for his suave performance as the title character.