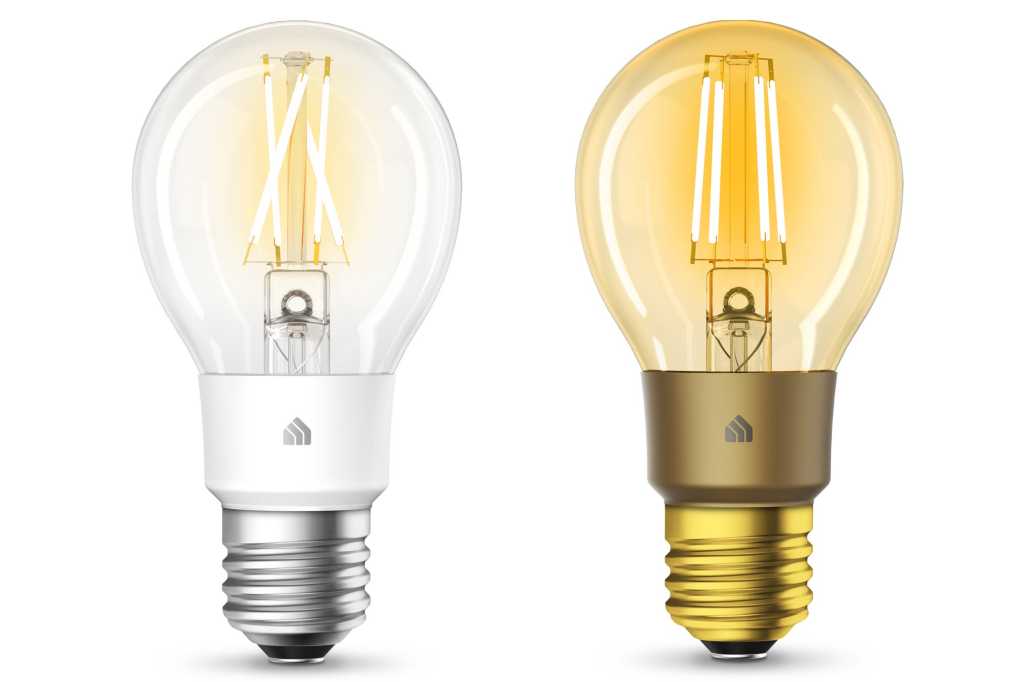 TP-Link’s new Kasa Smart filament LED smart bulbs look like they could have been props in the Benedict Cumberbatch movie The Current War, which explores the rivalry between electricity pioneers Thomas Edison, Nicolai Tesla, and George Westinghouse.

The filament LED bulbs will be available in two configurations, both of which are dimmable. The KL50 Kasa Vintage LED Filament Bulb features a traditional Edison-style bulb design with crisscross strips of LEDs inside a clear glass globe. It has a white insulator and a silver E26 base. Producing 600 lumens of soft white light, it should serve as a good general-purpose light source in luminaires that leave the bulb partially or fully exposed.

The KL60 Kasa Vintage LED Filament Bulb features the same style of globe, but it has vertical LED strips mounted inside amber glass above a similarly colored insulator and E26 base. This one generates only 450 lumens, so it would be more appropriately deployed as an accent light; again, inside a type of luminaire that lets you see the bulb itself.

The KL50 and KL60 are available now for $16.99 each. They connect directly to your Wi-Fi network, so they don’t need a bridge or a hub for control for you to them with the Kasa Smart app on your mobile device, whether you’re home or away. The bulbs are also compatible with Amazon Alexa and Google Assistant, so you can manage them using voice commands if you have a compatible smart speaker.

TP-Link is also jumping into the LED light strip market with the Kasa Smart KL430 Kasa Smart Multicolor Light Strip. This 80-inch-long adhesive-backed light strip can produce millions of colors and can be divided into 16 zones—with each zone being five inches long—so you can assign a different color to each zone.

Should you find the strip too long, you can trim it by cutting at designated spot. If it’s not long enough, TP-Link will offer one-meter extensions (model KL430E) as an accessory. The extensions enable the light strip to be extended up to 33 feet. The KL430 Kasa Smart Multicolor Light Strip is available now for $69.99, and the KL430E extensions will cost $24.99 each when they ship in December.

Like TP-Link’s other smart bulbs, the light strip connects directly to your Wi-Fi network and is compatible with Amazon Alexa and Google Assistant.