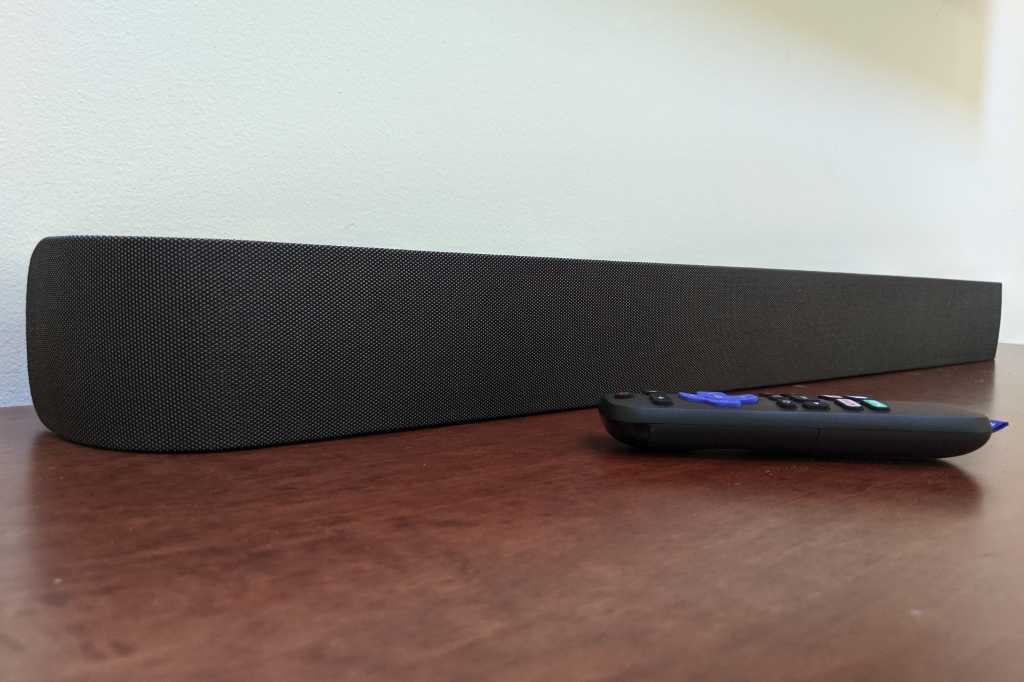 Roku’s streaming TV soundbar doesn’t win on audio quality or extensibility, but its speech enhancements sure come in handy.

The Roku Smart Soundbar won’t appeal to audiophiles. This $180 speaker—Roku’s second audio offering after its Roku TV Wireless Speakers—delivers only middling sound quality, and there’s just one opportunity for reinforcing its sonic performance. The feature that saves this speaker is its ability to also serve as a Roku streaming TV player, reducing the clutter around your TV—and the remote controls you’ll need to keep track of.

That audio reinforcement opportunity comes in the form of Roku’s wireless subwoofer, which also costs $180, but there’s no option for true surround sound, let alone immersive audio formats such as Dolby Atmos or DTS:X. The soundbar can’t be incorporated into a multi-room audio system via Apple AirPlay 2, Amazon Alexa, or Chromecast Built-In, either.

As a media streamer, the Roku Smart Soundbar offers the same simple interface and broad app support as Roku’s standalone players. Even better, Roku provides quick and convenient access to audio settings that can boost bass, limit loud sounds, and—most importantly—enhance the volume of speech. Other soundbars don’t always offer those options, and when they do, they make you reach for their own remote to access them.

What Roku offers here is a pretty decent and affordable soundbar for anyone who’s also in the market for a new streaming player, and especially those who prefer Roku’s simple and utilitarian streaming TV platform.

The Roku Smart Soundbar measures 32.2-inches wide, 2.8 inches tall, and 3.9 inches deep, and it comes in a black plastic enclosure with a fabric speaker cover that wraps around the soundbar’s sides. It’s a bit on the tall side for a soundbar, so you’ll want to measure the height of your TV’s built-in stand (if it’s not wall mounted) to make sure the bottom of the TV clears the soundbar’s top edge. (The soundbar itself has a pair of mounting sockets if you’d rather not plunk it on an entertainment center, but you’ll need to buy the mounting brackets separately.)

Around back, the Roku Smart Soundbar has an HDMI port (with ARC support), optical audio input, and a USB port for playing local media files. There’s no analog 3.5mm input for plugging in an external audio device, such as your phone, but you can connect devices over Bluetooth.

Inside, the soundbar has four 2.5-inch full-range drivers, and Roku says its amplifier produces maximum power of 60 watts (36 watts RMS), which puts it at the lower end of the spectrum for a soundbar.

Roku, meanwhile, will not disclose the soundbar’s frequency range, which—along with my listening experience—makes me suspect it’s nothing to boast about. While watching the nightclub action scene in Black Panther, the sound of gunfire became muddled at high volumes, and I noticed a lack of high-frequency response from the scrapes and slashes of Okoye’s spear.

That same lack of high-end clarity became apparent while blasting Jacob Mann Big Band on YouTube, with the horn section in particular missing the kind of brightness you’d get from higher-end speakers. Cranking up the volume also introduced some noticeable distortion. To be clear, though, the soundbar is still a big upgrade over your typical TV speakers.

As you might expect, the Roku Smart Soundbar doesn’t provide much low-end oomph either, but you can rectify this matter by adding a wireless subwoofer, which costs another $180. It’s outfitted with a 10-inch driver and an amplifier that can produce maximum power of 250 watts (125 watts RMS). Roku says its capable of reproducing low frequencies down to a respectable 40Hz.

The subwoofer is dead-simple to set up—just hold the Roku remote’s home button for a few seconds to bring up a pairing menu, and then select “subwoofer” from the list. It also sounds great, adding a big punch to action movies and music without sounding muddy. The only notable downside is that at 12 inches in each dimension, you can’t easily fit the woofer behind or underneath a sofa.

Even with the soundbar and subwoofer, you’ll miss some elements that other systems offer. Roku doesn’t sell satellite speakers to create a 5.1 surround sound system, nor does it tie into any multi-room audio systems, so you can’t play music in sync with any other speakers in the home. You also can’t tap into Chromecast Built-in or AirPlay 2 to launch music from a mobile device over Wi-Fi, and this isn’t a smart speaker—like the Sonos Beam or Polk Command Bar—that has Alexa or Google Assistant built in.

One other thing to note: Walmart sells its own version of Roku’s soundbar under the retailer’s “onn” brand. It costs $50 less, but doesn’t include a voice remote. A Walmart-branded subwoofer is also available for $130, but with a much lower maximum power of 150 watts. We have not reviewed these Walmart-specific variants.

Now that we’ve firmly established that the Roku Smart Soundbar isn’t for audio obsessives, here’s why it might appeal to everyone else: It’s really easy to fine-tune the sound based on what you’re doing.

While Roku does not offer granular equalization settings—yet another knock for audiophiles—it does offer four levels of bass, two levels of boosted speech clarity, a leveling mode that compresses loud and quiet sounds, and a “night” mode that keeps the volume from getting too loud. Those controls are all easily accessible by pressing the remote’s star button, which brings up a control overlay on top of whatever video you’re watching through Roku’s system.

As a parent of young children in a house where sound carries pretty easily, the Roku Smart Soundbar is a huge help in this scenario. By boosting dialog and enabling night mode, I can watch TV without having to constantly wrestle with volume levels.

The only caveat is that those controls aren’t as easily accessible with other inputs, such as a game console or cable box. While the Roku Smart Soundbar will carry whatever sound profile you’ve chosen over to these inputs, you’ll have to switch back to the main Roku menu to change audio settings, which is inconvenient.

The main reason to buy the Roku Smart Soundbar in the first place is that it’s more than just a soundbar. It’s also a full Roku 4K HDR streaming player that operates on the same input you use for the HDMI-ARC audio connection.

In terms of capabilities, the Smart Soundbar is somewhere between Roku’s $60 Streaming Stick+ and $100 Roku Ultra. It has a USB 2.0 port for local media playback, and a mute button on its remote control, but it doesn’t have an ethernet port, microSD card slot, or a remote-finder function. It also lacks the slightly faster app loading and programmable keys of the latest Roku Ultra, and it doesn’t have a headphone jack on its remote for private listening. (As with other Roku players, you can still listen with headphones through your smartphone using the Roku mobile app.)

Like other Roku players, the Smart Soundbar presents a simple interface for accessing streaming apps such as Netflix, Amazon Prime, YouTube, and Hulu. Apps load quickly and run smoothly, and pretty much every major streaming service you might want is available on the platform. Roku even surfaces lots of free movies and shows through the “Featured Free” section of its home screen, and it offers more free content through The Roku Channel, which is not available on other streaming players today.

As I’ve written in other Roku reviews, I do wish the platform was better at surfacing and playing content from across different sources. While you can use the Roku remote’s microphone button for universal search, there’s no quick way to resume shows you’ve been watching lately without diving into individual apps. Roku is also behind Amazon Fire TV and Apple TV in voice controls, offering no way to launch live TV channels by voice in services like Hulu, PlayStation Vue, or AT&T TV Now.

Likewise, you can only use Roku’s voice remote to initiate music playback in Pandora, iHeartRadio, and TuneIn. For other apps such as Spotify and Amazon Music, you’ll have to thumb through menus on the remote, and Roku doesn’t offer any apps for Apple Music, YouTube Music, or Google Play Music, leaving Bluetooth as your only option for those services.

For all those reasons—along with the limitations on the audio side—the Roku Smart Soundbar is not the ultimate hybrid of streaming box and sound system. It is, however, a fairly inexpensive way to upgrade your TV’s audio and streaming capabilities all at once.

While you could always just buy your soundbar and streaming box separately, you’d be missing out on the convenient dialog boosting and other easy audio enhancements that the Smart Soundbar offers. If you’re not an audiophile, maybe that’s all you need.