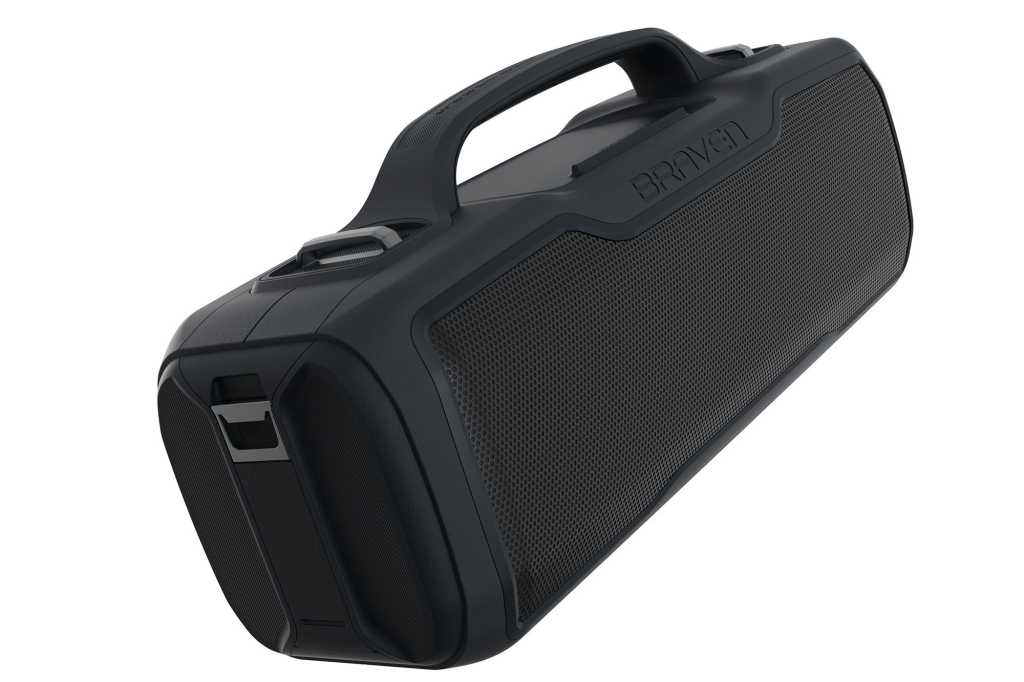 Image: Zagg
At a Glance

The Braven BVR-XL tough Bluetooth speaker made for a life on the road. It sounds considerably better than the average waterproof speaker, especially on the low-end, and it has all-day run time.

Yet I found its heft to be part of its charm, and manufacturer Zagg has designed in both a handle and shoulder-strap mounts (the strap comes in the box) to mitigate the tough lugging. And for instant gratification when you get where you’re going, there’s an honest-to-goodness bottle opener on one end. For whatever reason, the words “Rocky Mountain Tested” are embossed in the top of its enclosure.

Despite what I said, you shouldn’t be too concerned about hauling the Braven BRV-XL around. I brought it home in my backpack for my extended listening tests, and I forgot it was there. I quite often stuff heavier things in my bag, and I spent most of the trip on the bus, so the 15.17-inch-wide, 4.9-inch-deep, 6.89-inch-high, and 6.89-pound speaker didn’t have much time to weigh upon me.

One end of the BVR-XL is home to the aforementioned beverage leverage. Tugging on it pops off a cover that protects a USB charging port for your smartphone, an auxiliary audio input, and the charging point for its own battery. This action requires a bit of force, more than I thought it would, so don’t be shy the first time you try it.

The other end of the unit is home to the power, Bluetooth pairing, and volume up/down buttons. Long presses on the latter controls will skip forward and backward on your playlist. Speaker grills are mounted on both sides of the enclosure, but the active drivers face outward from the side with the logo. Passive radiators spill bass out the back of the unit.

The BVR-XL carries an IPX5 rating, which means Zagg makes no claim for protection from particulate incursion, but warrants the speaker to be protected from water sprayed from up to a 6.3mm nozzle. So it’s not submersible, but it should withstand being hosed down with no ill effect. Dust is no more invasive than water, however, so the BVR-XL is likely almost as dust-proof as it is weatherproof. After driving though both a thunderstorm and a dust storm on a cross-country trip, guess which I was still finding in odd spots about my car two years later.

An astute reader recently pointed out that I’ve never explained the whole IP rating thing. IP stands for Ingress Protection, and is occasionally referred to as International protection as the standard is cared for by the International Electrotechnical Commission. The first number represents resistance to mild physical stuff, such as small rocks, fingers, forks, and particulate matter; i.e., the aforementioned dust and dirt. An X in place of a number, as in IPX5, means nothing is promised because there’s no data for it. It doesn’t mean it isn’t rugged or sealed, it just means that it wasn’t tested.

The second  number represents moisture, as in the stuff you find in pools, the ocean, and dropping from the sky. A code up to 6 means various forms of non-immersive protection, 7 and 8 cover immersion (up to or more than one meter respectively), and 9K is the big daddy, meaning a device can withstand exposure to high-temperature, high-pressure water and steam jets. This is all within reason of course, and not to industrial scale.

I tested the all-black version of the BVR-XL. It’s also available in gray, but I’m a fan of bright colors with outdoor equipment. It’s hard not to notice something electric orange when you’re packing up the campsite. Just throwing that out there for Zagg.

The claimed run time for the BVR-XL is 16 hours which is just about what I saw in my testing.

Waterproof speakers tend to sound more muffled than other types, simply because of the materials and construction techniques that are used by necessity. The BVR-XL is among the best I’ve heard in the category, if not top dog. Indeed, I didn’t really think “weatherized” when I first turned it on. That’s a rarity.

The speaker is forward-firing, without porting, but still manages to deliver quite a bit of thump. I like bass, I just don’t like it as much as subwoofer aficionados. To me, the BVR-XL nails it, walking the line between party and serious listening.

When it comes to clarity, the mids are just a tad squelched in higher registers, and there’s not a lot of sparkle at the top. But that’s in comparison to much more expensive and non-weatherproofed speakers, as well as the ideal. I’d have no trouble listening to these around the pool, at the beach, or at the campground (not in the deep woods, thank you; that’s where people go to get away from this stuff).

The BVR-XL is well suited to it’s role as a ruggedized outdoor speaker that delivers low-end bump. It’s not for audiophiles, but it sounds good enough that I still enjoyed the listening experience over a couple of hours at low volume in my office. It’s hefty, but in the best possible way.  Now if you’ll excuse me, it’s time to have a beer and pump some iron the Rocky Mountain Way.

This article was edited on December 4th, 2019 to reflect disambiguation of the IP acronym with information provided by the International Electrotechnical Commission and correct “International Protection” to “Ingress Protection”.