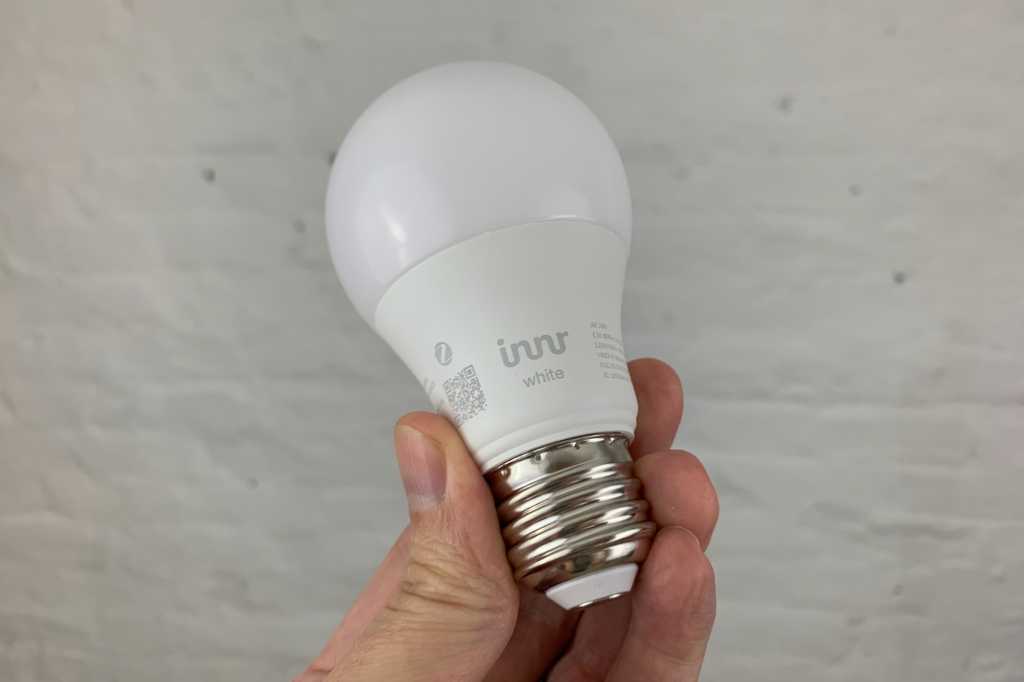 Those looking for an inexpensive way to fill out their smart bulbs within the Philips Hue ecosystem may well gravitate toward Innr, a smart lighting brand that offers a variety of budget-priced, Zigbee smart lights that will connect to the Hue Bridge.

Among Innr’s various lighting products are these dimmable warm-white A19 bulbs, which are compatible with most Hue room-grouping features and routines and can be controlled via the Hue app, same as with standard Hue bulbs. The bulbs are also compatible with other Zigbee smart hubs, including SmartThings, Homey, and Amazon Echo devices with built-in Zigbee hubs.

At $36 for a four-pack (which comes out at a reasonable $9 a bulb), Innr’s A19 bulbs are considerably less expensive than an equivalent four-pack of dimmable-only Hue White bulbs ($45, or $11 a bulb), making them a tempting choice for anyone who wants to fill in the gaps of their Hue bulb collection without breaking the bank. Indeed, I was among those who did just that, adding about a dozen Innr A19 bulbs alongside the other Hue lights in my Brooklyn apartment.

When I first wrote this review back in the fall of 2019, I called the Innr bulbs “sturdy and (thus far) reliable.” But after more than two years of use, I’ve noticed increasingly spotty performance from the bulbs. Ultimately, I opted to go back to first-party Hue lights, which have proven to be far more reliable.

I have not tested the Innr bulbs with a SmartThings hub or a hub-equipped Echo speaker, so it’s certainly possible that the bulbs perform better with those Zigbee devices. But if you’re primarily interested in Innr’s A19 bulbs as Hue replacements (as I suspect most users are), I’d advise you to think twice.

On the plus side, getting the Innr bulbs up and running on my Hue Bridge was a snap. Once I screwed in the light bulbs (which are compatible with standard E26 sockets) and powered them on, the Hue app found the bulbs within seconds, and … well, that was all there was to it, no need to enter serial numbers or deal with elaborate workarounds.

Next, I tried connecting the Innr bulbs to the TP-Link Deco M9 Plus, a mesh router that doubles as a Zigbee hub. Again, I had no trouble, with the router adding the four bulbs to its list of connected smart devices in seconds. (I don’t own a SmartThings hub, nor a hub-equipped Echo speaker, so I wasn’t able to test the Innr bulbs with those devices.)

Connecting the bulbs to Amazon Alexa and Google Assistant was equally seamless, and soon I was commanding Alexa and Assistant to turn “Dimmable light” 1 through 4 on and off, or “Downstairs lights” once I’d added the Innr bulbs to a room in the Hue app. Keep in mind, however, that neither Alexa nor Google Assistant can control the Innr bulbs without help from a bridge. There’s also no Apple HomeKit support, period.

Using the Innr Smart White A19 bulbs within the Hue app was practically the same experience as you’ll have controlling Hue-branded bulbs with the app. While you can’t change the color or color temperature of the 2700K warm-white Innr bulbs (the same goes for non-tunable Hue White bulbs, as opposed to pricier Hue White Ambiance bulbs), you can dim them using the Hue app, and the standard Hue scenes (Bright, Dimmed, and Nightlight) for dimmable but non-tunable bulbs are available.

There are a few Hue features that the Innr bulbs don’t support at all. Among them is the “Power-on behavior” setting, which lets you determine the color temperature and/or brightness of a light when it’s powered on or after a power loss. You also can’t use Innr bulbs in Hue “Entertainment” areas, nor do they support Hue’s animated candlelight and fireplace modes.

Performance with the Hue Bridge

As I’ve already mentioned, I never got the chance to test the Innr A19 bulbs with SmartThings, a Homey hub, or hub-enabled Echo devices. If you plan to use the Innr bulbs with one of those hubs, you may well experience better performance than I did.

But after more than a year of testing, I’ve found that the Innr bulbs connected to my Hue Bridge have become increasingly flaky. While they haven’t all failed at once, there’s often a single bulb in a group that fails to turn on with the others–or, if it does turn on, it only goes to (say) 50-percent brightness when it should be turned up all the way. Re-pairing a wayward bulb sometimes fixed the problem, but then another bulb would begin acting up, making me feel like I was playing an endless game of Whack-a-Mole.

After resetting and re-pairing all of my Innr bulbs at one time or another, I eventually resigned myself to their erratic behavior, and recently I’ve been replacing them with genuine Hue bulbs, which have demonstrated fast and rock-solid performance in comparison.

They say that you get what you pay for, and my experience with Innr’s A19 smart bulbs is a case in point. While they’re less expensive than comparable Hue White bulbs, they’re also far less reliable, at least when used with the Hue Bridge. Again, however, your mileage may vary with other Zigbee hubs, such as SmartThings or Amazon’s Zigbee-enabled Echo speakers.

Updated February 23, 2022 with more details on performance and a new rating, following additional testing. Updated again on March 29, 2022 to note that I tested the bulbs for more than two years, not just 18 months.