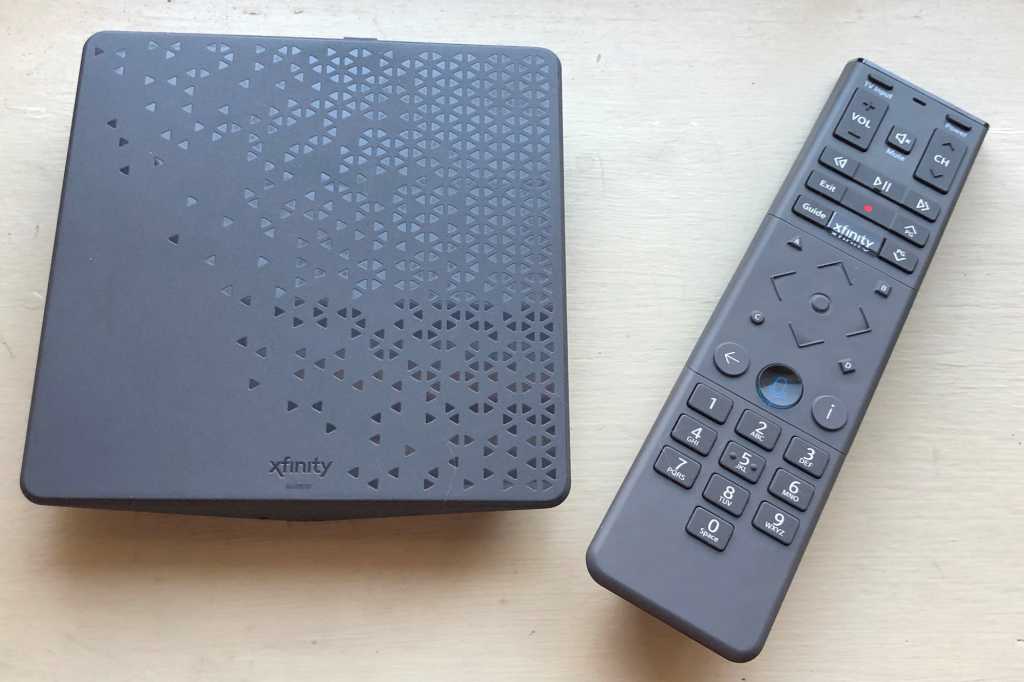 Xfinity Flex isn’t the right streaming box for everyone, but nothing says value quite like “free.”

Media streaming boxes just keep getting better and cheaper, but nobody else has matched the “absolutely free” pricing of Comcast’s new Xfinity Flex. Exclusively available to cord-cutters who pay Comcast for broadband but not TV, Xfinity Flex consists of a 4K-capable set-top box and a competent, voice-activated, RF remote control to serve up subscription and ad-supported video and music programming.

Comcast is currently providing just one free Xfinity Flex per qualifying household (and the company is cagey about revealing just how many of its 26 million Xfinity internet customers qualify), but you can rent second and third boxes for additional TVs at a cost of $5 per month each.

But before you get too excited, know there are some big missing links in Comcast’s service offerings. At present, Xfinity Flex doesn’t play at all with Hulu, ESPN linear channels, Disney-branded services, CBS News 24×7, CBS All Access, nor with cultural exotica like the English-language NHK World from Japan that’s near and dear to my heart (and which is available on rival platforms including Apple TV, Fire TV and Roku).

Also missing from Flex are such music titans as Spotify, the most popular of streaming music service; global internet radio aggregator TuneIn, which is 10 times better than the iHeartRadio app that is supported; and satellite radio biggie Sirius/XM.

Because it’s a secured component of your internet service, Flex can also monitor and control aspects of your home network, although some of those features require a paid subscription. With the Flex’s user interface displayed on your TV, for example, you can track network clients and schedule when they have access. This would be useful for managing the screen time of your little ones, so they’re not spending hours at a time playing video games or watching YouTube videos.

Sign up for Comcast’s Xfinity Home, which costs $40 to $50 per month on top of your broadband access, and Flex can incorporate smart-home features on your TV screen, such as streaming video from your security cameras, as well as offer on-screen controls for your smart lighting, thermostat, and other smart-home devices.

Should you ever decide to beat a retreat from cord-cutting, Flex is built on the same X1 platform developed for Xfinity cable TV. As such, the box can be upgraded to deliver a full panoply of traditional cable channels and services, including the enriched X1 on-screen program guide and the ability to store content in the cloud for time-shifted viewing.

Shipped to your door, not brought by a technician, a pre-programmed Xfinity Flex already knows your Comcast account details and will automatically sniff out and self-install on your Wi-Fi network. If you have the infrastructure for it, you can alternatively hardwire the Flex to your router with an ethernet cable.

The Flex remote is likewise smarter than your average bear. When I plugged the Flex into my LG 65E6P OLED smart TV using the box’s only functional HDMI port (which doesn’t support ARC, but is CEC friendly), the Flex recognized the TV and automatically programmed the remote control so its power and volume buttons controlled the TV. The same remote buttons can do double duty to power up a connected amplifier or A/V receiver, although that does require user intervention to provide the brand and model information.

I found the Flex’s picture and sound quality to be first rate watching HD and ultra-high definition content, although you’ll want robust broadband service for the latter. It’s generally recommended to have an internet connection that delivers at least 25Mbps for 4K streaming—and you’ll want more than that if other people in the home will be online at the same time. To see how whip-fast content can change on the box, click on the music-video channel Xite. “Next track” delivery takes barely a second.

4K content on Netflix and Amazon sometimes looked almost too sharp and grain-free, underscoring the preponderance of movies being shot at least partly on video. There’s support for HDR10 high dynamic range, but you’ll need to wait for an update to get Dolby Vision. On the audio side, Flex will pass Dolby Atmos to an A/V receiver connected via HDMI. Connect the box directly to a TV and then tap audio via the telly’s optical out, and you’ll need to settle for a stereo signal that can then be subdivided by a receiver in a matrix surround format like Dolby Pro Logic II.

The Flex’s on-screen guide has a designed-by-committee feel. Channel surfers can approach and ride the waves in a mind-boggling variety of ways, but there were times when I felt I was drowning in the thousands of shows on offer—at least until I found my sea legs.

Pressing the Guide button on the remote brings up an unusually abbreviated grid that starts with 28 available pay channels from HBO, Cinemax, Epix, and Showtime. It then lists a mere 11 free channels, leading with Comcast’s newly acquired Sky News channel from the U.K.. It then froths it up with the likes of three shopping channels, ESPN 3 (one of just two part-time ESPN offerings), the foodie service Tastemade, and the stupid-human-and-pet-trick channels Fail Army and The Pet Collective. Comcast’s ad-supported Peacock service with programming from NBC will be nesting here, too, when it launches next year.

Tapping the button labeled “Xfinity” on the remote opens the homepage and floodgates. Scroll down and you can cut paths through the vast universe of streaming channels nine different ways.

For starters, the top line shows “recently watched” content, helpful for resuming same. Next comes a string of hot buttons devoted to Free to Me content (except when it costs), Live TV, New, Music (which includes podcasts), and Today—which offers local time and weather and the aforementioned home-network management features.

None of that is to be confused with the next, smaller-type-faced line (six) of tap-on bugs, which open Movies and TV series culled by source and genre, Apps, Purchases, and Favorites. Are there no other descriptive words designers can use to define and subdivide the wild west environment of streaming TV?

Another content line billed “Set your Ambient Mood” serves music and imagery to score your “Wake Up and Shine,” “Doing Chores,” “Brunch Pop,” and “Studying Beats.”

At the bottom of the menu, yet another string of tap-on words open search, your account, settings, and help. Incidentally, the help option came in particularly handy when I needed to reset the box to cure a mysterious purple-screen problem. I initially speculated the cause was the High Speed HDMI cable that Comcast supplied. 4K products normally ship with—or at least recommend using—higher-bandwidth Premium High Speed cables. But Comcast told me it had isolated and fixed the purple-screen bug with a software update and that the cable it supplies is just fine. Fingers crossed.

But wait, there are even more ways to skin this cat! For my needs, tapping the Live TV hot button atop the homepage worked best, culling curated program picks in a dozen categories and multiple types, from news and sports to comedy and family content.

Is your head spinning from all this? Mine was for about a week, until I figured out where to look and who to trust. My confusion was amplified by the propensity of the Flex’s browser lists to change as I added and subtracted services. The somewhat misleadingly billed “Free Movies” tab, for example, includes the subscription-based Netflix, Amazon Prime Video, and Showtime offerings, alongside stuff from ad-supported channel aggregators Pluto, Xumo, and my new fave Tubi (cool vintage content, fewer commercials.)

Paid on-demand options also pop up in the “free” zone. When last I shopped, Spider Man 3 was free with an Amazon Prime subscription, but it could also be had on demand with Epix ($5.99 per month) or Showtime ($12 per month) subscriptions, as a $4.99 rental from Comcast’s Streampix service, or purchased outright from Sony for $12.99.

Stuffing a million pounds of programming into a ten-pound sack is sometimes more than this nascent service can manage. While searching for the remastered Robert DeNiro/Jodi Foster classic Taxi Driver, and then the apropos-of-something The Whistle Blower, I found fewer options on Flex than I did searching for the same movies on a Roku streaming box—and the choices Flex did surface were more expensive. I’ve also been spoiled by the straightforward logic and simplicity of the Roku platform, which doesn’t make you dig deep into a channel aggregator’s stockpile to ferret out a subscription-based Comedy Central, MLB.TV, or Broadway HD.

Searching for content by voice request (naming a title, actor, director, or musical artist or song) is the simplest, fastest way to find content on Flex. The search engine is building on the billions of voice requests already issued on X1 remotes by Comcast Xfinity cable TV customers.  And the system is pretty good at finding affinity programming—those watch-this-next suggestions to keep you in the neighborhood.

On the downside, the AI in Flex is hardly infallible or complete, veering mostly to YouTube, Netflix, and Pandora content. My spoken bid for the very first James Bond film Dr. No led Flex on a fruitless quest for Doctor Know. My charge to find “the new Miles Davis album” brought up (I kid you not) The Three Stooges Family Album. (Davis’s posthumous release is called Rubberband.)

Spoken song and artist requests addressed to iHeartRadio and Amazon Music mostly came to naught, with an on-screen apology and “try again later” message. And some crazy content-skipping/flipping/hiccuping stunts occurred when I tried to switch between music and a video source. The next Flex software upgrade will eliminate these kinks, I’ve been promised (here’s hoping it won’t erase The Kinks as a side effect. Ba-dum ching).

Comcast’s streaming-media rivals have had a decade or more to polish their presentation, so for a box that launched in beta at the end of 2018 and is only now being rolled out nationwide, Xfinity Flex is already a relatively muscular offering. Just be prepared to deal with a few more growing pains and perhaps wait for your favorite services if you decide to take the plunge.