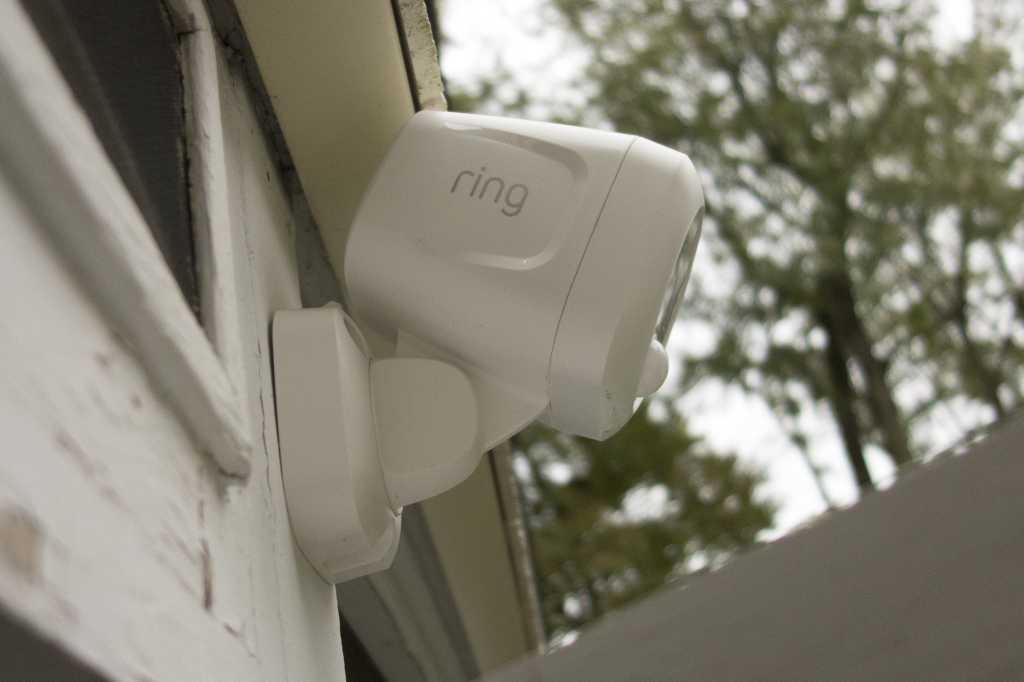 Image: Michael Simon/IDG
At a Glance

The Ring Spotlight Battery is the best place to begin if you’re looking to get started with Ring’s Smart Lighting system.

If you’re at all interested in exploring a Ring Smart Light setup at your home, the device to start with is the Spotlight Battery. While it has the same issues as the other members of Ring’s family of lights—disposable batteries, flimsy construction, and imprecise motion sensitivity—its size, brightness, and price make it a better all-around value than the Floodlight Battery.

The Spotlight battery is small enough to fit pretty much anywhere—unlike the Floodlight Battery’s protruding lamps, which require a bit more space—and shines bright enough to illuminate plenty of your yard or steps, and hopefully scare off intruders.

As you’d expect, Ring’s battery-powered lights don’t hold a candle to its wired ones, but where the Floodlight Battery is something of a disappointment, the Spotlight Battery shines. Literally. While the Floodlight Battery might have a higher total output (at 600 lumens vs 400 lumens), the Spotlight Battery’s bulb is 25 percent brighter than either of the single floodlight bulbs. That might not matter to a burglar, but it’s very noticeable when using it to illuminate steps or entranceways, particularly if there’s no other source of light around.

I also preferred its size to that of the Floodlight Battery. It measures just 3.82 inches across, far less than the floodlight’s 10.43-inch frame, so you’ll be able to place it basically anywhere. It has the same plastic design as the Floodlight Battery, which feels much cheaper than Ring’s camera-based products. As an owner of the Ring Video Doorbell Pro and Floodlight Cam, it’s a surprising downgrade and makes the Smart Lighting devices feel more like cheap imitations than extended members of the same family.

I mounted my review unit in the corner frame of a door leading to my backyard where the floodlight would have blocked the door from opening. Add in the fact that it’s $10 cheaper than the Floodlight Battery, and the Spotlight Battery is a no-brainer purchase.

Extra expenses (aka those damn batteries)

No matter which of Ring’s smart lights you start with, however, you’re going to incur extra expenses. For one, you’re going to need four D-cell batteries to power it, which is the biggest drawback to the entire Smart Lighting system. They add needless weight, recurring costs, and environmental unfriendliness, all of which shouldn’t be an issue in 2019.

Amazon sells a 12-pack for about $13, which Ring estimates will get you through three years. I obviously haven’t been able to test that, but my Ring app reads that both the Spotlight Battery and Floodlight Battery have drained 50 percent of their life in the three months they’ve been in use.

You’re also going to want to buy a $50 Bridge or one of the discounted bundles that includes one. (Ring sells a pair of Spotlights and a Bridge for $100.) Think of it kind of like the Ring Protect monthly service plan for its cameras. While you don’t technically need a Bridge for the lights to work—the Spotlight Battery still detect motion and light up—there’s really no point in having any of Ring’s smart lights without it. The Bridge enables the lights to communicate with the app, thus opening up all of the “smart” functions. Once you’ve bought one, however, you won’t need another, since the Bridge supports up to 50 lights.

Setup is extremely simple, even more so than Ring’s camera-based products. One the Bridge is plugged in, you’ll use the app to connect it to your Wi-Fi network and discover new lights. The whole setup takes less than five minutes, and adding new lights is even faster. Unlike the button on the Philips Hue Bridge that needs to be pressed whenever you’re setting up a new device, you won’t need to fuss with the Ring Bridge after the initial setup.

Since the Smart Lighting philosophy is about tethering, there’s an emphasis on creating and expanding groups. Figuring out all of the settings is a bit confusing, as both the light and the group have separate options, but you’ll be able to adjust motion sensitivity, light threshold, and duration, as well as link any cameras so they can start recording when motion is detected.

It’s easily the best reason to buy a Ring Smart Light over any other motion light, but it’s not as useful as it could be. For one, it requires a bit of location scouting, since recording by the doorbell won’t really matter if there’s motion in the backyard.

But even if your devices are within eyesight of each other, the integration still isn’t great. With just three settings for motion sensitivity, you’ll likely end up with a bunch of useless recordings each day, as I did. Even on the “Medium” setting, I got numerous alerts every day for things like shadows and wind, while switching it to “Low” barely registered anything.

Should you buy a Ring Spotlight Battery?

I’m still not totally sold on the the Ring Smart Lighting family, but if you want to get started, the Spotlight Battery is definitely the way to go. I’d recommend the two-light bundle with the Bridge for $100 that saves $30 over buying all three separately and is just $10 more than buying the Bridge and a single Spotlight Battery separately.

But while the lower price is intriguing and the Ring Bridge basically future-proofs your setup, the better long-term bet is the Spotlight Cam Battery. Yes, it’s significantly more expensive ($199) and requires a monthly subscription to enable video recording, but the design, construction, features, and settings make it an all-around better value.