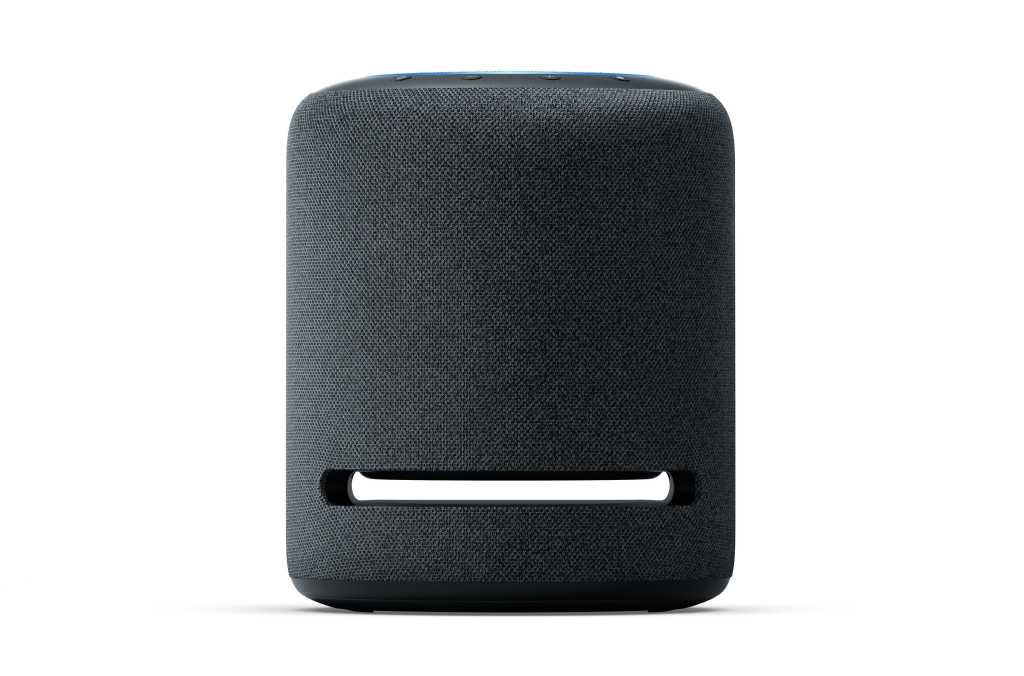 I’ve never considered any speaker that Amazon built to be of audiophile quality—or even something that would rival the likes of Sonos. The Amazon Echo Studio could change my opinion, at least as far as competing with Sonos. My first listening tests tell me it’s not an audiophile product, but it does sound very good.

The new speaker features three two-inch midrange drivers arranged around the sides of the round cabinet, a 1-inch tweeter firing out the top, and a 5.25-inch down-firing woofer in the base. Despite having ports on the front and back, above the woofer, an Amazon spokesperson told me this is a sealed design and that those vents are not actually bass reflex ports.

I’m waiting for clarification on the amplifier configuration, but I can report that the three sets of drivers are driven by separate Class D amplifiers producing peak power of 330 watts. Amazon says the speaker’s frequency range is 30Hz to 24kHz (no tolerance given).

There’s a 24-bit DAC on board for digital-to-analog conversions, and the system can decode tracks with up to 24-bit resolution and sampling rates up to 48kHz. A MediaTek SoC handles speech recognition, real-time room adaptation, with the onboard mics monitoring how the room responds to the speaker and making equalization adjustments to compensate.

The Echo Studio can be paired with the Echo Sub that shipped last year if you want even deeper bass response, and two Studios can be paired for left/right stereo listening. In this configuration, the two speakers will form a phantom center channel for 3D sound. I asked if it would be possible to add two additional Studios as true surround channels, and an Amazon spokesperson said that was under consideration, but there were no firm commitments to follow through.

Amazon demoed a single Echo Studio in a partitioned room with a ceiling (i.e., it wasn’t a conventional residential room with drywall), so the speaker’s real-world performance could be better than what I experienced. But I can say I was impressed with the performance considering the $200 price tag. The speaker delivered tremendous bass response, but not just bass. The mids were very present and the highs were crisp. It will be interesting to evaluate this speaker in my home theater, where I can make A/B comparisons to other speakers in and above its class.

The Echo Studio produces a very wide sound stage, but I didn’t perceive the enveloping 3D sound that was promised on the stage during the initial presentation, even though Amazon was playing tracks encoded in Dolby Atmos. Then again, I’m a dyed-in-the-wool home theater fan who’s never been satisfied with anything less than a discrete 5.1 audio system.

3D sound or lossless—you can’t have both

Speaking of Dolby Atmos: Amazon is making a lot of noise about Universal Music Group, Sony, and Warner Music remastering their music libraries in 3D sound. UMG and Warner Music are encoding in Dolby Atmos and Sony is encoding in MPEG-H, according to an Amazon spokesperson. The new Amazon Music HD streaming service will initially have about 1,000 tracks encoded in 3D, but these will not be exclusive to Amazon. Other services, such as Tidal, are expected to offer them as well. Amazon will just be the first.

The increased bandwidth needed to stream these tracks, however, is being consumed by the 3D audio encoding—you won’t be getting lossless audio. I’m told the Dolby Atmos tracks will stream at a maximum rate of 768Kbps, but the bit rate for Sony’s tracks is still TBD). A badge will appear in the Alexa app or the Amazon Music HD app you’re using to stream to identify tracks that are encoded in Dolby Atmos or MPEG-H.

Updated September 30 to correct an error in reporting the audio codec Sony is using and to subsitute “3D” for “surround” sound.