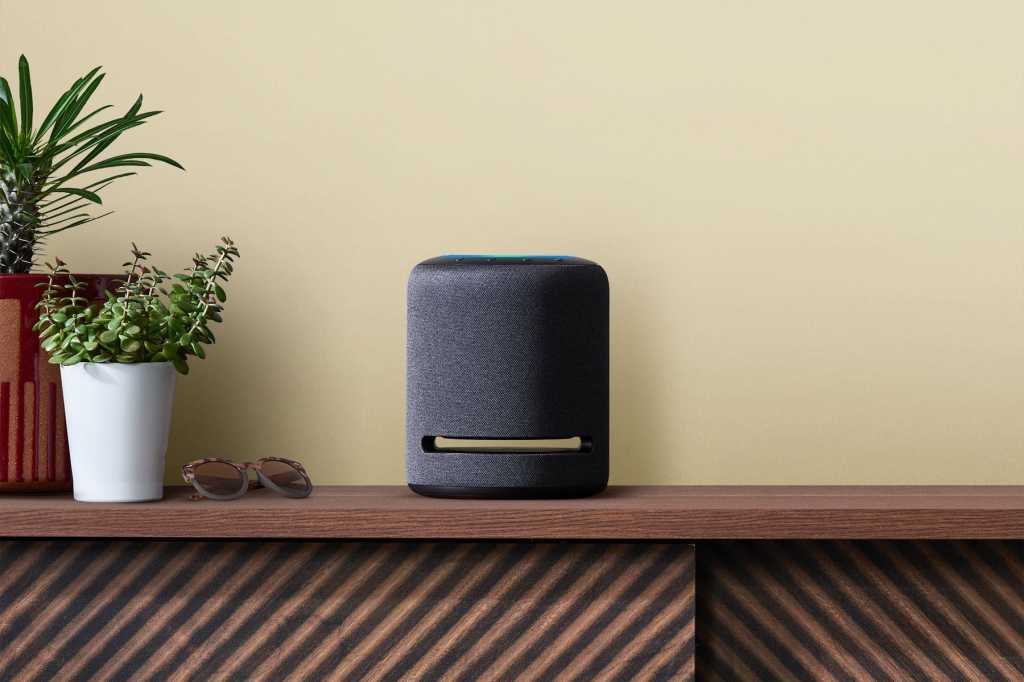 Amazon let loose with an avalanche of new products at its September hardware unveiling, starting with a series of new Echo speakers, including one with Dolby Atmos sound, as well as a pair of true wireless earbuds, glasses, and even a ring, all with—you guessed it—Alexa on board. Take a deep breath, then let’s dive in.

Boasting 3D audio and support for the object-based Dolby Atmos audio format, the Echo Studio is designed to automatically tune its sound to the shape of the room in which it’s sitting. You’ll also be able to connect the Echo Studio to a 4K Fire TV device, perfect for watching videos encoded with Dolby Atmos sound, and you can even pair two Echo Studios together with an Echo Sub.

Available for pre-order now at $199Remove non-product link, the Echo Studio comes equipped with three mid-range speakers in the left, right, and top of its housing, a front-facing directional tweeter, and a 5.25-inch bass driver.

Amazon made a move toward higher-quality audio this time last year when it introduced the Echo Sub, an inexpensive powered subwoofer designed to be paired with the 3rd-gen Echo Dot, 2nd-gen Echo, or 2nd-gen Echo Plus. The Echo Studio should appeal to the same consumers who purchased that speaker—namely, folks who are more deeply invested in quality audio and are willing to pay a little more to get it. Given its relatively low price point, the Echo Studio could very well give the likes of Sonos and Bose a run for their money.

Also coming soon: Echo Buds, a pair of truly wireless earbuds complete with active noise reduction courtesy of Bose, two balanced armature drives per earbud, a pass-though mode for Siri and Google Assistant, and up to five hours of battery life or 20 hours with help from the charging case.

Mind you, Amazon isn’t the first companiy to put Alexa in your head—Bose, Sony, and 66 Audio are just a few of the manufacturers offering headphones with Alexa built in—but at just $130, the Echo Buds undercut most of its competitors, most notably Apple’s ANC-less AirPods.

Amazon also touted a pair of “Day 1 Edition” wearables that will be available by invitation only.

If you fancy the idea of the ever-dutiful Alexa hovering around your head, check out the $180 Echo FramesRemove non-product link, a pair of glasses with an embedded microphone and directional speakers that allow only you to hear Alexa. Designed to work with your phone, the 31-gram Echo Frames have a VIP filter that prioritizes any messages that arrive over your handset.

Next comes the Echo Loop, a $129 smart ringRemove non-product link with dual microphones, a tiny speaker, and a haptic engine that vibrates whenever you get alerts or notifications.

Amazon also unveiled a revamped $99 Echo, complete with updated neodymium drivers drivers plus the same design as $149 Echo Plus.

We also saw the Echo Dot with Clock, a $59 version of the Echo Dot with an LED digital display that shows up from behind the standard fabric of the speaker. The new Echo Dot (and the old one isn’t going away, by the way) will be available for pre-order starting today.

Also coming soon: the Echo Show 8, a new version of the Echo Show that sits between the existing five- and eight-inch models. Available for pre-order now and slated to ship in time for the holidays, the $129 Echo Show 8 will feature the same audio quality as the other two Echo Show devices, and yes, there’s a camera shutter.

The Echo Show will arrive just in time for a new cooking service from Discovery and Food Network. Food Network Kitchen will feature live and on-demand episodes of Food Network TV, and when you see a recipe you want to try, you can ask Alexa to save it, or ask her what ingredients you’ll need.

Meanwhile, all Echo devices will be getting a new version of the Drop-In feature that lets you drop-in on everyone in your family at once, complete with a mosaic of screens showing all the participants.

Speaking of family, the kid-centric FreeTime service is coming to the Echo Show with a new interface designed expressly for the smart display, while the new Alexa Education Skill API will let parents ask Alexa how their kids did on a math quiz, or how much homework they have for tomorrow (assuming your school supports the API, of course).

Taking a page from the Philips Hue Go is the $30 Echo Glow, a spherical smart lamp due to arrive later this year that pairs with Alexa and features a variety of lighting modes, including a flickering campfire, a dimming sleep timer, and even (eventually) to disco lights.

Another nifty Echo accessory is the Echo Flex, a compact module that plugs into an AC outlet and features a small speaker for Alexa, plus a USB charging port that could host a variety of additional accessories, including a motion sensor and a nightlight. Available now for pre-order, the Echo Flex will sell for $25, while it’s accessories will go for $15.

As far as improvements to Alexa herself go, Amazon talked up its new neural text-to-speech technology, which is designed to make Alexa’s voice sound a tad less robotic. One of the benefits of the new feature: celebrity voices, including Samuel L. Jackson’s.

Alexa’s new multilingual mode will let Alexa speak different languages in the same household, starting in the U.S with Spanish and English, French and English in Canada, and Hindi and English in India.

You’ll also be able to ask, “Alexa, tell me what you just heard,” and if Alexa does something unexpected (as she’s known to do), you can ask, “Alexa, why did you do that?” for details on what just happened.

New “Hunches” (which make Alexa take note when something’s off about your daily routines or if you’ve left a door open) are coming as well, including one that warns you when batteries or printer ink might need replacing, while another will suggest new routines based on your habits.

Alexa Guard, an Alexa feature that keeps an ear out for breaking glass and other suspicious sounds, is also getting some improvements, including the ability to lock your doors, turn on your outside lights, and set herself into Away mode as soon as you say, “Alexa, I’m off to work.”

Amazon’s announcements weren’t restricted to Echo and Alexa devices. We also got an all-new, dual-band Eero mesh router with TrueMesh technology and a $99 price tagRemove non-product link, or $250 for a three-pack. Naturally, the new Eero features tight Alexa integration, allowing you to ask Alexa to pause the Wi-Fi, activate your guest Wi-Fi network, or turn off the Wi-FI for a specific device. The new Eero is on sale now, and it’s also slated to arrive in Europe starting in November.

Amazon’s line of Ring home security devices also got some new additions, including a budget-priced $60 Ring Indoor Cam and a new $100 version of the battery-powered Stick Up Cam with a 1080p camera, motion detectors, and night vision.

Amazon announced a new Ring privacy feature called Home Mode, which lets you set your Ring cameras to not record any audio or video when you’re at home.

Following up on Amazon’s Alexa-enabled microwave from last year is the $250 Alexa Smart OvenRemove non-product link, a combination microwave, convection oven, and air fryer that lets you pre-load cooking instructions by scaning pre-packaged food using your phone. The Alexa Smart Oven comes bundled with an Echo Dot, by the way.

Finally, check out the Ring Fetch, a dog tracker that leverages Amazon’s upcoming Sidewalk low-bandwidth network to warn you if Spot has wandered past a given perimeter. Look for the Fetch to arrive next year; no pricing details yet.